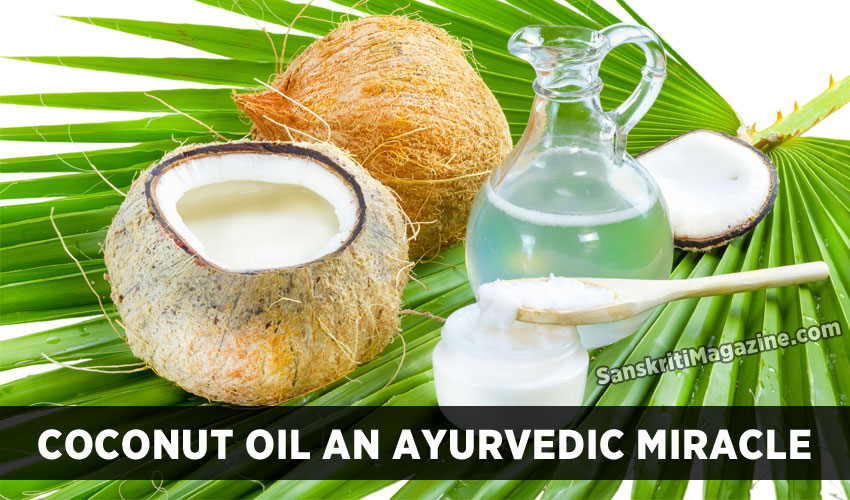 Coconut oil has been described as “the healthiest oil on earth.” That is quite a remarkable statement associated with this natural and humble oil.Wherever coconut palms grow, the people there understand the value of the food and medicine derived from the fruit. For centuries people have respected the curative properties of coconut oil.Coconut water is popular for hydration, while coconut sugar is increasingly being used as a natural and healthy sweetener. Research continues to discover more and more ways in which coconut can promote health. The benefits of one product, coconut oil, are discussed below.

Cocos nucifera is the scientific name for coconut. Spanish explorers called it coco which means “monkey face” as it has three indentations on one end of the fruit, added to which long hairy fiber resembles a monkey. Nucifera literally means “nut – bearing”.

This oil which is a rich source of fiber, minerals and vitamins has more than ninety percent saturated fats. According to Dr. Weston the saturated fats in coconut oil occur naturally and are not the artificially created fats through the man made process known as hydrogenation. In his studies he found that the people of South Pacific Island thrived on a diet high in coconut and even then, had excellent cardiovascular health, with no clogged arteries.Lauric acid, a compound found in coconut oil, is also present in mother’s milk. It helps to build the new born baby’s immune system. It is also a rich source of medium chain triglycerides. There are several health benefits of coconut oil, both when used topically and also when consumed internally.

Promotes Health and Beauty of Hair

Coconut oil can also be used topically to beautify the hair, and people in the tropical regions have been doing this for thousands of years. It can repair damaged hair, support the health of hair and scalp and its antimicrobial qualities help to inhibit the growth of dandruff-causing fungus. Many people use it as an alternative to conditioner or as a post-shower application.

These are just a few ways in which coconut oil has been found to be so good for the body. Continued research will no doubt make other links between use of this oil and treatment for other body systems as well.

Coconut oil is applied on the scalp and hair extensively in India, as it prevents dandruff when massaged on a dry scalp. It nourishes damaged hair and is used as a conditioner

Massaging the body and face with coconut oil delays wrinkles and sagging skin. It helps in curing problems like psoriasis, dermatitis, eczema and dry flaky skin. This oil is the basic ingredient for many expensive products like soaps, shampoos, creams and lotions.

Coconut oil stimulates the metabolism and improves thyroid function while it also removes the stress on the pancreas. As this oil contains short and medium range fatty acids it helps in keeping off excessive weight. According to a study in the journal “Lipids”, 40 women are said to have lost belly fat when given coconut oil in their diet along with an exercise regimen. In one study, women present with abdominal obesity were given daily supplementation with coconut oil for the course of twelve weeks. At the end of those twelve weeks, it was shown that they had increased HDL while lowering LDL cholesterol levels and experienced a reduction in both body mass index (BMI) and waist circumference. Coconut oil can thus prove to be a powerful tool in healthy weight loss.

Coconut oil although very high in saturated fats, contains 50% of lauric acid which prevents high cholesterol and high blood pressure. Unlike other vegetable oils it does not lead to increased LDL levels. It reduces the incidence of injury to arteries which will prevent atherosclerosis.

The saturated fats in coconut oil prevent growth of fungi and parasites that cause indigestion and related problems like irritable bowel syndrome. It helps in absorption of amino acids, vitamins and minerals. Coconut is rich in medium chain fatty acids (MCFA’s) which are broken down by the body more efficiently than long-chain fatty acids. This efficiency means that they require less energy and fewer enzymes to be broken down and absorbed by the body and less strain is put upon the pancreas and the digestive system as a whole. This can make it a good choice for people with digestive disorders.

When applied on wounds and cuts, coconut oil forms a shield, consequently preventing the entry of dust, bacteria and virus. It speeds up the healing process while repairing damaged tissue.

Coconut oil not only gives a wonderful flavor to foods prepared in it, it also is healthier than many other oils. That is because if an oil undergoes chemical changes while it is heated during the frying process, it can damage the body by introducing toxins and bad cholesterol. Coconut oil, however, is almost completely a saturated fat and it is much less vulnerable to heat damage.

Is an Ideal Fat

Medical research continues to support the theory that not all fats are created equal and that, far from being unhealthy, some fats can actively support physical well-being. Coconut oil is one such fat: it is low calorie, so it helps with control of the body weight. Also, it not only stimulates the metabolism but is itself digested quickly so that, unlike other fats, can provide the body with quick and easily burned energy.