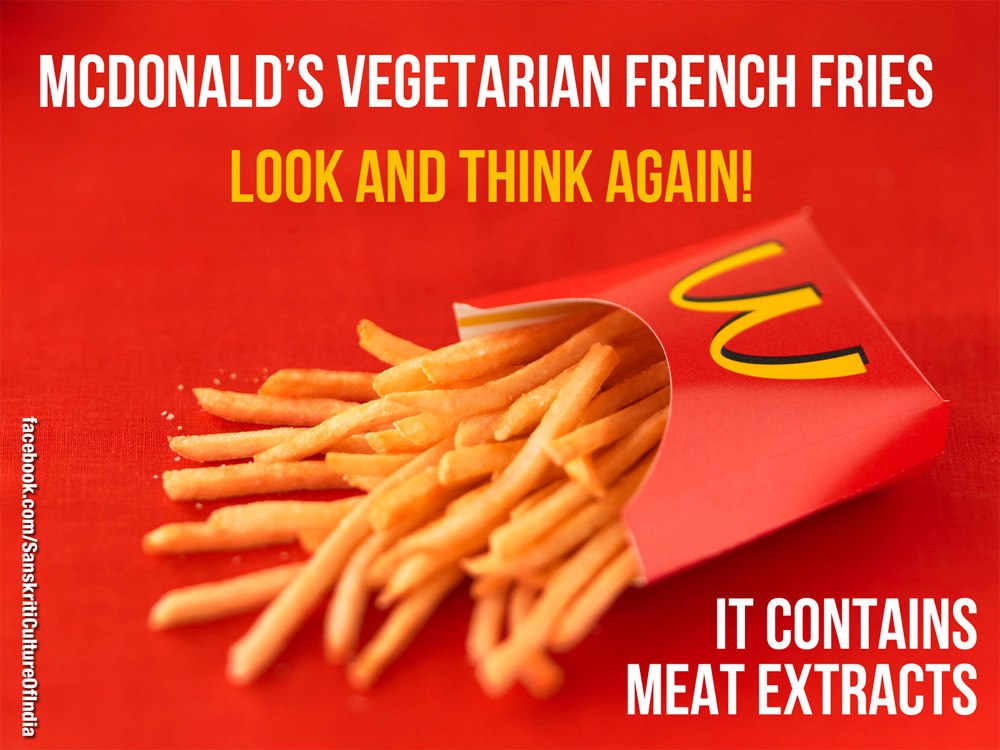 BEEF Extract in McDonald’s NOT so VEGETARIAN French Fries!

Eventually you are eating POTATOES fried in BEEF (cow) fat and many other harmful ingredients!!

Even though this fast food franchise claims since 1990 that its fries are cooked in pure vegetable oil, company spokesman Walt Riker said that McDonald’s never said its fries were appropriate for vegetarians and always told customers that their flavor comes partly from beef.

Don’t just take our word for it. Here is the latest McDonalds® nutritional guide

Harish Bharti, a Seattle lawyer who filed a suit against McDonald’s says the confirmation that the company uses beef extract to flavor its fries validates his case. Riker adds that using natural flavor as a synonym for beef extract is within federal food and drug administration guidelines.

The reason for this meat extract McDonald’s claims is that in 1990, instead of frying their potato products in beef tallow, they started to cook it in pure vegetable oil but because of the lack of beef tallow, they included a meat extract in the actual potatoes. While the fries are not cooked in beef fat anymore, they do contain a small amount of beef flavoring. It is during the par-frying process that the beef flavor is added.

The main question consumers have is WHY?! Why would McDonald’s add beef flavoring to french fries potatoes and hash browns? The taste of any fried food is largely determined by cooking oil and for years McDonald’s had cooked its fries in 93% beef tallow and 7% cottonseed oil. This mixture gave fries a distinct flavor that the world craved. When McDonald’s changed to 100% vegetable oil the taste of their fries was altered and in order to maintain the original flavor, a small amount of beef flavoring was added.

So for me this raises a question of clearness and integrity in the general restaurant and fast food business. It’s obvious that including an odd ingredient such as meat flavoring is something that a lot of people with strict diets would like to be aware of but it’s not common enough for us to be worried about. What other ingredients are included in everyday foods that we don’t know about? Why isn’t McDonalds’ finding an alternative ingredient to bring the flavor back? Does including a meat extract in the french fries alter the nutritional value of protein and fat dramatically?

French Fries – the “seasoning” added to the oil the fries are precooked in contains hydrolzyed wheat and milk
The “seasoning” is made from beef, wheat and milk, processed to break down the proteins into free amino acids like glutamate. US laws allow “natural flavoring” to consist of “protein hydrolysates” containing free glutamic acid. That’s why they do it – to free glutamate to act like MSG so they can declare a “clean label” while misleading the consumer.

Two disturbing things about McDonald’s menu is the copious use of phosphates – a food additive that was widely used to prepare before a colonoscopy but is now not used because it was found to damage the kidneys. It pulls water from the body and can cause diarrhea. Also, hydrogenated fats were everywhere on this menu. McDonalds may be bragging about cleaning up their labels by hiding MSG, but they have a long way to go to get off this avoid list.