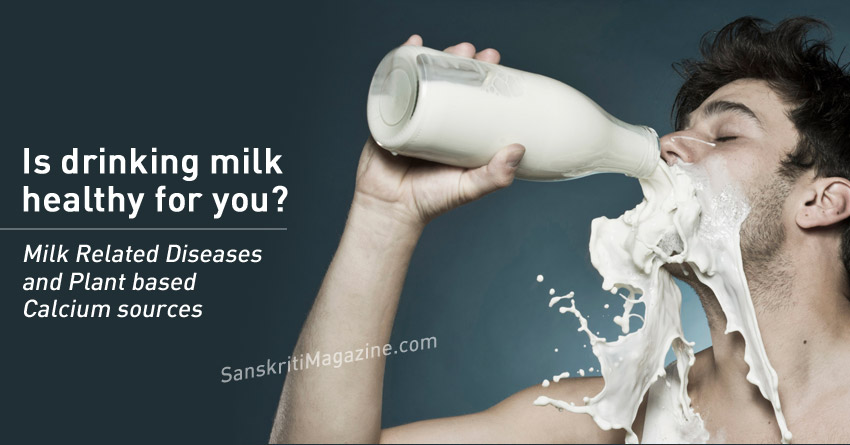 We must have probably heard and seen numerous marketing materials and programs that promote the importance , necessity and the benefits of the everyday milk use and rest of the dairy products regular intake.

Due to the size and financial power of major corporations in its manufacture, and huge impact of the dairy industry ,this wrong notion is instilled into our minds and we have created false belief.
Contrary to what they claim the diary products cow milk especially has no health, no growth and development, no ‘strong bones‘ qualities and the like advertising often connects to it.

We need to realize the truth that for years has been hidden from us, where incorruptible experts and nutritionists were trying to present to the public : Milk and dairy products are not only essential in the diet of children and adults (except in the infantile period , and primarily breast milk or possibly its replacement, free from cow’s milk ), but are more dangerous to use than any other products.

Milk Related Diseases that are in some way associated with the use of cow’s milk and other dairy products are the following :

Here are 7 reasons why all of us can consider avoiding milk:

Drink all of your milk is a phrase many people grew up hearing. Yet evidence increasingly suggests that milk is not as healthy as it has been believed to be. Health conscious people are giving up milk and turning to alternatives.

1) Milk doesn’t keep our bones healthy, preventing fractures and osteoporosis. In fact, according the Nurse’s Health Study, dairy may actually increase the risk of fractures rather than protecting our bones. Countries such as those in Africa and Asia who don’t consume large amounts of dairy actually have the lowest rates of osteoporosis.

2) Milk is not the great source of calcium that most people believe it is. First of all, pasteurizing milk kills all of the nutrients, including calcium. Second, spinach, tahini, kale and other green leafy vegetables are the best sources of calcium on the planet.

3) Milk is has been linked with acne by at least three large-scale studies reported in the American Journal of Dermatology. Research shows that there is up to 44% more chance of developing acne in those who drink milk.

4) Dairy may raise cancer risk. Research has revealed that a higher intake of dairy products may increase a man’s risk of prostate cancer by 30 to 50 percent. In addition, the body’s insulin-like growth factor-1 (IGF-1), which is a known cancer promoter is increased by drinking milk.

5) Approximately 75 percent of the world’s population is lactose intolerant, which means that they are unable to fully digest dairy. Lactase is the enzyme needed to digest lactose, and most people stop producing it around the age of 5.

6) Dairy is full of saturated fat and is linked to heart disease. Like cancer, countries such as Japan have a very low level of heart disease, and research commissioned by the New Zealand company A2 shows that there could be a link between a protein in milk.

THINK ABOUT THE CALVES

Think about what’s happening with dairy cows… they get pregnant and their bodies begin making milk for their calf (so far so good). But once the calf is born, of course it cannot drink the milk because that would defeat the whole purpose of creating profit with these beautiful commodities. So what happens? The baby calf is immediately stripped away from the mother, never to see each other again (moms, imagine that). These MOTHERS are often heard mooing hopelessly into the night in hopes of hearing back from their babies. But it gets worse. The farmers realized that the calves are worth money too – if you lock them in a crate for the first few months of their lives, then slaughter them, you can sell veal in addition to milk (extremely common in West and now in India as well).

There is no reason that would require the use of cow’s milk and dairy products in human nutrition.
Even animals stop drinking milk once they cross the infant stage, but humans continue milk consumption in some or the other form like coffee, tea etc.
In contrast, omitting these foods from your diet will be beneficial influences to your health and prevention to serious health problems and disease.

Calcium in plants  For comparison : 100 ml of cow’s milk has less than 110 mg of calcium

We all wonder and think at times that do animals have soul? Do they feel anything? Do they feel emotions? Do they even know the difference between captivity and freedom!? Well, if you also wonder about the above then do watch this small video and I am sure you will get your answer! WATCH AND SEE HOW IT FEELS LIKE TO BE FREE FOR THE FIRST TIME IN YOUR LIFE!!

We all wonder and think at times that do animals have soul? Do they feel anything? Do they feel emotions? Do they even know the difference between captivity and freedom!? Well, if you also wonder about the above then do watch this small video and I am sure you will get your answer! WATCH AND SEE HOW IT FEELS LIKE TO BE FREE FOR THE FIRST TIME IN YOUR LIFE!!

Posted by Sanskriti on Thursday, December 12, 2013