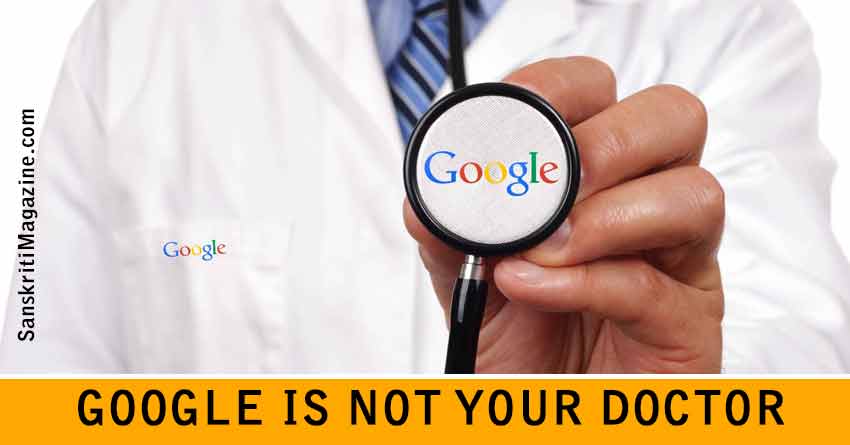 Are you among those who log in to Google every time you are down with body ache, fever or cold, only to get more confused and scared? Many young Indians with smartphones in their hands are falling prey to the “Google-as-your-doctor” phenomenon and the dangerous trend is on the rise in the country, health experts feel.

Although there is nothing wrong in checking your symptoms or trying to find more about your illness on the internet, they say that one should know where to stop.

The ideal situation is to use search engines only when someone is diagnosed with a certain medical condition and wants to know more about it. The information available on internet should be used to educate oneself rather than trying to find a cure for the disease.

“The biggest problem is that internet is loaded with enormous information which could be correct too but then your symptoms could be similar to some other disease which may cause confusion. Therefore, correct diagnosis of your health abnormality is very important,” Dr. Satnam Singh Chhabra, head (neuro-spine surgeon) at the Sir Gangaram Hospital here, told IANS.

He has observed many young Indian adults getting hooked to the internet to look for every little thing, even self-diagnosis.

For instance, if one has a health abnormality, then the instant reaction is to Google the symptoms before seeing an expert or a doctor.

“But one should be careful as people normally look for symptoms to get rid of curiosity and anxiety but to the contrary, it just worsens the scenario and leaves them more anxious,” Chhabra said.

According to Dr. (Prof) Raju Vaishya, senior consultant (orthopaedic and joint replacement surgeon) at Indraprastha Apollo Hospital, one should beware of getting trapped into “Google as your doctor” behaviour as this may cause more harm than good.

“Yes, there is an increasing surge in young Indians with smartphones who google common health symptoms. I find more such patients coming to me with queries related to hand, wrist and elbow,” Vaishya told IANS.

Dr. R K Singal of the BLK Super-specialty Hospital had an interesting case study to share: “Once a patient in his mid-30s came to me with severe headache. He told me that he thought he had a brain tumour. After diagnosis, we found that headache was due to prolonged sore throat and rhinopharyngitis (common cold).”

“The patient visited me after a month of self-diagnosis through internet. Whatever he found on the internet made him believe that he had a brain tumour,” Singal told IANS.

According to Singal, people in the 25-40 age group are more hooked on to the internet and such self-diagnosis only increases one’s anxiety.

Dr. Rahul Gupta, senior neuro and spine surgeon at Fortis Hospital in Noida, is attending to many young Indians who come to him with weird health queries after scanning Google.

“Self-medication via the internet can be dangerous. Patients at times do not follow our advice and waste our time with silly questions,” he stressed.

According to Gupta, Google is good when it comes to searching for a good doctor, checking spellings of a medication and reading about general health-related issues.

Another danger of self-diagnosis is that you may think that there is more wrong with you than there actually is.

“For example, if you had insomnia, inattention and depression, you may believe that you have a sleep disorder or major depression. Thus, you may make things worse by worrying more as well,” Singal noted.

Self-diagnosis is also a problem when you are in a state of denial about your symptoms.

One may think that generalised body aches started with a worsening of mood, but a doctor may elect to do an electrocardiogram for chest pain that reveals possible coronary artery disease, the experts felt.

Are health websites trustworthy when it comes to answering health symptom queries?

“I don’t see any harm in doing that because it’s about your health after all. In fact, a lot of times my patients come back with queries after surfing about their health abnormality on the internet,” Chhabra said.

So, educate yourself as much before or after you visit your doctor, but let the experts do their job. Let your doctor prescribe you a treatment well-suited for your ailment.

“One should be wise enough to understand which is an authentic website with relevant content as there are a lot of paid sites which exist only to make business,” Chhabra advised.

Vaishya asked youngsters to share their internet-acquired knowledge with the doctor but not to force it upon the doctor to follow it.

“Trust your doctor more than Google,” Gupta summed up.

What happen when you stop eating meat
Processed meats do cause cancer, joins tobacco, asbestos on WHO list of carcinogens
Comment