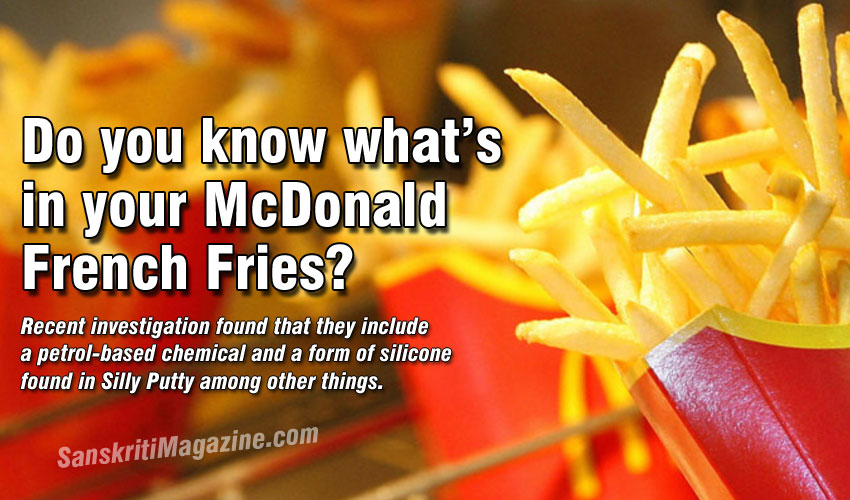 ‘Potatoes, thank goodness! That’s a good start,’ former Mythbusters host Grant Imahara says as he goes on to reveal the 13 other ingredients contained in a humble McDonald’s fry.

The TV personality traveled to the fast food chain’s potato processing plant in Idaho to see the production process from start to finish.

During his investigation he found that there are two rounds of frying.

He also discovered that dimethylpolysiloxane – a form of silicone found in Silly Putty – is used in the making of McDonald’s fries along with a petrol-based chemical called tertiary butylhydroquinone (TBHQ).

However, he reassures viewers that these are both safe additives used for perfectly good reasons.

Dimethylpolysiloxane, which Imahara struggles to pronounce, is added for safety reasons to prevent cooking oil from foaming.

While tertiary butylhydroquinone (TBHQ) is applied as a food preservative.

Imahara explains that there are numerous steps involved in the creation of McDonald’s fries.

First potatoes are harvested from fields before being peeled, cut and blanched.

They’re then fired through a cutter at up to 70 miles an hour into thin sticks.

After being chiseled into the perfect shape, the strips of potato are sauced with a blend of canola oil, soybean oil, hydrongenated soybean oil, natural beef flavor, hydrolyzed wheat, hydrolyzed milk, citric acid and dimethylpolysiloxane.

Dextrose – a natural sugar – is sprayed on the batons to help them maintain a golden fried color.

Sodium acid pyrophosphate is also added to prevent the fries from going grey.

Last but not least, salt is sprinkled on for flavor.

The fries are then flash frozen at the Simplot factory and transported to McDonald’s outlets across the country.

Once they are at restaurants, the potato sticks are fried for a second time.

The oil blend is similar to the factory mix, with the addition of tertiary butylhydroquinone and hydrogenated soybean oil – a manufactured form of trans fat.

A large serving of the finished product contains 510 calories, 6gms of protein, 24gms of fat, 67gms of carbs and 290mgms of sodium.

McDonald’s digital series ‘Our Food. Your Questions’ comes as the company fights to boost its performance in the U.S., where sales slid at established locations in the last quarter of 2014.

In addition to increased competition, McDonald’s is trying to keep up with changing tastes, with places such as Chipotle marketing their food as more wholesome alternatives.

To improve the image of its food, McDonald’s recently rolled out chicken wraps with sliced cucumbers and the option to substitute egg whites in breakfast sandwiches.

It also plans to eventually let people swap out the French fries in value meals with options like salad or vegetables.