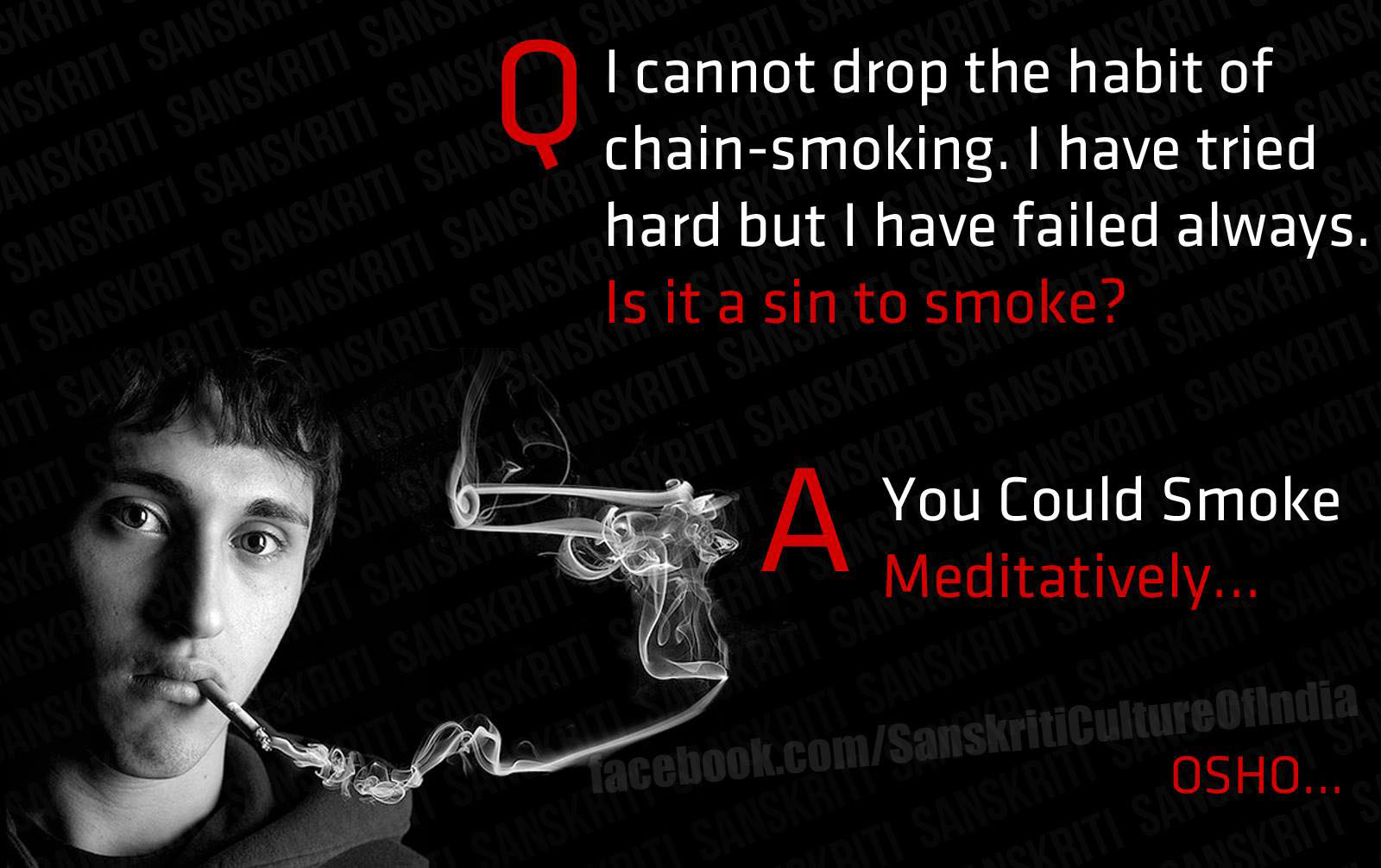 Q: I cannot drop the habit of chain-smoking. I have tried hard but i have failed always. Is it a sin to smoke?

A: Don’t make a mountain out of a molehill! Now, what are you really doing when you are smoking? Just taking some smoke inside your lungs and letting it out. It is a kind of pranayama — filthy, dirty, but still a pranayama! You are doing yoga, in a stupid way. There is only one sin and that is unawareness, and only one virtue and that is awareness.

Life is continuously changing but habits are stagnant. The more you are surrounded by habits, the more you are closed to life. You are not open, you don’t have windows. You don’t communicate with life; you go on repeating your habits. That’s the failure of your life.

Habits are all bad because habit means you are no more the deciding factor. The response is not coming out of awareness but out of a pattern that you have learned in the past.

If you really want to do something about your life, dropping smoking is not going to help — because I know people who drop smoking; then they start chewing gum or paan; it is the same. You will do something or other. Your unconsciousness will demand some activity, some occupation. And it is only a symptom; it is not really the problem.

You may have decided again and again, and again you have failed — not because smoking is such a great phenomenon that you cannot get out of it, but because you are trying from the wrong end. Rather than becoming aware of the whole situation — why you smoke in the first place — rather than becoming aware of the process of smoking, you are simply trying to drop it. It is like pruning the leaves of a tree without cutting the roots.

And my whole concern here is to cut the roots, not to prune the tree. By pruning the leaves and the branches the tree will become thicker, the foliage will become thicker. You will not destroy the tree; you will be helping it, in fact. If you really want to get out of it you will have to look deeper, not into the symptoms but the roots.

I will suggest: smoke as much as you want to smoke — just smoke meditatively. If Zen people can drink tea meditatively, why can’t you smoke meditatively? And you will be surprised: by watching your smoking, slowly smoking will become less and less. And one day suddenly…it is gone. Ah, This!