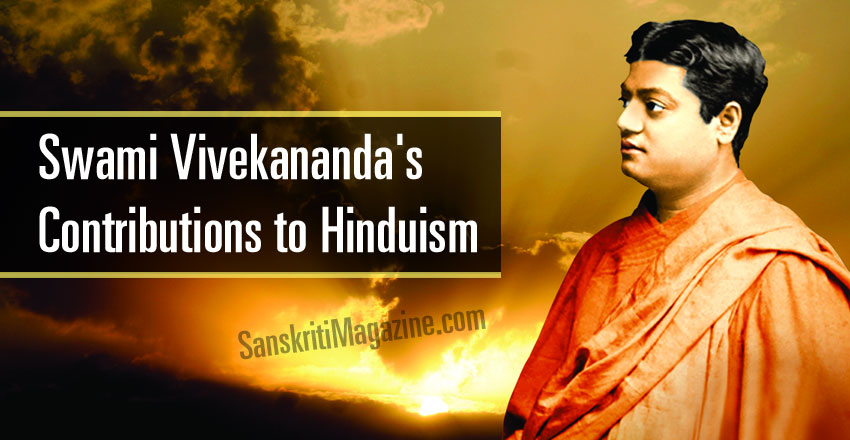 It was Swami Vivekananda who gave to Hinduism as a whole a clear-cut identity, a distinct profile. Before Swamiji came Hinduism was a loose confederation of many different sects. Swamiji was the first religious leader to speak about the common bases of Hinduism and the common ground of all sects. He was the first person, as guided by his Master Sri Ramakrishna, to accept all Hindu doctrines and the views of all Hindu philosophers and sects as different aspects of one total view of Reality and way of life known as Hinduism. Speaking about Swamiji’s role in giving Hinduism its distinct identity, Sister Nivedita wrote: “… it may be said that when he began to speak it was of ‘the religious ideas of the Hindus’, but when he ended, Hinduism had been created.”

Before Swamiji came, there was a lot of quarrel and competition among the various sects of Hinduism. Similarly, the protagonists of different systems and schools of philosophy were claiming their views to be the only true and valid ones. By applying Sri Ramakrishna’s doctrine of Harmony (Samanvaya) Swamiji brought about an overall unification of Hinduism on the basis of the principle of unity in diversity. Speaking about Swamiji’s role in this field K M Pannikar, the eminent historian and diplomat, wrote: “This new Shankaracharya may well be claimed to be a unifier of Hindu ideology.”

Another important service rendered by Swamiji was to raise his voice in defence of Hinduism. In fact, this was one of the main types of work he did in the West. Christian missionary propaganda had given a wrong understanding of Hinduism and India in Western minds. Swamiji had to face a lot of opposition in his attempts to defend Hinduism.

At the end of the 19th century, India in general, and Hinduism in particular, faced grave challenges from Western materialistic life, the ideas of Western free society, and the proselytizing activities of Christians. Vivekananda met these challenges by integrating the best elements of Western culture in Hindu culture.

A major contribution of Vivekananda to Hinduism is the rejuvenation and modernization of monasticism. In this new monastic ideal, followed in the Ramakrishna Order, the ancient principles of renunciation and God realization are combined with service to God in man (Shiva jnane jiva seva). Vivekananda elevated social service to the status of divine service.

Vivekananda did not merely interpret ancient Hindu scriptures and philosophical ideas in terms of modern thought. He also added several illuminating original concepts based on his own transcendental experiences and vision of the future. This, however, needs a detailed study of Hindu philosophy which cannot be attempted here.