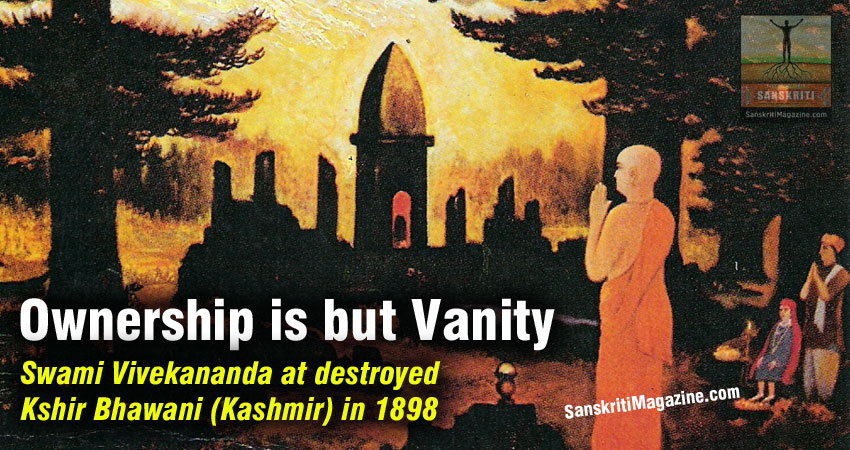 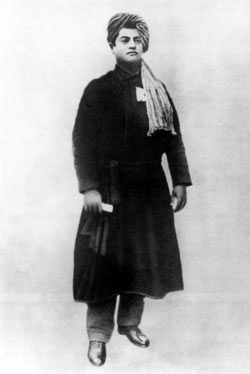 Upon the request of a disciple, Swami Vivekananda, on His return from Amarnath and other places in Kashmir was narrating about His stay in Kshir Bhavani when He said that:

He went to visit Kshir Bhavani Devi and staying there for seven days worshiped the Devi and made Homa to Her with offerings of Kshira (condensed milk). Every  day He used to worship the Devi with a mound of Kshira as offering.

One day, while worshiping, the thought arose in Swamiji’s mind: “Mother Bhavani has been manifesting Her Presence here for untold years. The Mohammedans came and destroyed Her temple, yet the people of the place did nothing to protect Her. Alas, if I were then living I could never have borne it silently.”

When, thinking in this strain, His mind was much oppressed with sorrow and anguish, He distinctly heard the voice of the Mother saying,

“It was according to My desire that the Mohammedans destroyed this temple. It is My desire that I should live in a dilapidated temple, otherwise, can I not immediately erect a seven-storeyed temple of gold here if I like? What can you do? Shall I protect you or shall you protect me!”

Swamiji said, “Since hearing that Divine voice, I cherish no more plans. The idea of building Maths etc., I have given up; as Mother wills, so it will be.”

The disciple, speechless with wonder, began to think, “Did He not one day tell me that whatever I saw and heard was but the echo of the Atman within me, that there was nothing outside?”– and fearlessly spoke it out also –”Sir, you used to say that Divine Voices are the echo of our inward thoughts and feelings.”

Swamiji gravely said, “Whether it be internal or external, if you actually hear with your ears such a disembodied voice, as I have done, can you deny it and call it false? Divine Voices are actually heard, just as you and I are talking.”

The disciple, without controverting accepted Swamiji’s word, for His words always carried conviction.