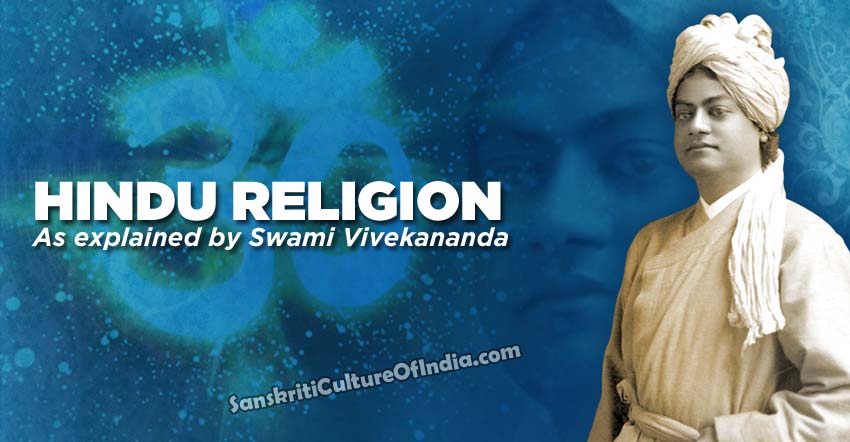 My religion is to learn. I read my Bible better in the light of your Bible and the dark prophecies of my religion become brighter when compared with those of your prophets. Truth has always been universal. If I alone were to have six fingers on my hand while all of you had only five, you would not think that my hand was the true intent of nature, but rather that it was abnormal and diseased. Just so with religion. If one creed alone were to be true and all the others untrue, you would have a right to say that that religion was diseased; if one religion is true, all the others must be true. Thus the Hindu religion is your property as well as mine. Of the two hundred and ninety millions of people inhabiting India, only two millions are Christians, sixty millions Mohammedans and all the rest are Hindus.

The Hindus found their creed upon the ancient Vedas, a word derived from Vid, “to know”. These are a series of books which, to our minds, contain the essence of all religion; but we do not think they alone contain the truths. They teach us the immortality of the soul. In every country and every human breast there is a natural desire to find a stable equilibrium — something that does not change. We cannot find it in nature, for all the universe is nothing but an infinite mass of changes. But to infer from that that nothing unchanging exists is to fall into the error of the Southern school of Buddhists and the Charvakas, which latter believe that all is matter and nothing mind, that all religion is a cheat, and morality and goodness, useless superstitions. The Vedanta philosophy teaches that man is not bound by his five senses. They only know the present, and neither the future nor the past; but as the present signifies both past and future, and all three are only demarcations of time, the present also would be unknown if it were not for something above the senses, something independent of time, which unifies the past and the future in the present.

But what is independent? Not our body, for it depends upon outward conditions; nor our mind, because the thoughts of which it is composed are caused. It is our soul. The Vedas say the whole world is a mixture of independence and dependence, of freedom and slavery, but through it all shines the soul independent, immortal, pure, perfect, holy. For if it is independent, it cannot perish, as death is but a change, and depends upon conditions; if independent, it must be perfect, for imperfection is again but a condition, and therefore dependent. And this immortal and perfect soul must be the same in the highest God as well as in the humblest man, the difference between them being only in the degree in which this soul manifests itself.

But why should the soul take to itself a body? For the same reason that I take a looking – glass — to see myself. Thus, in the body, the soul is reflected. The soul is God, and every human being has a perfect divinity within himself, and each one must show his divinity sooner or later. If I am in a dark room, no amount of protestation will make it any brighter — i must light a match. Just so, no amount of grumbling and wailing will make our imperfect body more perfect. But the Vedanta teaches — call forth your soul, show your divinity. Teach your children that they are divine, that religion is a positive something and not a negative nonsense; that it is not subjection to groans when under oppression, but expansion and manifestation.

Every religion has it that man’s present and future are modified by the past, and that the present is but the effect of the past. How is it, then, that every child is born with an experience that cannot be accounted for by hereditary transmission? How is it that one is born of good parents, receives a good education and becomes a good man, while another comes from besotted parents and ends on the gallows? How do you explain this inequality without implicating God? Why should a merciful Father set His child in such conditions which must bring forth misery? It is no explanation to say God will make amends later on — god has no blood – money. Then, too, what becomes of my liberty, if this be my first birth? Coming into this world without the experience of a former life, my independence would be gone, for my path would be marked out by the experience of others. If I cannot be the maker of my own fortune, then I am not free. I take upon myself the blame for the misery of this existence, and say I will unmake the evil I have done in another existence. This, then, is our philosophy of the migration of the soul. We come into this life with the experience of another, and the fortune or misfortune of this existence is the result of our acts in a former existence, always becoming better, till at last perfection is reached.

We believe in a God, the Father of the universe, infinite and omnipotent. But if our soul at last becomes perfect, it also must become infinite. But there is no room for two infinite unconditional beings, and hence we believe in a Personal God, and we ourselves are He. These are the three stages which every religion has taken. First we see God in the far beyond, then we come nearer to Him and give Him omnipresence so that we live in Him; and at last we recognise that we are He. The idea of an objective God is not untrue — in fact, every idea of God, and hence every religion, is true, as each is but a different stage in the journey, the aim of which is the perfect conception of the Vedas. Hence, too, we not only tolerate, but we Hindus accept every religion, praying in the mosque of the Mohammedans, worshipping before the fire of the Zoroastrians, and kneeling before the cross of the Christians, knowing that all the religions, from the lowest fetishism to the highest absolutism, mean so many attempts of the human soul to grasp and realise the infinite, each determined by the conditions of its birth and association, and each of them marking a stage of progress. We gather all these flowers and bind them with the twine of love, making a wonderful bouquet of worship.

If I am God, then my soul is a temple of the Highest, and my every motion should be a worship — love for love’s sake, duty for duty’s sake, without hope of reward or fear of punishment. Thus my religion means expansion, and expansion means realisation and perception in the highest sense — no mumbling words or genuflections. Man is to become divine, realising the divine more and more from day to day in an endless progress.*

*Summary of a lecture delivered before the Ethical Society, Brooklyn, at the Pouch Gallery in Clinton Avenue, on the 30th December, 1894. Reproduced from the Brooklyn Standard Union.

What is religion – Swami Vivekananda
Buddhism: The fulfilment of Hinduism
Comment