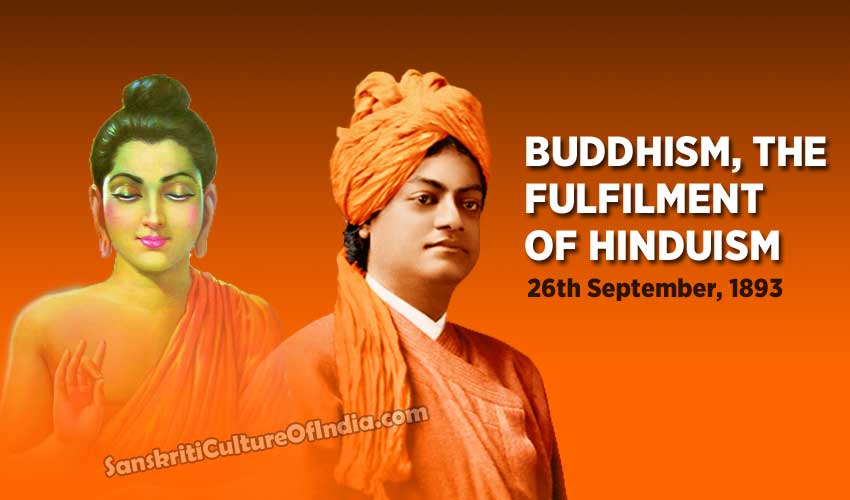 I am not a Buddhist, as you have heard, and yet I am. If China, or Japan, or Ceylon follow the teachings of the Great Master, India worships him as God incarnate on earth. You have just now heard that I am going to criticise Buddhism, but by that I wish you to understand only this. Far be it from me to criticise him whom I worship as God incarnate on earth. But our views about Buddha are that he was not understood properly by his disciples. The relation between Hinduism (by Hinduism, I mean the religion of the Vedas) and what is called Buddhism at the present day is nearly the same as between Judaism and Christianity. Jesus Christ was a Jew, and Shakya Muni was a Hindu.

The Jews rejected Jesus Christ, nay, crucified him, and the Hindus have accepted Shakya Muni as God and worship him. But the real difference that we Hindus want to show between modern Buddhism and what we should understand as the teachings of Lord Buddha lies principally in this: Shakya Muni came to preach nothing new. He also, like Jesus, came to fulfil and not to destroy. Only, in the case of Jesus, it was the old people, the Jews, who did not understand him, while in the case of Buddha, it was his own followers who did not realize the import of this teachings. As the Jew did not understand the fulfilment of the Old Testament, so the Buddhist did not understand the fulfilment of the truths of the Hindu religion. Again, I repeat, Shakya Muni came not to destroy, but he was the fulfilment, the logical conclusion, the logical development of the religion of the Hindus.

Shakya Muni himself was a monk, and it was his glory that he had the large – heartedness to bring out the truths from the hidden Vedas and throw them broadcast all over the world. He was the first being in the world who brought missionarising into practice — nay, he was the first to conceive the idea of proselytising.

The great glory of the Master lay in his wonderful sympathy for everybody, especially for the ignorant and the poor. Some of his disciples were Brahmins. When Buddha was teaching, Sanskrit was no more the spoken language in India. It was then only in the books of the learned. Some of Buddha’s Brahmin disciples wanted to translate his teachings into Sanskrit, but he distinctly told them, “I am for the poor, for the people; let me speak in the tongue of the people.” And so to this day the great bulk of his teachings are in the vernacular of that day in India. Whatever may be the position of philosophy, whatever may be the position of metaphysics, so long as there is such a thing as death in the world, so long as there is such a thing as weakness in the human heart, so long as there is a cry going out of the heart of man in his very weakness, there shall be a faith in God.

On the philosophic side the disciples of the Great Master dashed themselves against the eternal rocks of the Vedas and could not crush them, and on the other side they took away from the nation that eternal God to which every one, man or woman, clings so fondly. And the result was that Buddhism had to die a natural death in India. At the present day there is not one who calls oneself a Buddhist in India, the land of its birth. But at the same time, Brahminism lost something — that reforming zeal, that wonderful sympathy and charity for everybody, that wonderful leaven which Buddhism had brought to the masses and which had rendered Indian society so great that a Greek historian who wrote about India of that time was led to say that no Hindu was known to tell an untruth and no Hindu woman was known to be unchaste.

Hinduism cannot live without Buddhism, nor Buddhism without Hinduism. Then realize what the separation has shown to us, that the Buddhists cannot stand without the brain and philosophy of the Brahmins, nor the Brahmin without the heart of the Buddhist. This separation between the Buddhists and the Brahmins is the cause of the downfall of India. That is why India is populated by three hundred millions of beggars, and that is why India has been the slave of conquerors for the last thousand years. Let us then join the wonderful intellect of the Brahmins with the heart, the noble soul, the wonderful humanizing power of the Great Master.

Swami Vivekananda’s Guide to Living Life to the Fullest

Shivaji through the eyes of Swami Vivekananda