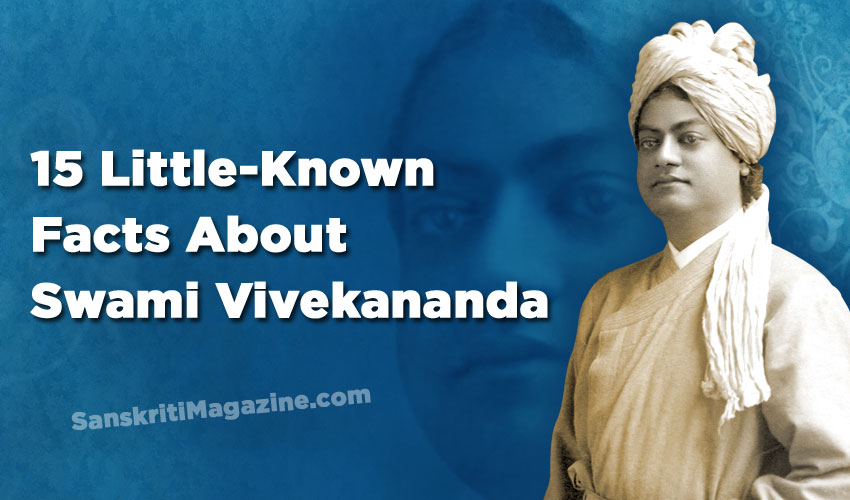 1.  The great figure who toured America and England and was known for his brilliant eloquence scored only a 47% at the university entrance level examination, a 46% in the FA (later this exam became Intermediate Arts or IA), and a 56% in his BA exam.

2.  After his father’s death, the family was reduced to poverty. On many mornings Vivekananda would tell his mother that he had lunch invitations and he would go out so the others would get a larger share. He writes, “On such days, I had very little to eat, sometimes nothing at all. I was too proud to tell anyone…”

3.  Taking advantage of his penury, many well-to-do ladies who were enamored of him tried to woo him. He preferred to starve than fall for such temptations. To one such lady he said, “Shun these worthless desires and call upon God.”

4.  In spite of his BA degree, Narendranath (Vivekananda’s real name) had to go from door to door in search of employment. He would loudly proclaim, “I am unemployed” to those who asked him. His faith in god shook and he began to tell people rather aggressively that God does not exist. One neighbor complained, “There is a young fellow living in that house. I have never seen such a conceited fellow! He is too big for his boots – and all because he has a BA degree! When he sings, he even strikes the table arrogantly and struts around smoking cheroot before all the elders…”

5.  After the death of his paternal uncle Taraknath, his wife Gyanadasundari ousted Vivekananda’s family from their ancestral house and filed a suit in the court. Vivekananda fights the various litigation suits for 14 years and on the last Saturday of his life on 28 June 1902 he puts an end to the court case after paying some financial compensation.

6.  When Jogendrabala, his sister committed suicide, Vivekananda told Yogen Maharaj, “Do you know why we Duttas are so talented in our thinking? Ours is a family with a history of suicides. There have been many in our family who have taken their own lives. We are eccentric. We do not think before we act. We simply do what we like and do not worry about the consequences.

7.  The Maharaja of Khetri, Ajit Singh, used to send 100 rupees to Swamiji’s mother on a regular basis to help her tide over her financial problems. This arrangement was a closely guarded secret.

8.  He simply worshiped his mother. After his Chicago fame, when Pratap Mazoomdar viciously condemned him, “He is nothing but a cheat and a fraud. He comes here to tell you that he is a fakir,” Vivekananda responded in a letter to Isabelle McKindley – “Now, I do not care what they even my own people say about me – except for one thing. I have an old mother. She has suffered much in her life and in the midst of all she could bear to give me up for the service of God and man; but to have given up the most beloved of her children – her hope – to live a beastly immoral life in a far-distant country, as Mazoomdar was telling in Calcutta, would have simply killed her.”

9.  No women, not even his mother, were allowed inside the monastery. Once when he was delirious with fever his disciples fetched his mother. Seeing her Vivekananda shouted, “Why did you allow a woman to come in? I was the one who made the rule and it is for me that the rule is being broken!”

10.  Vivekananda was a connoisseur of tea. In those days when the Hindu pandits were opposed to drinking tea, he introduced tea into his monastery. Bally municipality increased taxes on Belur on the grounds that it was a ‘private garden house’ where tea was served. Vivekananda sued the municipality in Chinsurah Zilla District Court. The British magistrate came on horseback to investigate. Now, who can beat the British at tea drinking? The charges were dismissed.

11.  Vivekananda once convinced Bal Gangadhar Tilak, the great freedom fighter, to make tea at Belur Math. Tilak brought nutmeg, mace, cardamom, cloves and saffron with him and prepared Mughlai tea for all.

12.  Vivekananda’s tireless service to man and God took a toll on his physical body. In all his 39 years, he suffered from various ailments – migraines, tonsillitis, diphtheria, asthma, typhoid, malaria, other persistent fevers, body heating up after dinner, liver problem, indigestion, gastroenteritis, accumulation of water in the stomach, dysentery and diarrhea, dyspepsia and abdominal pain, gallstone, lumbago, neck pain, Bright’s disease (acute nephritis), kidney problem, dropsy, albuminuria, bloodshot eyes, loss of vision in his right eye, chronic insomnia, inability to bear heat, premature greying of hair, neurasthenia, excessive fatigue, sea sickness, sunstroke, diabetes, heart problems. His motto, “One has to die…it is better to wear out than to rust out.”

13.  Towards the end of his brief life he advised his disciples, “Learn from my experiences. Don’t be so hard on your body and ruin your health. I have harmed mine. I have tortured it severely, and what has been the result? My body has become ruined during the best years of my life! And I am still paying for it.” When one of his disciples asked him why he ignored his health, he replied he had no sense he has a body when he was in America.

14.  Vivekananda hated cowards. He writes to John P. Fox, “I like boldness and adventure and my race stands in need of that spirit very much…my health is failing and I do not expect to live long.”

15.  In 1900 two years before his death when he arrived in India from the West for the last time, he hurried to Belur to be with his disciples or gurubhais. He heard the dinner gong but found the gate locked. He climbed over it and quickly made his way to the dining area to eat his favorite dish khichuri. No one suspected his rapidly failing health.

~ Excerpts based on the book “The Monk as Man: The Unknown Life of Swami Vivekananda” by Sankar