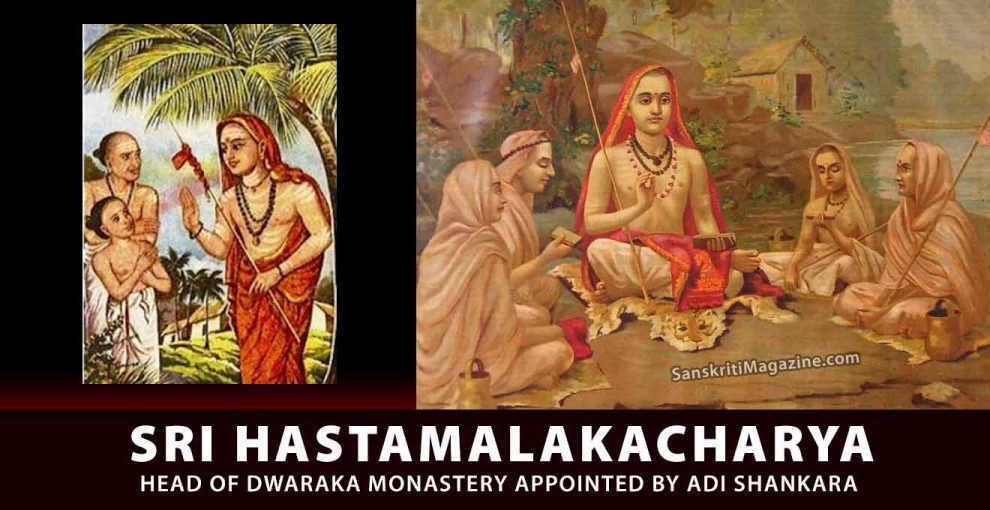 In the early part of the 9th century, when Adi Shankaracharya was wandering in the southern part of the India, he happened to pass through a village called Sri Bali (Shivalli, near Udupi in present day India).

In that village there was a pious and learned Brahmin named Prabhakara, he had a 13 year old son who had a pleasant, angel like face; his actions appeared rather strange to the people around. So they thought that the boy was simply an idiot.

The boy was now 13 year old and he never spoke a word. So everyone believed him to be dumb. When Prabhakara (the boy’s father), heard of this sage who would be visiting his village, he went to see Adi Shankara and requested him to come to his house and bless the unfortunate child.

Lord Shankara visited brahmin’s house and saw the child sitting outside quietly. When the boy saw this true sage, he prostrated in front of him.

Lord Shankara knowing the child to be a spiritually advanced soul, asked the boy “My child! why don’t you talk?”

“What about?” The child replied to everyone’s surprise. “It is of no use to speak, ‘that which is’ (referring to God) can’t be grasped through words”

“Tell me, who are you?” questioned Lord Shankara with the intention of letting everyone know about the greatness of the child.

The boy composed 12 Sanskrit verses summarizing the teachings of Vedanta on the nature of ‘SELF’, thus answering Adi Shankara’s question.

Lord Shankara took him as his disciple with his parents’ consent and walked to the next village with his battalion.

Later Adi Shankara established 4 monasteries, and named the boy who was now called ‘Hastamalaka’ as the head of Dwaraka Monastery. Hastamalaka also wrote extensively on spiritual subjects, his own Guru Shankara wrote commenteries on some of the works of Hastamalaka.

Hastamalaka=Hasta (palm)+ Amlaka (gooseberry fruit); Hastamalaka is one who has the knowledge of the Brahman (God) comfortably like a fruit in his palm. The word ‘Karatalamalaka’ also means the same.

Vedic Traditions are the parents of all humanity
Nava Brahma Temples at Alampur, Telangana
Comment