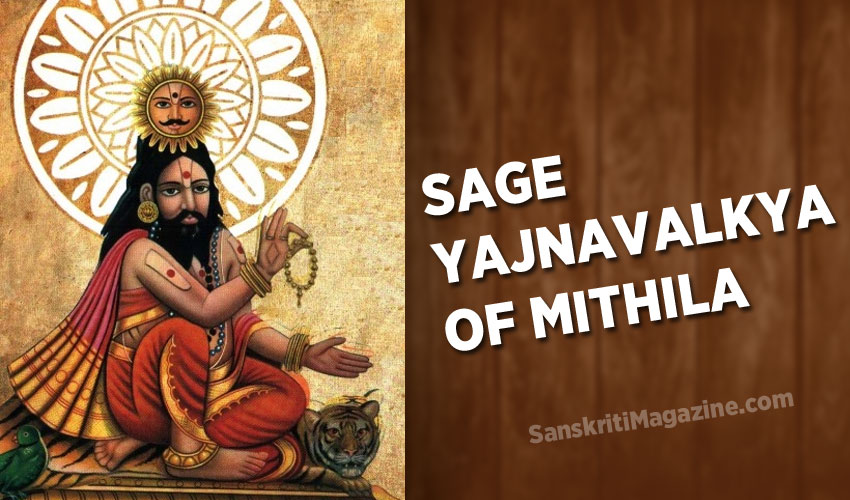 The name of Yajnavalkya of Mithila stands distinguished both in the Srutis and in the Smritis. Yajnavalkya is especially known for his unsurpassed spiritual wisdom and power. The seer of a Veda Samhita from Bhagavan Surya, the revealer of Brahma Jnana to Janaka, Maitreyi and others, Yajnavalkya hails supreme among sages of sacred memory. As to his obtaining the Shukla Yajurveda Samhita from Bhagavan Surya, there is the following history.

Then Vaishampayana said to his disciples, “Now I have to expiate this great sin of Brahmahatya. Therefore, you all will observe, for my sake, an expiatory penance for seven days”.

At once Yajnavalkya stood up and said, “O Guru! All these are poor-spirited young students. They will not be able to undergo such a hard penance. So, instead of all, I myself alone shall observe it in the manner in which nobody else can”. Vaishampayana told Yajnavalkya not to undertake it alone. But Yajnavalkya persisted. The preceptor was offended at this audacious attitude of the disciple and said, “O proud one, you are very conceited. You get away from me. Enough of you who is disposed to despise wise Brahmins. Give back to me immediately whatever you have learnt from me”.

Upon the order of the Guru, Yajnavalkya, the son of Devarata, vomited out the collection of the Yajus in the form of food. The other disciples ate that food taking the form of the Tittiri birds, because they were very eager to receive the same. They then had the direct revelation of those Yajurveda collections. As the Tittiri birds ate this Veda, it is thenceforth called the Taittiriya Yajurveda. It is also known as Krishna (black) Yajurveda on account of its being vomited substance.

Then Yajnavalkya determined not to have any human Guru thereafter. Thus he began to propitiate the Sun-God, Surya. Yajnavalkya worshipped and extolled the Sun, the master of the Vedas, for the purpose of acquiring the fresh Vedic portions not known to his preceptor, Vaishampayana.

Yajnavalkya said, “Prostration to the glorious Aditya, who in the form of the Atman, abides in all beings. I bow to Him who surrounds all like Akasa, who is one and not separated or distanced by limiting conditions. O Great God, O Creator, I contemplate upon that glowing sphere which lights and warms the whole world! O God who burns all miseries wrought by unrighteous activities, who burns ignorance which is the seed of activity! O Lord, I worship Thy lotus-like feet praised and worshipped by the rulers of the three worlds. Give me those portions of the Veda which are not known to others”.

The Sun-God, the glorious Lord Hari, pleased with Yajnavalkya’s penance, assumed the form of a horse and taught the sage such fresh portions of the Yajurveda as were not known to any other. This portion of the Yajurveda goes by the name of Shukla Yajurveda. It is also known as Vajasaneya Yajurveda, because it was evolved in great rapidity by Surya in the form of a horse through his manes. Yajnavalkya divided this Vajasaneya Yajurveda again into fifteen branches, each branch comprising hundreds of Yajus Mantras. Kanva, Madhyandina and others learnt those branches.

Yajnavalkya married two wives. One was Maitreyi and the other Katyayani. Of the two, Maitreyi was a Brahmavadini. When Yajnavalkya wished to divide his property between the two wives before starting for the fourth Ashrama of his life, Maitreyi asked whether she could become immortal through wealth. Yajnavalkya replied that there was no hope of immortality through wealth and that she would only become one among the many who were well-to-do on earth. On hearing this, Maitreyi requested Yajnavalkya to teach her what he considered as the best. Then Yajnavalkya elaborately described to her the sole greatness of the Absolute Self, the nature of Its existence, the way of attaining infinite knowledge and immortality, etc. This immortal conversation between Yajnavalkya and Maitreyi is recorded in the Brihadaranyaka Upanishad. The central theme of the discourse is this: “All things are dear, not for their sake, but for the sake of the Self. This Self alone exists everywhere. It cannot be understood or known, for It alone is the Understander and the Knower. Its nature cannot be said to be positively as such. It is realised through endless denials as ‘not this, not this’. The Self is self-luminous, indestructible, unthinkable”.

The other wife Katyayani, the daughter of Bharadhwaja, was of common intelligence, and through her Yajnavalkya had three sons—Chandrakanta, Mahamegha and Vijaya.

Yajnavalkya, though a great Brahmajnani, was a great Karmakandi too. He caused many Yajnas to be performed and himself became the Acharya of those great Yajnas. He was a celebrated Srotriya and a Brahma-nishtha Guru. Once King Janaka of Videha wanted to know from which real Brahmanishtha to receive Brahma Vidya. In order to find out who was the real Brahma-nishtha, Janaka performed a huge Bahu-dakshina sacrifice to which all the Rishis from far and wide were invited. And he offered one thousand cows with their calves, all their horns being decked with enormous gold. Then he proclaimed to the assembled ones, “Whosoever is the best Brahmana amongst you may drive these cows home”. None dared to get up and take away the cows as they were afraid of censure by the others. But Yajnavalkya stood up and asked his disciple Samasravas to drive the cows home.

The other Brahmanas got angry at this and said to one another, “How can he declare himself to be the best among us?”. Thereupon several Rishis challenged Yajnavalkya with many questions on transcendental matters to all of which Yajnavalkya gave prompt reply. There was a great debate in which Yajnavalkya won over all the others. Janaka was convinced that Yajnavalkya was the best Brahma-nishtha and received Brahma Vidya from him thereafter.

The third and the fourth chapters of the Brihadaranyaka Upanishad abound with the great philosophical teachings of Yajnavalkya. Yajnavalkya was also the author of the famous Yajnavalkya Smriti. His other works areYajnavalkya Shakha, Pratijna Sutra, Satapatha Brahmana, and Yoga-Yajnavalkya.

In the end, Yajnavalkya took Vidvat Sannyasa (renunciation after the attainment of the knowledge of Brahman) and retired to the forest.

Yajnavalkya was one of the greatest sages ever known. We find him arguing with and overcoming even his teacher Uddalaka at the court of Janaka. His precepts as contained in the Upanishads stand foremost as the crest-jewel of the highest teachings on Brahma Vidya.

~ Sri Swami Sivananda, from the book “Lives of Saints”

Life of a Sant: Surdas

The 24 Gurus we can find in Nature
Ramana Maharishi: Most important question in life
Comment