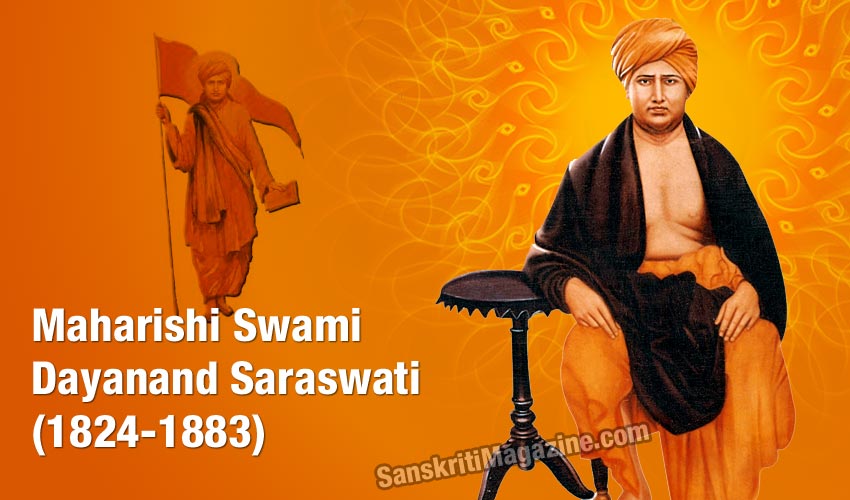 Maharishi Swami Dayanand Saraswati was a Hindu spiritual leader and social reformer of the 19th century most famous as the founder of the Hindu reform organization Arya Samaj.

Back to the Vedas

Swami Dayanand was born on February 12, 1824 in Tankara in the western Indian state of Gujarat. At a time when Hinduism was divided between the various schools of philosophy and theology, Swami Dayanand went straight back to the Vedas as he considered them the most authoritative repository of knowledge and truth spoken in the “Words of God.” In order to re-energize Vedic knowledge and reawaken our awareness of the four Vedas – Rig Veda, Yajur Veda, Sama Veda, and Atharva Veda – Swami Dayanand wrote and published a number of religious books, primary among them being Satyartha Prakash, Rig-Vedaadi, Bhasya-Bhoomika, andSanskar Vidhi.

The Message of Swami Dayanand

Swami Dayanand’s main message – “Back to the Vedas” – formed the bedrock of all his thoughts and actions. In fact, he spent a lifetime preaching against many Hindu customs and traditions that were meaningless and oppressive, according to him. These included practices such as idol worship and polytheism, and such social stigma as casteism and untouchability, child marriage and forced widowhood, which were prevalent in the 19th century.

Swami Dayanand showed the Hindus how going back to the roots of their faith – the Vedas – they can improve their lot as well as the social, political, and economic conditions of the then India. While he had millions of followers, he also attracted many a detractor and enemy. As the legend goes, he was poisoned many times by orthodox Hindus, and one such attempt proved fatal and he succumbed to death in 1883. What he left behind was one of Hinduism’s greatest and most revolutionary organizations, the Arya Samaj.

Swami Dayanand founded the Hindu reform organization called Arya Samaj on April 7, 1875 in Mumbai, and also created its 10 principles which are quite distinct from Hinduism, yet based on the Vedas. These principles aimed at advancing the individual and society through physical, spiritual and social betterment of the human race. His aim was not to found a new religion, but to re-establish the teachings of the ancient Vedas. As he said in Satyarth Prakash, he wanted to true development of humankind by the acceptance of the Supreme truth and rejection of falsehood by through analytical thinking.

About the Arya Samaj

The Arya Samaj was established by Swami Dayanand in 19th century India. Today, it is a global organization that teaches the true Vedic religion, which is at the core of Hinduism. The Arya Samaj can best be termed as a socio-cultural organization born out of a reform movement within Hinduism. It is “non-denominational authentic Hindu-Vedic religious organization dedicated to remove superstition, orthodoxy and social evils from societ,” and its mission is to “mold the lives of its members and all others according to the message of the Vedas with reference to the circumstances of time and place.”

The Arya Samaj is also engaged in voluntary activities, especially in the areas of education, and has opened numerous schools and colleges across India based on its universal values. The Arya Samaj community is prevalent in many countries around the world including Australia, Bali, Canada, Fiji, Guyana, Indonesia, Mauritius, Myanmar, Kenya, Singapore, South Africa, Surinam, Thailand, Trinidad & Tobago, UK, and the United States.

10 Principles of the Arya Samaj

Life of a Sant: Surdas