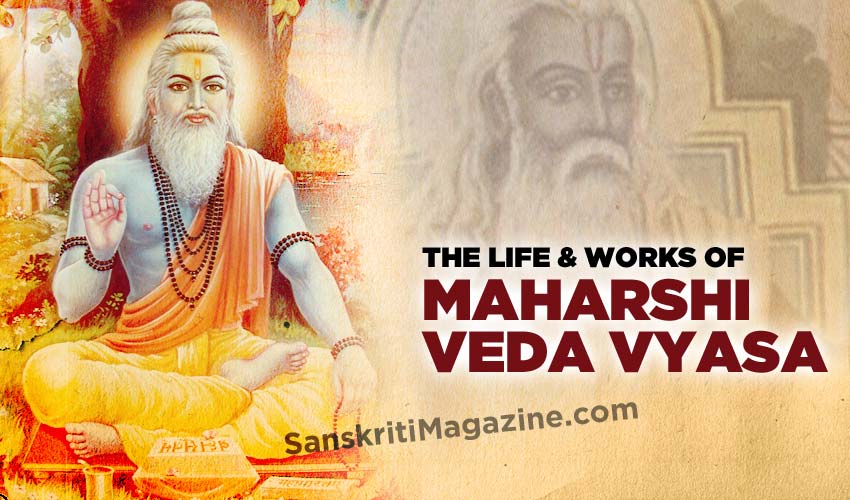 Vyasa is perhaps the greatest sage in the history of Hindu religion. He edited the four Vedas, wrote the 18 Puranas, the epic Mahabharata and the Srimad Bhagavata and even taught Dattatreya, who is regarded as the ‘Guru of Gurus.’

Hinduism mentions as many as 28 Vyasas before Maharshi Veda Vyasa was born at the end of Dvapara Yuga. Also known as Krishna Dvaipayana, Vyasa was born of Sage Parashara and mother Satyavati Devi under wonderful circumstances. Parashara was one of the supreme authorities on astrology and his bookParashara Hora is a textbook on astrology even in the modern age. He has also written a scripture known as Parashara Smriti which is held in such high esteem that it is quoted even by modern scholars on sociology and ethics.

How Vyasa was Born

Vyasa’s father, Parashara came to know that a child, conceived at a particular moment of time, would be born as the greatest man of the age as a part of Lord Vishnu himself. On that eventful day, Parashara was travelling in a boat and he spoke to the boatman about the nearing of that auspicious time. The boatman had a daughter who was awaiting marriage. He was impressed with the sanctity and greatness of the sage and offered his daughter in marriage to Parashara. Vyasa was born of this union and his birth is said to be due to the wish of Lord Shiva, who blessed the birth the sage of the highest order.

The Life and Works of Vyasa

At a very tender age Vyasa revealed to his parents the purpose of his life — that he should go to the forest and practice ‘Akhanda Tapas’ or continuous penance. At first, his mother did not agree but later approved on one important condition that he should appear before her whenever she wished for his presence. According to the Puranas, Vyasa took initiation from his guru sage Vasudeva. He studied the Shastras or scriptures under the sages Sanaka and Sanandana and others. He arranged the Vedas for the good of mankind and wrote theBrahma Sutras for the quick and easy understanding of the Shrutis; he also wrote theMahabharata to enable common people to understand the highest knowledge in the easiest way. Vyasa wrote the 18 Puranas and established the system of teaching them through ‘Upakhyanas’ or discourses. In this way, he established the three paths of Karma, Upasana (devotion) and Jnana (knowledge). Vyasa’s last work was the Bhagavata which he undertook at the instigation of Devarshi Narada, the celestial sage, who once came to him and advised him to write it, without which, his goal in life would not be reached.

In ancient times, our forefathers in India, went to the forest to meditate during the four months or ‘Chaturmasa’ following Vyasa Purnima—a particular and important day in the Hindu calendar. On this auspicious day, Vyasa began to write his Brahma Sutras. This day is also known as Guru Purnima when, according to the scriptures, Hindus should worship Vyasa and the Brahmavidya Gurus and begin the study of the Brahma Sutras and other ancient books on ‘wisdom’.

Vyasa, Author of the Brahma Sutras

The Brahma Sutras, also known as the Vedanta Sutras is believed to have been written by Vyasa along with Badarayana. They are divided into four chapters, each chapter being subdivided again into four sections. It is interesting to note that they begin and end with Sutras which read together mean “the inquiry into the real nature of Brahman has no return”, pointing to “the way one reaches Immortality and no more returns to the world.” About the authorship of these Sutras, tradition attributes it to Vyasa. Sankaracharya refers to Vyasa as the author of the Gita and the Mahabharata, and to Badarayana as the author of the Brahma Sutras. His followers—Vachaspathi, Anandagiri and others—identify the two as one and the same person, while Ramanuja and others attribute the authorship of all three to Vyasa himself.

The Everlasting Influence of Vyasa

Vyasa is considered by all Hindus as Chiranjivi or immortal, one who is still living and walking the earth for the well-being of his devotees. It is said that he appears to the true and the faithful and that Adi Sankaracharya had his darshan as did many others as well. Vyasa’s life is a unique example of one born for the dissemination of spiritual knowledge. His writings inspire us and the whole world even to this day in innumerable ways.

Reference: This article is based on the writings of Swami Sivananda in the “Lives of Saints” (1941)