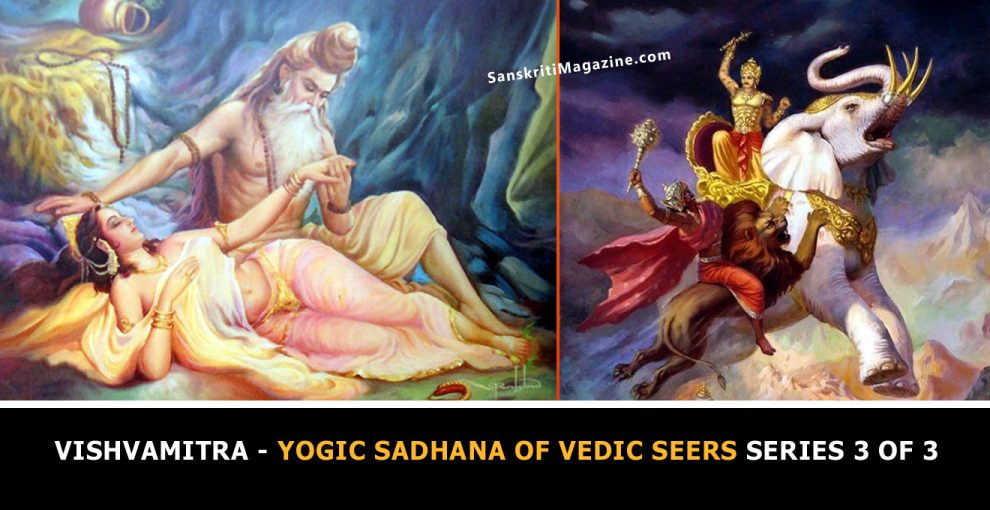 As has already been indicated, if Vishvamitra’s yogic sadhana starts with meditation on Agni as the universal consciousness and comes to its consummation in the realization of Savitr as the stimulator of the supernal consciousness, his sadhana on Indra concerns the intermediate course of his life which is full of ups and downs. Indra represents that aspect of the Divine which assumes all forms in the universe through His own personality. In order to accomplish this onerous task, He, in the form of Indra moves between the heaven and the earth so speedily as to take three rounds of 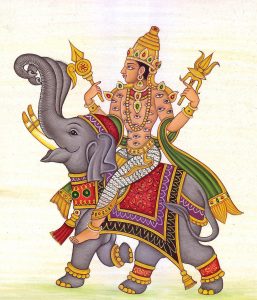 Thus, Indra, in Vishvamitra’s perception is the dynamics of the Divine responsible for making the world emerge out of Him. It is in this capacity that he happens to be prayed to in one of his mantras by Vishvamitra to inquire of him whether he wants to make the guardian of the people, their ruler or to transform him into a seer so as to be able to relish Soma and be initiated in the wealth of immortality.

It is perhaps this mantra as supplemented by a few others which has formed the source of so many legends relating to Vishvamitra. As is evident from the mantra, the seer in his prayer to the deity puts forth two alternative aspirations, i.e. kingship on the one hand and seerhood on the other. In the capacity of the king as the mantra tells us, he looks forward to give protection to people and lead a royal life amidst them. On the other hand, if he is elevated to seerhood, he would have the privilege of experiencing the supernal delight and attaining immortality in that delightful experience. Since the latter alternative comes in supersession of the former, he, in the epic legend is said to have relinquished his kingship in the interest of seerhood. Shift from kingship to seerhood is sure to have involved a lot of inner conflict, determination, ups and downs.

This is evident from the legend as found in the epics, i.e. the Ramayana and the Mahabharata. Vishvamitra as a king enters into conflict with Vashistha, the seer for taking away the cow of his wisdom by means of his royal force and fails in the venture. With the painful realization that the wisdom of eternal delight cannot be acquired by physical force, he turns to tapas amounting to practice of abdication of the physical and taking resort to the path of spirituality or yoga. Since 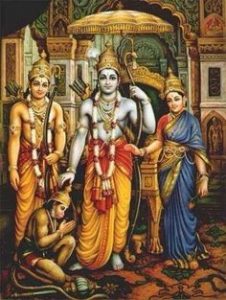 he had taken retirement from kingship not so much willingly but as a matter of reaction and sense of rivalry, it was but natural for him to be faced with revolt of his desires having full swing earlier but now sought to be repressed completely. This is most probably the secret of his seduction by Menaka, the heavenly damsel said to have been sent by Indra for the purpose.

How Indra representing the dynamics of the Creator happened to be assigned this dubious role has its basis in a couple of mantras seen by Vishvamitra himself. In one of these mantras, he prays to Indra to rejoice in his prayer and accept his sacrificial cake as the wooer having it obligatory for him to accept the lady whom he woos as his wife (Ibid. III.52.3). The erotic simile used here is meant simply for injecting intensity into the aspiration for the Divine in the form of Indra. But the legend in the epic has come to colour the deity in so much eroticism as to bring him down to a position scarcely better than that of an ordinary human.

Introduction of eroticism to the prayer to the Divine does by no means amounts to ascription of voluptuousness either to Him or to the devotee. Another mantra of this sort is one in which the seer prays to Indra to return home after taking Soma since his wife who is auspicious and the beauty of the house may be waiting for him there (Ibid.III.53.6). This is just a figurative way of saying goodbye to the deity which is quite usual in the Vedic tradition of devotion and by no means a reflection on the actual state of things prevailing in the house of Indra, so to say, supposed in the legend to be crowded by heavenly damsels meant particularly for the seduction of seers so that they may not dethrone him.

Vishvamitra, indeed, is a seer of the highest order. He seems to have been born in a royal family, like Siddhartha, the later Buddha but instead of remaining settled in the royal life, he chose to pursue the life of a tapasvin, particularly for the sake of attaining immortality most probably in the same spirit which made Maitreyi, the wife of the Upanishadic sage Yajnavalkya, refuse the share of her husband’s property in the interest of immortality as she has put it:

Can I become immortal by virtue of getting the ownership of even the whole of this earth with all its wealth in plenty? (Brihadaranyaka Upanishad, II.4.2)

The story of Maharishi Saubhari, the master of Rig Veda
Vashishtha: Yogic Sadhana of Vedic Seers – Series 2 of 2
Comment