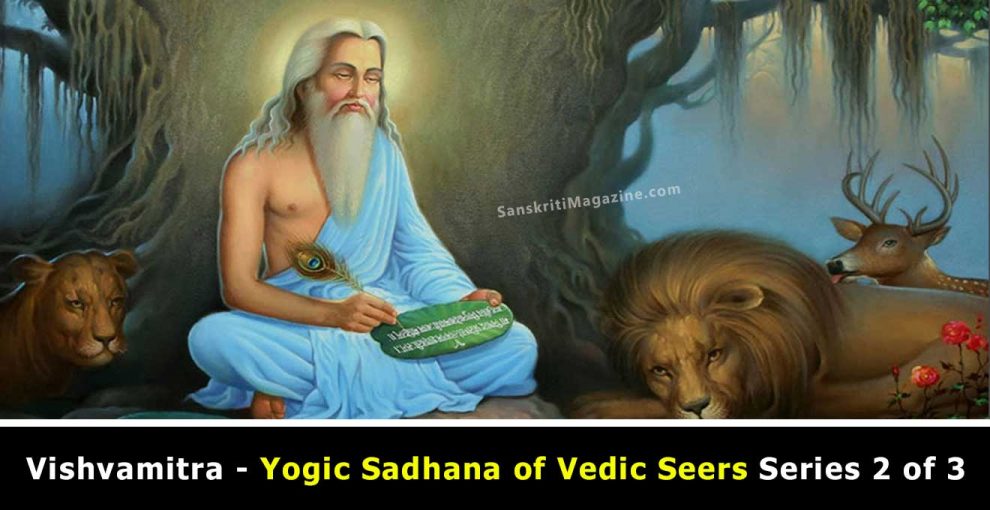 Vishvamitra’s realization of his real identity in the omniscient Agni speaks of his elevation to pure consciousness which is pre-eminently universal and transcendent. That this realization is not a sheer product of his sadhana, which apparently it seems to be, is evident from his remark that he has been right since his birth itself. It means to suggest that he, though an individual, was omniscient inherently and that, therefore, the limitation of individuality along with the consequent ignorance was only a misnomer. 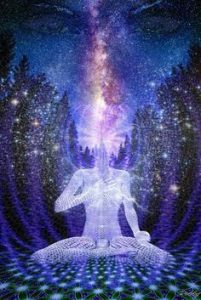 After the realization of his self as the omniscient fire of consciousness, it is but natural for the sadhaka to conceive of the function of his senses as simply the ghrita to burn and rarify his actions. This is what the seers seems to suggest through the characterization of his eyesight as the ghrita to be poured into the fire of consciousness. In our ordinary life the senses are used as carrier of information concerning our surroundings primarily for keeping ourselves sustained in life. Had the individual not been provided with the sense organs, he was sure not to have survived at all. These are, thus, the necessary means to the survival of the individual in life. But when the limitations of individuality get removed resulting in the merger of the individuality into the universal and transcendent consciousness it is but natural for the senses to be used as a means to performance of the yajna of that consciousness lying in its universal creativity.

Accordingly, whatever the individual concerned perceives in the world outside is used primarily not in the self-interest but as the ghrita to keep the fire consciousness constantly burning and serving as consumptive and transformative of the functions of the organs of action. When the sadhaka becomes so much transformed in action, perception and awareness, his mouth becomes the source of words of immortality. This is how the son of Kushika has become Vishvamitra, friendly to the whole of the universe. Only he can become so who has expanded his individuality to universal dimensions through the removal of individualistic constrains from his consciousness.

Further clarification on the course of his sadhana in this respect can be had from the next mantra in the hymn which reads as follows:

By means of three sieves, he purified thoroughly the light in association with the heart for clear understanding if the illumination of thought. Through the use of his inner forces, he created the most versatile centre of attraction and then looked around the heaven and the earth. (Ibid. III.26.8) 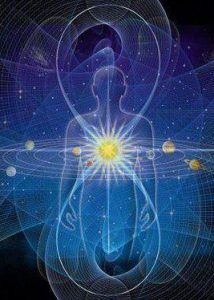 When the seer talks of the association of the heart in the acquisition of the illumination of thought, he obviously cannot but refer to his involvement in the deeper strata of his inner being where ideas work by illumination rather than by logical steps. The act of purifying the light by means of three sieves, therefore, would have to do with something on the deeper psychic plane rather than on the physical by way of purifying squash of Soma by making it pass successively through finer and finer sieves as was usual for the common man during the Vedic age. The Soma under reference is the Soma of consciousness which needs to be passed through the three states of consciousness, namely, that of wakefulness, dream and sound sleep uninterruptedly before it reaches its fourth state called turiya, the fourth.

Until and unless one is able to track the consciousness with full awareness of it through its hide and seek in the states of wakefulness, dream and dreamless sleep, one cannot rise to the level of self-realisation. When attended to with such an uninterrupted awareness during all the three lower states culminating in the entry into the highest one, the otherwise shimmering light of consciousness is realized as the eternally constant reality itself this is what Vishvamitra describes as the Varshistha ratna, the most profound light-shedding gem.

Realization of this supernal consciousness in this way is followed by the seer’s looking around the heaven and the earth. This act of the seer is suggestive of his turning extrovert after the completion of the task of introversion. This has been quite usual with great spiritual sadhakas all over the world. First, they have gone inside themselves forsaking the fascinations of the worldly life and after getting fully established in their spirituality inside they have moved outside for sharing their knowledge and wisdom with people at large. Buddha, Shankara and the like are instances on the point. Vishvamitra looking around the heave and the earth after the vision of the “gem”, amounts to the same turning of him outward for the welfare of the society. This contour of the seer’s life is very much reflected in his sacred Gayatri mantra which reads as follows:

Let us meditate on that supernal light of Savitr so that it may stimulate our inmost being. (Ibid.62.10)

It is important to note that the original mantra as seen by Vishvamitra is short of the vyahritis such as bhuh, bhvah and svah. These vyahritis are added to the basic mantra for the first time in the Yajurveda. This, however, is not to suggest that the original mantra did not require them. On the contrary it is in fulfillment of the mantra’s necessity of them that they happened to be added to it particularly under the circumstances that a slight alteration in a particular Vedic mantra is liable to rob it of its sanctity as a mantra. 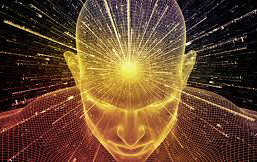 The requirement of the vyahritis is very much evident from the beginning of the mantra with tat, that, referring to the supernal light of Savitr, the Stimulator Supreme. Since He is the stimulator of cosmic dimensions, it is but natural to expect of His Light to stimulate the inner being of the people. But what is going to serve as the staircase so to say to take one to the supernal Savitr? It is in fulfillment of this requirement that the vyahritis are added to the original mantra.

Taken literally, bhuh, bhuvah and svah refer to the earth, the intermediate space and the heaven respectively, beyond which is supposed to lie Savitr. In the psychological sense, on the other hand, they are taken to represent the states of wakefulness, dream and dreamless sleep respectively. Thus, the vyahritis are indicative of the fact that just the light of Savitr in its purest form is accessible to one only after he crosses over the terrestrial, aerial and celestial domains even so the Supernal Light of consciousness can be attained by him only after he is able to take to the string of his individual consciousness and trace it back to its source via the states of wakefulness, dream and dreamless sleep. Elsewhere in the Samhita that domain of Savitr is described as the highest footstep of Vishnu which the seers are said to see constantly as one were to see the sun shining in the sky as the eye of it (Ibid. I.22.20). 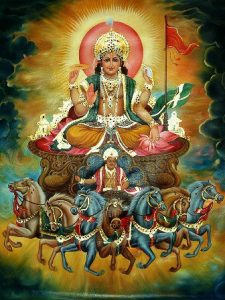 Having called the source of stimulation in the form of the supernal light of the Stimulator Supreme through his tapoyoga amounting to deep meditation practiced at the cost of all bodily comforts, the seer as is evident from the Gayatri mantra tries to impress upon one and all to meditate on the same light and get their inner sense stimulated for right thought and action in life and the consequent well-being of them.

As the ladder of the way to inculcation of the supernal consciousness, Vishvamitra presents before us a role model in the form of an ideal teacher in the next and last mantra of the hymn reading as follows:

May the Heaven and the Earth bring fulfillment to that teacher of truth who acts as such a reservoir of water which remains all the same in spite of hundreds of streams flowing out of it, who serves as an ever vigilant source of words, as unifier with the Reality and experiences the same kind of delight in the midst of the heaven and the earth as does a child lying in the lap of its parents. (Ibid. III.26.9)