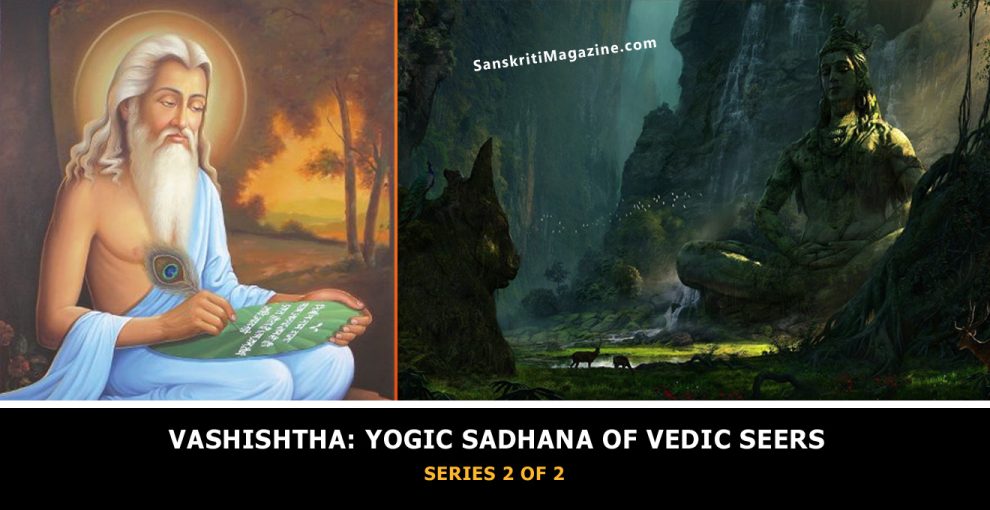 A house of thousand doors cannot but be the state of emancipation. This interpretation has its plausibility in another mantra placed in the close proximity of it in which the seer prays to Varuna not to send him to any house made of clay:

This house obviously is the physical body. As a matter of fact at the time of making this prayer Vashishtha must have been embodied in the physical itself. Even then his prayer that he may not be sent to the clay-house shows that he at that moment was in a spiritual state closer to that of emancipation than to the earthly life.

Herein lies the relevance of the famous maha mrityunjaya mantra as seen by him. The mantra reads as follows:

Let us devote ourselves to Rudra, the tryambaka who is nourishing and good-smelling like the melon fruit so that he may release us from the bondage of death and not from immortality.  – (RV. VII.59.12)

Rudra is Tryambaka because He manifests Himself through three entities, i.e., the heaven, the intermediate space and the earth. His good smell is symbolic of the excellence which is getting manifest via the vital here in life. Devotion to Him as such is expected to release one from the circle of birth and death and thus restore one to one’s original status of immortality. In this way escape from the circle of birth and death is equivalent to getting rid of the clay house while getting restored to immortality amounts to reaching Varuna’s house of a thousand doors.

The seer of magnificent visions like this is said subsequently to have entered into quarrel with another seer of the same stature as Vishvamitra. The reason for the quarrel as started in the Ramayana relates to the ownership of a cow. The story is well-known. According to it, Vishvamitra in the capacity of a king reaches the hermitage of Vashishtha along with his army just incidentally without any prior information. Vashishtha provided the entire army with a ll sorts of amenities including food of various varieties.

Vishvamitra was amazed at these provisions made particularly in the wilderness of the hermitage. He asked Vashishtha about the secret of it. Vashishtha told him that all those provisions were due to his cow, Kamadhenu. The king became greedy of the cow and offered a large number of them in exchange for her. Vashishtha declined to part with her since she served as his mainstay. Vishvamitra became so obsessive to possess her that he asked his army to grab her by force. A fighting ensued and the cow herself produced a large army to fight against Vishvamitra’s. in spite of all his effort, Vishvamitra was defeated. It is on this shocking defeat that he renounced his royalty and took to the path of tapas as is stated in the Ramayana:

Fie upon the force of royalty! Force of Brahmavarchas is supreme. (This is evident from) my entire force having been nullified by the force of spirituality. Having pondered over all this seriously, now I propose to take up to tapas, which is the way to spirituality. (Ramayana I.56.23-24)

It is evident from this statement that the point of difference between Vishvamitra and Vashishtha was not one of difference between two seers but that between a seer and a king. The fault, too, was not committed from the side of the seer but from that of the king. The faulty lay in the king’s misunderstanding about the seer’s cow. He took her as simply as a cow. That is why politely enough he offered one thousand cows in exchange for her which was not an ordinary cow. In fact she was the cow of wisdom which the Veda embodies. She was the cow of the praketa of the hridaya i.e., the wisdom lying in our inmost being and accessible only through contemplation, meditation and tapas. She was the knowledge of the creative will of the Creator.

It is for the sake of this knowledge that the king renounced his kingship and took to the path of tapas and was successful eventually in realizing it as is evident particularly from his formulation of the sacred gayatri mantra. The Savitr of the mantra is symbolic of the Supreme Being particularly as inclined to act the stimulator Supreme. The lustre, bhargas of that Being is his consciousness to which the gayatri stimulates us to devote our own consciousness for its transformation. Vashishtha’s cow may also be taken as the Vak, word, embodying that wisdom which Vishvamitra tried initially to acquire in exchange for his material wealth which his cows represented.

Having failed in this bargain, he made use of his royal force and having failed in that venture also, he took to tapas and succeeded in its acquisition eventually. It is out of that sense of fulfillment that he urges people in general to meditation on the lustre of Savitr so as to get stimulated in their inner being, dhi.

That Vashishtha’s cow proving so alluring to the king was really an embodiment of the higher wisdom can be understood from a mantra seen by him in which he conceives of Indra, the embodiment of supramental consciousness as a cow for milking which he has offered his prayer as follows:

Intending to milk you like a well-fed cow, O Indra, Vashishtha is offering prayers to you. – (RV.VIII.18.4)

This view point finds further confirmation in another mantra seen by Brahman or Atnab and compiled in the Atharvaveda. The mantra reads as follows:

Who may be able to conceive by himself out of the joy of his friendship with Brihaspati the form of the cow which is multi-coloured, abundantly milking, constantly associated with her calf and has been bestowed upon Atharvan by Varuna?

Brihaspati is the divine source of the Vedic knowledge. One living in the friendship of him alone is supposed to conceive of that knowledge as a cow of the above specifications. Such a rare person was Vashishtha as he is said to have received such a cow of supernal wisdom offered to him by the Divine owing particularly to his tapo-yoga.