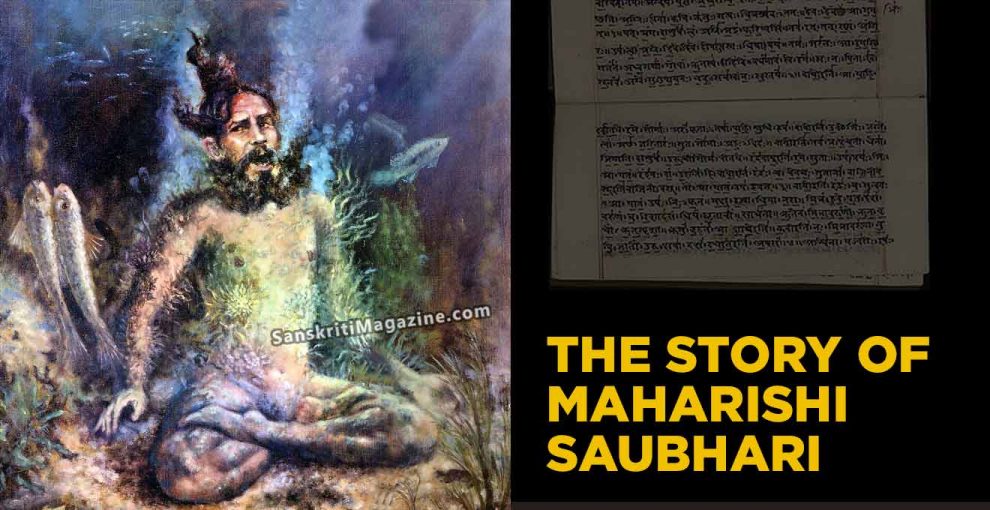 Emperor Maandhata ruled with his capital at Ayodhya with his wife Indumathi and thier three sons, Purukutsa, Ambarisha and Naabhaga and fifty daughters. During that time there was a great sage called Soubhari, who was a master of Rig Veda.

The legend says that he did penance for twelve years under water and there was a large fish living close to him in water. That fish was constantly making merry in the company of its wife and children in front of the Maharishi. Maharishi saw this and his mind was distracted from penance. He started to think: “This fish, though living in water, is very lucky. It is very happy in the uninterrupted company of its family. Householder’s life is indeed very pleasant; this life of austerity of mine is very painful.” He now wished to marry and enjoy the pleasures of householder. He came out of the waters and went to King Maandhata. The king welcomed, honoured and enquired of the welfare of the sage.

The sage said: “O King, I desire to marry. I seek a girl from you. You have fifty daughters; give me one of them.” On hearing this, the king was shocked. Looking at the very old sage and his desire, the king hung his head, wondering what to do. The sage said: “What are you thinking over? What have I said, which is unbecoming?” The king, thinking as to how to give his daughter to this very old man and also of the possibility of the sage cursing him if he denied his plea, said: “O sage, it is the custom in our family to give the daughter in marriage only to the one, whom she desires and chooses. You please come to my inner apartments. All my fifty daughters are there. I shall give in marriage to you any of them, who wishes to marry you.”

The king thought that the sage being extremely old, his daughters would not like him; on coming to know that the girls do not like to marry him, the sage would go away quietly. But the sage, being able to read the king’s thoughts, said to him: “O king, I shall not violate the custom in your family. If the girl likes me, I shall marry her; if not, I shall drop this effort.” The king now ordered his servant to take the sage to the inner apartments. As the sage moved towards the inner apartments, he took a very handsome, young form.

The servant reached him inside. He told the girls: “This sage sought a girl from your father, the king in order to marry. The order of your father, the king is that any of you, who likes and chooses the sage, will be married off to him.” All the fifty girls, mesmerised by the handsomeness of the sage, firmly desired to marry him. The servant informed the king of this. The king, though unwilling, was concerned about having given word to Maharishi Saubhari and gave all his fifty daughters away to the sage.

The sage reached his Asrama with his wives. He called Visvakarma and ordered him to erect fifty luxurious mansions, equipped with all objects of pleasure. A Nidhi (treasure) named Nandanam stayed always in those mansions. The sage took fifty forms through his yogic power and enjoyed conjugal pleasures with his fifty wives. Thus passed many years. Many sons and grandsons were born to him. The family was expanding. Desire and worry also kept on increasing. The sage’s mind was immersed in family worries.

One day the sage started to think: “Oh, Who can know the power of Maya! One who is immersed in desire will never develop any liking for spirituality. Though I have done severe penance for a long time while under water, I could not control my mind! Just by being in the company of a fish, I lost the power of my austerities. Marrying and looking after one wife is the cause of sorrow for a man; I married fifty wives. My woes multiplied many times. This became an obstacle for my austerity. Was it not the association with the fish that led to all this sorrow?” The sage repented much and developed detachment with his wives. He went to the forest and engaged in penance. In due course he was divested of all attachment, he took sanyasa and ultimately reached the Supreme State.