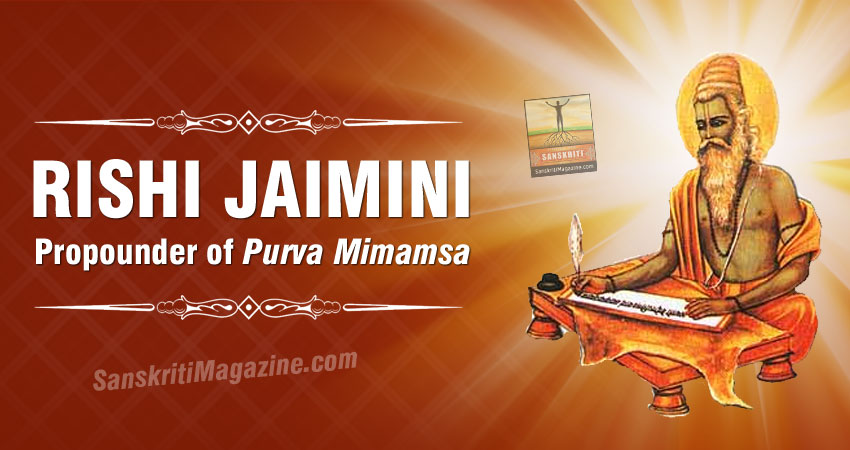 Jaimini Rishi is the propounder of Purva Mimamsa, one of the six astik Darshans.

Jaimini was born in the Kautsa family and was a Rutvij priest during Yudhishthir’s Ashwamedh Yagna. He was present with other seers while Bhishma lay on the bed of arrows. He also performed the Snake Yagna for Janmejay. Finally the Saamvidhan Brahman cites him as a pupil of Vyas, who imparted to him the Sam Veda. He was also a pupil of Langli.

He was also the guru of Panini (c. 1600 BCE), who systematized Sanskrit grammer. Jaimini’s son was Sumantu.

From the foregoing information it can be seen that an uncertainty exists about Jaimini’s period and exact identity. One uncertainty concerns the identity of Vyas. For a rishi named Vyas also appears as Jaimini’s fourth descendant:

Is this Baadarayan Vyas the author of the Mahabharat and the Vedanta Sutras (Brahma Sutras)? The enigma is compounded by the fact that Jaimin and Badarayan cite each other’s references in their sutras. So it is difficult to fathom who existed first! Hence, scholars are divided about Jaimini’s period. One scholar places him 100 years after the Mahabharat probably due to his presence before Bhishma and in Yudhishthir’s Yagna mentioned earlier. Other scholars assign him a period of around 500 BCE based on the greater affinity of the Mimansasutras to the Kalpasutras.

The only other detail about Jaimini’s ‘life’ is about his death, which was caused by a wild elephant!

Now we will consider his life’s work, the Mimansasutras, which is the first systematic treatise on Mimamsa.

Opinions vary about the exact number of Mimansasutras, ranging from 2500 to 3000; in twelve to seventeen chapters. A thoughsand topics have been discussed in these sutras. Through these sutras, Jaimini discussed the real meaning of the Vedas.

The first sutra says: Athāto Dharmajignāsā after this begins the desire for knowing dharma. From this, his sutras are also known as Dharmamimansa. He defines dharma as an act or set of actions enjoined by the Vedas which is simultaneously conductive to human well–being (Mimamsasutras 1.1.2). This Darshan deals primarily with yagnas rites and rituals enjoined by the Vedas. Mimamsa attaches greater importance to the ordained acts of the yagnas than to the deities to whom they are offered. Mimamsa considers the Vedas as entirely authoritative and apaurasheya – not written by any human agent. Mimamsa does not postulate Paramatma as the author of the Vedas, for they are self-revealed, self-valid and eternal.

The purpose of comparison in Nyaya, using the analogy of the go (cow) to gavaya (wild ox or nilgai) was to reveal the denotation of a word. However, for the mimamsak, the purpose is to glean the similarity between two objects. Therefore, the urbanite who entered the forest and saw the gavaya remembered what the forest dweller had told him; that the gavaya is similar to the go. From this he concluded that the go is similar to the gavaya.

In the early stages, Mimamsa considered swarg (heaven) as man’s ultimate aim for which Vedic yagnas were to be performed. However, the later mimansaks upheld moksha as the final human goal. Similarly, Jaimini, as well as Shabar and Kumaril, his commentators, remain mute about the existence of the omniscient, omnipotent and all merciful Parmatma.

However, later exponents such as Kahndadev and Gagabhatt have discussed this, averring that Purva Mimamsa has nothing new to add about Parmatma and moksha, to what has been thoroughly discussed in Uttar Mimamsa. Moreover, it is not Mimams’s aim to deny Paramatma’s existence but to explain the truth about Vedic rites and rituals.

Finally, the Principle of interpretation formulated by Jaimini in the mamnsasutras are absolutely necessary for the accurate understanding of any Dharmashastra. Just as grammer is necessary in understanding language and literature, so is semantics. Jaimini’s sutras fulfill this requirement.

This Darshan’s important philosophical contribution lies in its Gnanmimamsa. Its belief in the six pramāns is also accepted by Vedant. Its greatest contribution is that it relentlessly countered the tremendous castigation of the Vedas by nastiks, namely, Charvak, Jain and Buddha schools of thought. Towards this end Kumaril Bhatt’s commentaries and efforts were the most successful and laudable. These saved the Vedas and the veracity of Vedic rites – Karmakand. Though Samkhya-Yog and Nyaya-Vaisheshik are considered astik Darshans, they have almost negligibly depended on the Vedic shrutis; wholly depending on their own texts to propound their thoughts. The composition of the Mimamsasutras is firmly based on the Vedas. Additionally, the expositions and commentaries of the sutras to establish the veracity and validity of their school of thought are also based on the Vedic Shrutis.

Hence, among the astiks, who believe in the validity of the Vedas, Mimamsa’s contribution is greater and more important than the previous four Darshans, Mimamsa has also deeply reflected and examined the Law of Karma – karma, karma’s form, types of karmas and the intrinsic relation between karma and its fruit, etc. – and Karmashastra, yagna, yagna rites and their stipulated rituals and implementation.

Dadhichi: The Sage who sacrificed his life to protect the Devas
Maharishi Kapila: The Perfect Being
Comment