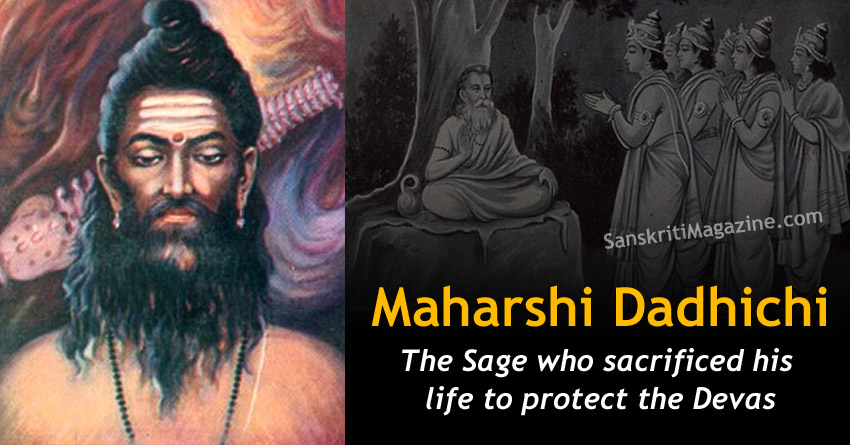 Dadhichi, also known as Dadhyancha, is an important character in Hinduism. He is revered amongst the greatest of sages and is portrayed as an example that no sacrifice is too great when the result is the good of the world.

Dadhichi is corrupt form of dadhyanch/dadhyang, and it is derived from “dhadhya” means curd in Sanskrit as pointed out by great Sanskrit scholar Panini himself. Dhadya+ang means body takes strength from curd. He was among one of the greatest among clan of bhrigus. He is credited with giving up his life in order to allow the Devas to use his bones to make weapons to defeat the Asura Vritra.

Dadhichi was the son of Atharvan, a rishi and his wife Chitti (Bhaagvat Puraan, 4/1), who was the son of Brahma. Chitti was Sage Kardam’s daughter. His wife’s name was Swarcha and his son was Pippalada, a great sage himself, who is supposed to be associated with the Pippalada school of thought and associated with the origin of the Praśna Upanishad. He had established his ashram in Misrikh, Namishyaranya near Lucknow, in the state of Uttar Pradesh, India.  Namishyaranya and his ashram have been cited in all of the puranas, where it is still in existence. His name is seen to occur in the 1st mandala of Rigveda, Bhagavata Purana, Srimad Devi Bhagavatam and in the Puranas). He is said to be the forefather of many other great rishis and various clans, such as the Dadhich in India claim to be his descendants.
Dadhichi is believed to have authored the famous composition of “Narayanm Kawacham” , which is quite popular in Southern India and is a hymn for power & peace. His bones are marked as symbol on the India’s highest gallant award “Parm Vir Chakra” as “Vajra”.

Dadhichi is associated with many Hindu legends and is sometimes portrayed as having a horse’s head.

Dadhichi was said to be a master of a Vedic art known as Brahmavidya (Madhuvidya) that would enable mortals to attain immortality. Indra felt his position was insecure with such power in the hands of a mortal man, especially one with as much power as Dadhichi possessed by virtue of being a rishi. Indra was also against Ashwini Kumars, learning Brahmavidya and swore that he would behead the one who taught them the art. However, the Ashwini twins wished to learn this art and devised a plan to protect Dadhichi from Indra’s power. They learnt the art from Dadhichi, cut off and preserved his head and while replacing it with the one from a horse.

Indra in his wrath beheaded the horse-headed sage and left. The Ashwini twins then put Dadhichi’s head back and revived him with the Madhuvidya that he had taught them. This was how the sage came to be called Ashvashira – The One with the Horse’s head.

Indra was once driven out of Devaloka by an Asura named Vritra. The asura was the recipient of a boon whereby he could not be killed by any weapon that was known till the date of his receiving the boon and additionally that no weapon made of wood or metal could harm him.

Indra, who had lost all hope of recovering his kingdom was said to have approached Shiva who could not help him. Indra along with Shiva and Brahma went to seek the aid of Vishnu. Vishnu revealed to Indra that only the weapon made from the bones of  Sage Dadhichi would defeat Vritra.

Indra and the other Devas approached the Sage, whom Indra had once beheaded, and asked him for his aid in defeating Vritra. Dadhichi acceded to the devas’ request but said that he wished that he had time to go on a pilgrimage to all the holy rivers before he gave up his life for them. Indra then brought together all the waters of the holy rivers to Naimisharanya, thereby allowing the sage to have his wish fulfilled without any further loss of time.

Dadhichi is then said to have given up his life by the art of Yoga after which the Devas fashioned the Vajrayudha from his spine. This weapon was then used to defeat the asura, allowing Indra to reclaim his place as the King of Devaloka.

In another version of the story, Dadhichi was asked to safeguard the weapons of the Devas in order to protect them from being stolen by the asuras.  When no one came to reclaim these weapons, Dadhichi, tiring of his task, dissolved them in sacred water and drank them.  The Devas returned for their weapons in order to finally defeat Vritra whereupon Dadhichi informed them of what he had done with them and that their weapons were part of his bones now.

Seeing no other alternative, Dadhichi willingly gave up his life so that Brahma could fashion weapons to defeat the asuras from his bones including the Vajrayudha which was used to kill Vritra.

Dadhichi is said to have been the first to leave from Daksha’s yagna when he realised that Shiva had not been invited in spite.  The mantra or incantation for Devi Hinglaj is attributed to him.

As he gave up both his life and his body, Dadhichi is considered to be epitome of sacrifice and selfless attitude.