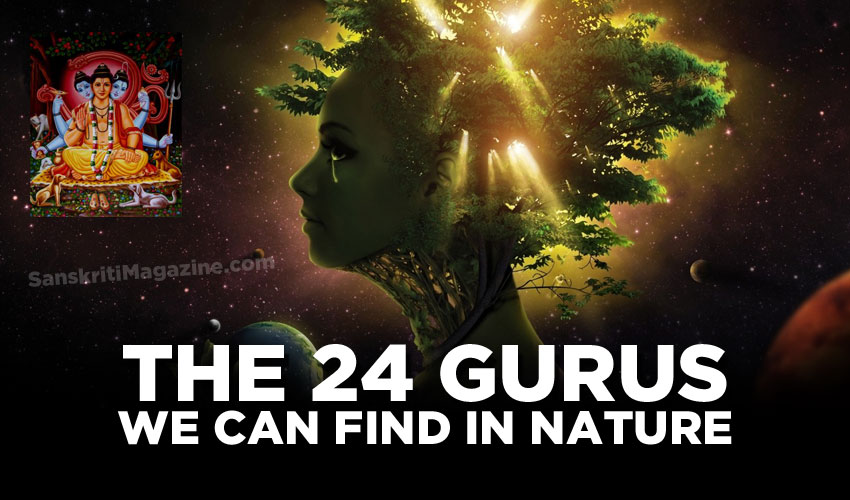 Examples from the 11th Canto of Srimad Bhagavatam.

The 24 gurus are: the earth, air, sky, water, fire, moon, sun, pigeon and python; the sea, moth, honeybee, elephant and honey thief; the deer, the fish, the prostitute Pingala, the kurara bird and the child; and the young girl, arrow maker, serpent, spider and wasp. (SB 11.7.33-35)

1. Earth: a sober person should never be distracted from progress on his won path even if he is harassed by other living beings, because they are acting helplessly under the control of God. He should be as steady as the earth. Like the mountain and the tree, he should dedicate himself to the service of others.

2. Air: a transcendentalist may be surrounded by innumerable material objects possessing good and bad qualities. But like the wind he should never be entangled by them. When the wind carries different aromas, it never mixes with them.

3. Sky: Though the sky extends everywhere and everything rests within it, it does not mix with anything. The soul and Supersoul have the same quality. The sky is never implicated or affected by the blowing action of the wind. In the same way the living entity is never affected though it may enter a body of material elements.

4. Water: The saintly person is like water because he is free from all contamination, gentle by nature and when speaking, creates a beautiful vibration like the flowing of water. By seeing, touching or hearing such a saintly person, the living entity is cleansed as if coming in contact with pure water.

5. Fire: Even if a saintly person eats contaminated food by chance he is not affected, like the fire that burns up contaminated substances that are offered to it. Like fire, he is sometimes concealed and sometimes revealed. As the spiritual master he burns up the past and future reactions of his disciples. The Supreme Soul is like fire in that He enters different bodies, as fire manifests differently in various pieces of wood. Like the flickering fire, the waves of time flow constantly and imperceptibly, bringing with them birth, growth and death. But just as nobody can follow the changing pattern of a flame, no-one can see the changes wrought by time upon them.

6. Moon: Though the moon waxes and wanes, it is not affected my this “change.” Similarly the living entity is not affected by the changes of the body from birth to death.

7. Sun: A saintly person can accept a material thing with his senses and at the appropriate time he gives that thing to the proper person. So also the sun evaporates water and returns it to earth as rain. Sun and saint are never entangled by this. The sun is reflected in many objects but is never divided. Also the soul is reflected into various bodies but is always one and the same.

8. Pigeon: he is an example for excessive attachment, because he chose to be captured by the hunter after seeing his wife and children so captured, thinking that without them life was not worth living. 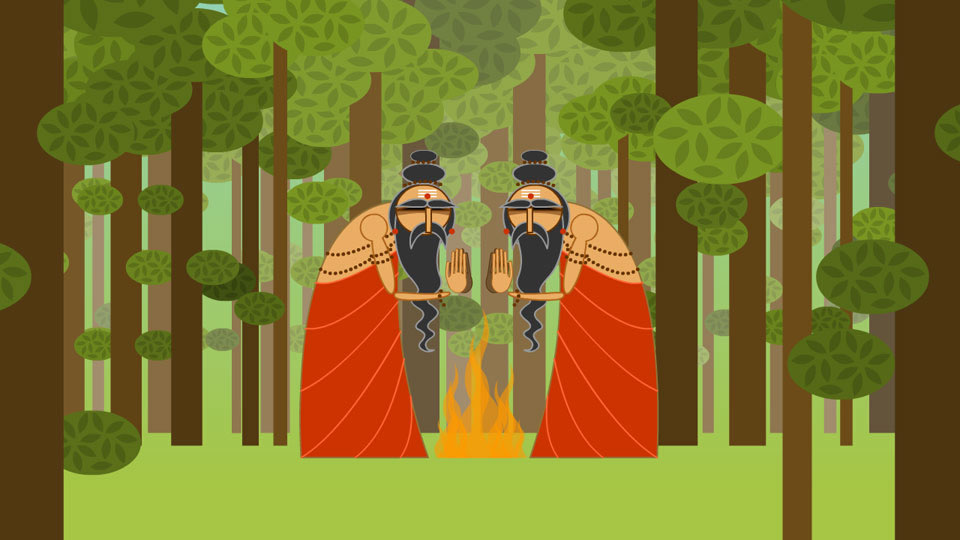 9. Python: he does not make arrangements for food, but waits for food to come to him. This exemplifies peacefulness and patience.

10. The sea: just like a tranquil sea, the saintly person, being full of knowledge, is never disturbed.

12. The honeybee: a renounced person who begs a little food from different houses is like a madhukari, or honeybee. Also a honeybee takes nectar from different flowers. So also an intelligent human being takes the essence of different scriptures. But a saintly person should not become greedy and collect too much.

13. The elephant: A saintly person should remember how the great bull elephant is captured by the she-elephant; therefore he should never desire to touch the body of a young girl.

14. The honey thief: sannyasis and brahmacaris are entitled to take away the wealth of the laboring householders, just like a honey thief takes away the honey from the nest of the busy bees.

15. The deer: they are bewildered by the sound of a hunter’s horn, and thus are killed. A renounced person should never become attracted by mundane sounds like sensuous music, especially the sweet singing and dancing of beautiful women.

16. The fish: they are caught on the hook by their uncontrollable tongues. A learned man should control all his senses by first controlling the tongue, which is the most powerful sense of all.

17. Pingala: this prostitute gave up her plans for earning money through sex indulgence out of frustration. Feeling satisfaction from her abandonment of material desires, she could remember Krsna and became peaceful.

18. The kurara bird (hawk): When a hawk carrying some meat was attacked by larger hawks, he gave it up out of fear for his life. Renouncing and saving himself, he felt more happiness than he did when he took the meat.

20. The young girl: receiving some prospective bridegrooms on a day when her parents were away from home, she went into the kitchen to prepare food for them. While beating rice, her bracelets jangled, and she was afraid that the young men would think her family was poor because she was doing all the work in the home. She broke all the bracelets except two on each arm, but these also jangled. She then removed one from each arm, leaving only one on each arm. Thereafter she worked in silence. So too, when many people live together, there will be clashing of interests and fighting. It is better to live alone.

22. The snake: he makes no home for himself, but takes over the homes of others, having eaten them. A sage should similarly make no endeavors for his own shelter.

23. The spider: God is like the spider because He creates the network of the cosmos from his own potency and then withdraws it into Himself.

24. The wasp: he trapped a weaker insect in his hive. This insect took on the mentality of a wasp out of intense fear of the wasp, and thus became a wasp in its next life. This illustrates how one attains in the next life what one’s mind is fixed upon.

Maharishi Kapila: The Perfect Being
Sage Yajnavalkya of Mithila
Comment