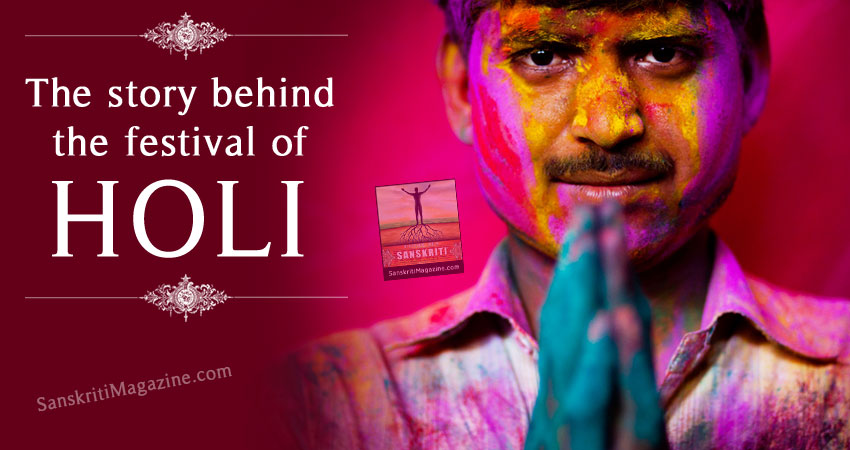 How Holi Got Its Name

In days of yore, there were communities of cannibals in India. They caused much havoc. They threatened the lives of many innocent people. One of them was Holika. She took immense delight in devouring children. Sri Krishna destroyed her and thus saved the little children. Even today, the effigy or figure of Holika is burnt in the fire. This is the origin of the great festival of Holi.

Why Holi is Celebrated in Spring 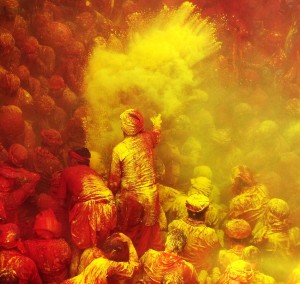 It begins about ten days before the full moon of the month Phalgun (February-March), but is usually only observed for the last three or four days, terminating with the full moon. This is the spring festival of the Hindus. In the spring season all the trees are filled with sweet-smelling flowers. They all proclaim the glory and everlasting beauty of God. They inspire you with hope, joy and a new life, and stir you on to find out the creator and the inner dweller, who is hiding Himself in these forms.

On the festival day, people clean their homes, remove all dirty articles from around the house and burn them. Disease-breeding bacteria are thereby destroyed. The sanitary condition of the locality is improved. On the last day of Holi, people take a little fire from this bonfire to their homes. They believe that their homes will be rendered pure, and their bodies free from disease.

The Legend of Holika

According to Bhagavat purana, there was a king named Hiranyakashipu who, like a lot of demons and Asuras, had the intense desire to be immortal. To fulfill this desire he performed the required Tapas (penance) until he was granted a boon by Brahma. Since the God’s do not usually grant the boon of immortality, he used his guile and cunning to get a boon which he thought made him immortal. The boon gave Hiranyakashyapu five special powers: he could be killed by neither a human being nor an animal, neither indoors nor outdoors, neither at day nor at night, neither by astra (weapons that are launched) nor by any shastra (weapons that are hand held), and neither on land nor in water or air. As this wish was granted, Hiranyakashyapu felt he was invincible, which made him arrogant. Hiranyakashyapu decreed that only he be worshiped as a God, punished and killed anyone who did not accept his orders. His son Prahlad disagreed with his father, and refused to worship his father as a god. He continued believing and worshipping Lord Vishnu.

For many traditions in Hinduism, Holi celebrates the death of Holika in order to save Prahlad and we see where Holi gets its name. The night before Holi pyres are burnt in North India in keeping with this tradition. It should also be noted that in some parts of India the day is actually called Holika[citation needed]. There are other activities associated with the story of Prahlad, but the burning of Holika is the one that we can most directly associate with Holi. Fire burnt on the eve of Holi (Holika Dahan) symbolizes the burning of Holika. The story as a whole is testament to the power of devotion (bhakta) over the evil represented by King Hiranyakashyapu, as Prahlad never lost his faith.

The burning of Holika is the most common mythological explanation for the celebration of Holi. In different parts of India varying reasons are given for Holika’s death. Among those are:

In North India, people play joyfully with colored water. The uncle sprinkles coloured water on his nephew. The niece applies coloured powder on her aunt’s face. Brothers and sisters and cousins play with one another.

Huge bundles of wood are gathered and burnt at night, and everywhere one hears shouts of “Holi-hai!” or “Holi-ho!” People stand in the streets and sprinkle coloured water on any man who passes by, be he a rich man or an officer. There is no restriction on this day. People compose and sing special Holi songs.

During the festival, people dance about in the streets. People play practical jokes with passers-by. A bonfire is lit towards the conclusion of the festival. Games representing the frolics of the young Krishna take place joyously around a fire. 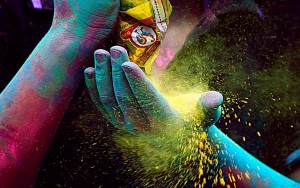 How to Celebrate Holi in its Truest Spirit

Festivals like Holi have their own spiritual value. Apart from the various amusements, they create faith in God if properly observed. Hindu festivals always have a spiritual significance. They wean man away from sensual pleasures and take him gradually to the spiritual path and divine communion. People perform havan and offer to the gods the new grains that are harvested.

On such holy occasions there should be worship of God, Satsangs, and Kirtan of the Lord’s Names, not merely the sprinkling of colored water and lighting of bonfires. These functions are to be considered most sacred and spent in devotional prayers, visiting holy places, bathing in sacred waters, and Satsang with great souls. Abundant charity should be done to the poor. Then only can Holi be said to have been properly celebrated. Devotees of the Lord should remember His delightful pastimes on such happy occasions.

Why Krishna is Worshiped on Holi

The religious element in the Holi festival consists of worship of Sri Krishna. In some places it is also called the Dol Yatra. The word dol literally means “a swing”. An image of Sri Krishna as a babe is placed in a little swing-cradle and decorated with flowers and painted with coloured powders. The pure, innocent frolics of little Krishna with the merry milkmaids—the Gopis of Brindavan—are commemorated. Devotees chant the Name of Sri Krishna and sing Holi-songs relating to the frolics of little Krishna with the Gopis. 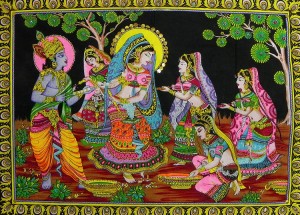 Holi’s Roli in Refreshing Our Lives

All great Hindu festivals have religious, social and hygienic elements in them. Holi is no exception. Every season has a festival of its own. Holi is the great spring festival of India. Being an agricultural country, India’s two big festivals come during the harvest time when the barns and granaries of our farmers are full and they have reason to enjoy the fruits of their hard labour. The harvest season is a festive season all over the world.

Man wants relaxation and change after hard work. He needs to be cheered when he is depressed on account of work and anxieties. Festivals like Holi supply him with the real food and tonic to restore his cheer and peace of mind.

A Festival that Unites Us All

The social element during Holi is the uniting or “embracing” of the great and the small, of the rich and the poor. It is also the uniting of equals. The festival teaches us to “let the dead bury the dead”. We should forget the outgoing year’s ill-feelings and begin the new year with feelings of love, sympathy, co-operation and equality with all. We should try to feel this oneness or unity with the Self also.

The Real Spirit of Holi

Holi also means “sacrifice”. Burn all the impurities of the mind, such as egoism, vanity and lust, through the fire of devotion and knowledge. Ignite cosmic love, mercy, generosity, selflessness, truthfulness and purity through the fire of Yogic practice. This is the real spirit of Holi. Rise from the mire of stupidity and absurdity and dive deep into the ocean of divinity.

Refrain from Nefarious Activities During Holi

Nowadays, people are found indulging in all sorts of vices in the name of the Holi festival. Some drink intoxicating liquor like toddy and fall unconscious on the roads. They indulge in obscene speech as a result of drinking. They lose respect for their elders and masters. They waste their money in drink and dice-play. These evils should be totally eradicated.

The call of Holi is to always keep ablaze the light of God-love shining in your heart. Inner illumination is the real Holi. The spring season is the manifestation of the Lord, according to the Bhagavad Gita. Holi is said there to be His heart.

~ Based on the teachings of Swami Sivananda in “Hindu Fasts and Festivals” published by the Divine Life Society.

Let’s have a Green Diwali

The Spiritual Significance of Diwali