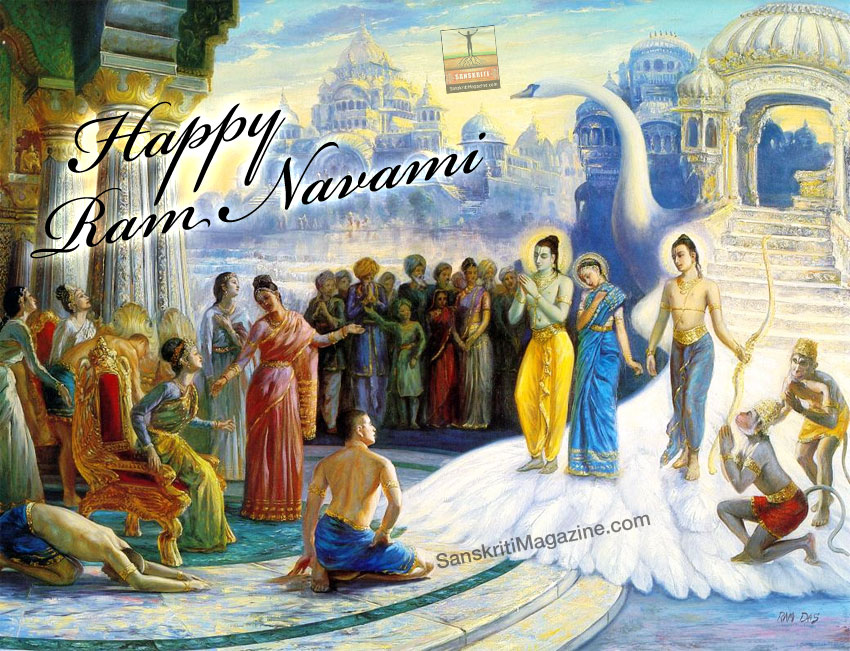 Ram Navami, a Hindu festival celebrating the birth of the Bhagwan Rama is today. As per the Hindu calendar, it falls on the Shukla Paksha of the Navami – the ninth day of Chaitra month. This Chaitra Masa Shuklapaksha Navami also marks the end of nine-day Chaitra Navratri.

Ram Navami is one of the Major festivals of the country and is observed as a holiday in many places. It is mainly a Hindu festival and is celebrated in memory of Lord Rama and his marriage with Sita. Ram Navami marks the birth of the Lord to the king of Ayodhya Dasarath and his wife Queen Kaushalya. The festival is celebrated with pomp and rejoicings all over the country on the ninth day of the month of Chaitra according to the hindu lunar calendar. Lord Rama is worshipped as the seventh incarnation of Lord Vishnu and there are various rituals and ceremonies performed during the occasion in honor of the great Lord.

The occasion of Ram Navami owes its origin to a number of legends of the epic of Ramayana. It says that Dasarath who was the king of Ayodhya had three wives Kausalya, Sumitra and Kaikeyi. But the only problem was that they had no children. After many offerings and ceremonies at last he had four sons. Rama was the son of Kaushalya and is regarded as the seventh incarnation of Lord Vishnu. It is said that the great Lord Vishnu takes birth in this world whenever there is Adharma over Dharma. The festival is celebrated to commemorate the birth of Lord Rama and it also reminds us of the Marriage of Lord Rama with Sita.

During the festival people throng themselves at the temples at other places of worship and make their offerings to the great Lord. During the festival, many people perform the ritual of Kalyanotsavam which symbolizes the marriage of Rama and Sita. Other important parts of the ceremony include Panakam and the procession which is a most integral part of the occasion. The festival is also marked by fasting and other several rituals. Different rituals are performed in different part of the country according to the local cultures and traditions but however the central idea remains the same.

People decorate their houses and streets are decorated during the processions to mark the zeal and pomp of the ceremony. Thus to conclude it can be said that Ram Navami is one of the festivals of the nation that not only symbolizes the cultural heritage but also depict the integration and unity of the nation.

Rama Navami is a very significant day and it is observed throughout India.

Ayodhya is the most significant place to celebrate the birth anniversary of Lord Rama. It is considered highly auspicious to take bath in sacred river Sarayu on Rama Navami. Thousands of devotees take a holy dip in the river of Sarayu before they visit famous Kanak Bhawan temple in Ayodhya. Being the birthplace of Lord Rama, Ayodhya during Rama Navami is similar to what Mathura is during Krishna Janmashtami.

Bhadrachalam Temple in Telangana is dedicated to Lord Rama and Goddess Sita. The wedding anniversary of Lord Rama and His consort Sita is celebrated each year with much fanfare on the auspicious day of Rama Navami. The event is popularly known as Shri Ramanavami Kalyanam Utsava.

In South India, especially in Tamil Nadu, devotees of Lord Rama perform Kalyanotsavam. During Kalyanotsavam, the symbolic marriage ceremony of Lord Rama and Goddess Sita is conducted and deities are taken to the streets through a ceremonial procession.