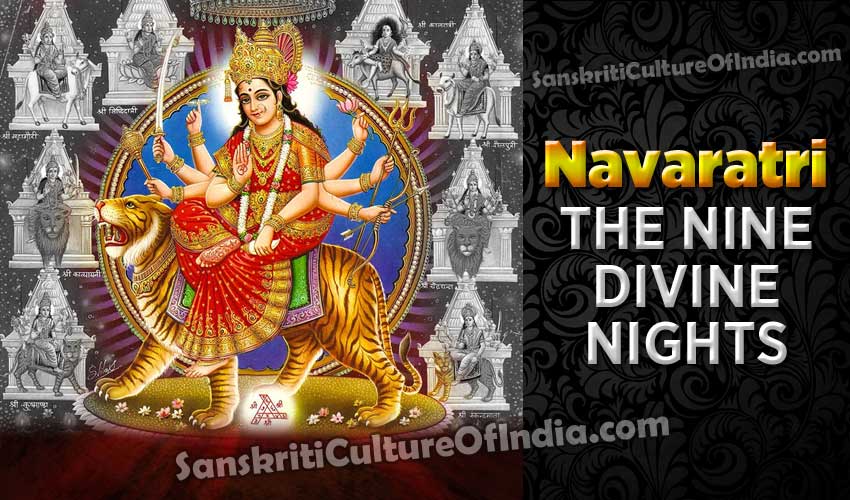 “Nava-ratri” literally means “nine nights.” Navaratri usually happens in late September/early October each year. The dates of the festival are determined according to the lunar calendar. It’s usually a nine night festival that ends with Dussehra, the victory of good over evil, on the tenth day. However, some years it’s reduced to eight nights or extended to 10 nights. This is because, astrologically, some of the days occur on the same date or occur across two dates.

Note that in south India, Goddess Durga is worshiped during the first three days of the Navaratri festival, followed by Goddess Lakshmi during the next three days, and finally Goddess Saraswati on the last three days.

What’s the Significance of Navratri?

During Navaratri, we invoke the energy aspect of God in the form of the universal mother, commonly referred to as “Durga,” which literally means the remover of miseries of life. She is also referred to as “Devi” (goddess) or “Shakti” (energy or power). It is this energy, which helps God to proceed with the work of creation, preservation and destruction. In other words, you can say that God is motionless, absolutely changeless, and the Divine Mother Durga, does everything. Truly speaking, our worship of Shakti re-confirms the scientific theory that energy is imperishable. It cannot be created or destroyed. It is always there.

Why Worship the Mother Goddess?

We think this energy is only a form of the Divine Mother, who is the mother of all, and all of us are her children. “Why mother; why not father?”, you may ask. Let me just say that we believe that God’s glory, his cosmic energy, his greatness and supremacy can best be depicted as the motherhood aspect of God. Just as a child finds all these qualities in his or her mother, similarly, all of us look upon God as mother. In fact, Hinduism is the only religion in the world, which gives so much importance to the mother aspect of God because we believe that mother is the creative aspect of the absolute.

Why Twice a Year?

Every year the beginning of summer and the beginning of winter are two very important junctures of climatic change and solar influence. These two junctions have been chosen as the sacred opportunities for the worship of the divine power because:

Navaratri is divided into sets of three days to adore different aspects of the supreme goddess. On the first three days, the Mother is invoked as powerful force called Durga in order to destroy all our impurities, vices and defects. The next three days, the Mother is adored as a giver of spiritual wealth, Lakshmi, who is considered to have the power of bestowing on her devotees the inexhaustible wealth. The final set of three days is spent in worshipping the mother as the goddess of wisdom, Saraswati. In order have all-round success in life, we need the blessings of all three aspects of the divine mother; hence, the worship for nine nights.

Why Do You Need the Power?

Thus, I suggest you join your parents in worshipping “Ma Durga” during the Navaratri. She will bestow on you wealth, auspiciousness, prosperity, knowledge, and other potent powers to cross every hurdle of life. Remember, everyone in this world worships power, i.e., Durga, because there is no one who does not love and long for power in some form or the other.

The story behind the festival of Holi