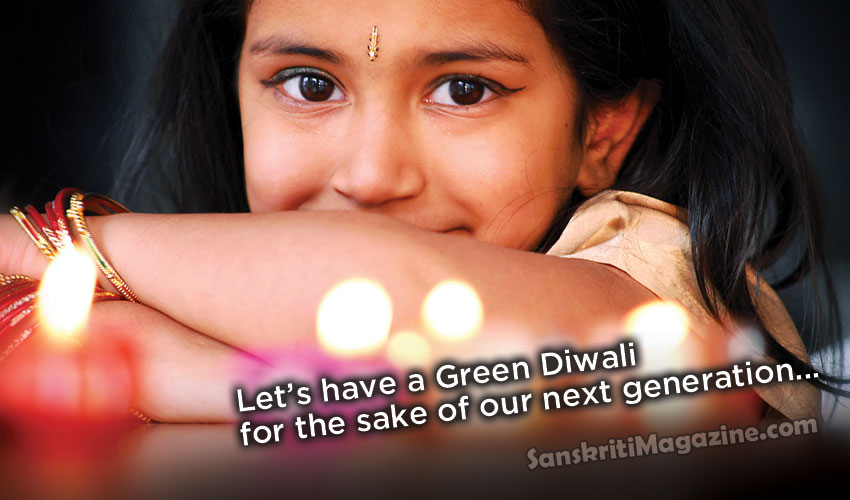 With the Festival of Lights round the corner there is promise of fun and laughter. But in the midst of all that, do keep in mind the fragile state of the earth and also those less privileged than yourself. Traditionally, Diwali was celebrated by lighting earthen lamps signifying the triumph of good over evil.

The very mention of Diwali fills our mind with images of a night sky colourfully lit, an equally colourful variety of sweets and new clothes.

Be it marking the return of Lord Rama from a 14-year exile in the forest after defeating Ravana, or cheering the killing of the demon Narkasura by Krishna, everybody’s favourite ‘Festival of Lights’ has grown beyond its purpose to become a time for getting together with loved ones and celebrating happiness.

Did you know that diyas lit on the moonless Diwali night signifies the end of darkness of ignorance and the beginning of light that enlightens all? Well, this Diwali enlighten yourself towards the hazards that boisterous celebrations of Diwali poses to our environment.

This articles endeavors to sensitize the readers towards celebrating an environmentally safe Diwali by pointing out the major impacts that Diwali has on our environment. It is hoped that this articles will encourage you to celebrate a green Diwali, where there will be an explosion of joy without crackers!

How to celebrate an Eco Sensitive Diwali?

Now, that you are interested in celebrating an Eco – Sensitive Diwali, the first thing that you need to do is to make yourself aware about the effects the traditional Diwali celebrations has on the Mother Nature.

Given below are three major environmental impacts that Diwali Festival have on our environment.

1. Air Pollution through Firecrackers – “Say ‘No’ to Fire crackers and ‘Yes’ to life!”

For most people lighting of firecrackers is the highlight of Diwali. Brighter the sparkles, louder the noise the greater the thrill!! In fact to many of us, these aesthetic forms of light seem so appropriate and most essential when celebrating the ‘Festival of Lights’.

But little do people realize that in our increasingly populated and polluted cities, the temporary joy of watching the firecrackers is soon replaced by the intense air pollution caused by these. The toxic substances used in the firecrackers release toxic gases that are harmful to the health of all living beings. The high level of noise generated by the crackers cause immense suffering to birds and animals. Besides, Diwali crackers are dreaded by the sick and the ailing.

Sadly, few of us realise that the firecrackers used on Diwali are mostly made by very young children. Since the substances being handled are extremely toxic many of these child labourers get sick and die in their early teenage years.

Let’s do a little analysis of crackers and list out in actual terms the harmful effects posed by each of its chemicals.

Chemical Impact
Copper: Irritation of respiratory tract
Cadmium: Anemia and damage to kidney
Lead: Affects the nervous system
Magnesium: Its dust and fumes cause metal fume fever
Sodium: Reacts violently with moisture and can attack the skin.
Zinc: Leads to vomiting
Nitrate: Could lead to mental impairment
Nitrite: Could lead to coma

Noise Pollution caused by Fire Crackers
Crackers that make a noise of more than 125 decibels at four metres distance from the point of bursting are banned by the law. Given here are the hazards posed by excessive noise pollution caused by crackers:

An indirect but equally significant impact of Diwali on nature is due to the increased consumption. Since Diwali is also a celebration of abundance and wealth – many people believe that it is a good time to buy. Often, people go out and buy new items even when they don’t need them. Advertisements and hoardings scream out to people offerings sales extravaganzas, bargains, discounts encouraging us to buy more and more!

How does this increased consumption affect Nature?
A point to realize is that all man made items are made out of materials that come from Nature. Be it plastic, metal, paper or cloth – all of these raw materials come directly from nature. Those sources that are non renewable (cannot be grown back) such as fossil fuels and metal ores get depleted and will one day run out. Depletion of non renewable natural resources is one of the most significant impact of consumerism.

For instance, the gold earrings that you will buy on Diwali is coming from a gold mine that is not only depleting the gold resources of the earth, but in the process of mining is probably ruining several ecosystems.

A question to ponder at this stage is, where do all the things we throw away go finally? Solid waste created by human beings which is non biodegradable (does not easily decompose) has to be filled into holes dug up in the ground. These ‘landfills’ as they are called may exist for centuries without completely getting integrated into the soil. The plastic toys that you are throwing away today, may exist in a landfill several generations after yours!

Five Principles of Nature conservation
To be able to conserve our natural environment it is important to keep in the following principles –
Reduce: the amount of things we use
Reuse: the things we have in different forms until we have absolutely no use for them
Recycle: items that are no longer functional.
Rethink: the choices we make when deciding to buy something and
Refuse: things that we do not need at all.

So this Diwali, before you buy something new apply the above five principles and only then pay at the counter!

The festival of lights puts a considerably heavy load on electrical energy sources that are already overloaded. The use of electric lights to adorn homes, business establishments, monuments and roads requires a huge amount of electricity. The older tradition of burning oil lamps is a possible alternative to electric lights – even though it does use oil, the duration of the lamps is shorter.

Eco sensitive Initiatives around Diwali
With the growing recognition of the impacts of Diwali on the environment, several groups have started to reinterpret the rituals and traditions to become more sensitive to nature.

Wish you all Great Green and Prospers Diwali,

With Green Heart and Love,

The story behind the festival of Holi