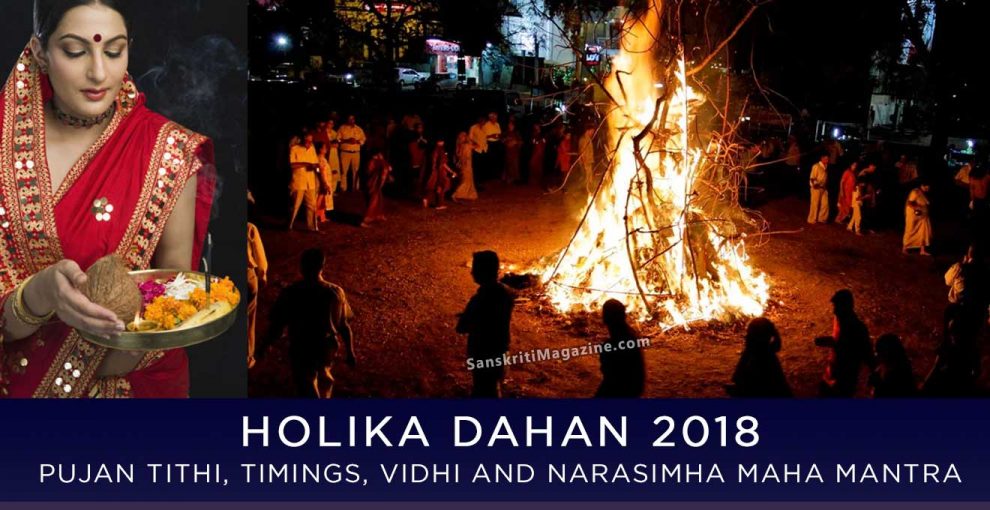 A day prior to the actual colour festival of Rang wali Holi, people collectively gather to perform the Holika Pujan.

It’s that time of the year when family, friends, relatives and neighbours get-together to celebrate joyous moments with vibrant colours. India is all set to celebrate the festival of colours – Holi – on March 2 this year.

But a day prior to the actual colour festival of Rang wali Holi, people collectively gather to perform the Holika Pujan in the evening post sunset to initiate the process of Holi celebrations by offering prayers to the almighty.

If you do not know how to perform Holika Dahan, then worry not. We have the vidhi (procedure) written below.

According to the Hindu Lunar calendar, Holika Dahan concurs with the full moon day in the month of Phalguna, a day which is also known as Phalguna Purnima. This year, Holi with colours (rang wali Holi) will be celebrated on March 2 and Holi Dahan puja will be performed on March 1.

Holika Dahan is a ritual performed on the eve of Holi. Before playing rang wali Holi, people offer their prayers to the Almighty.

People in the neighbourhood collectively organise a bonfire (referred to as the Holika Dahan) to mark the victory of good over the evil. The Dahan is usually performed during the Pradosh Kaal (which starts post sunset) while Purnimasi Tithi prevails.

The pristine devotion of a young boy named Prahalada for Lord Vishnu succeeds in annihilating the powers of his aunt Holika who attempts to kill him on her brother Hiranyakashyapu’s behest, a ruthless king of wanted to rule the world by force.

The Holika Dahan Puja is dedicated to the Narasimha avatar of Lord Vishnu. In this avatar, the Lord appears as half-man and half-lion. He took this unusual form to end all atrocities committed by the greedy Hiranyakashyapu.
People offer water, turmeric, coconut to the bonfire and seek blessings for a joyous life. (The offerings may vary from region to region).

Offer these to the bonfire.

Do parikrama or pradakshina (circumambulation) of the bonfire. Keep pouring water from the kalash as you walk around Holika.

The coconut offered to the Holika is then distributed as Prasad. Have the prasad and give it your friends and family.

Once the bonfire extinguishes, take home some ash. Apply the ash on your forehead.