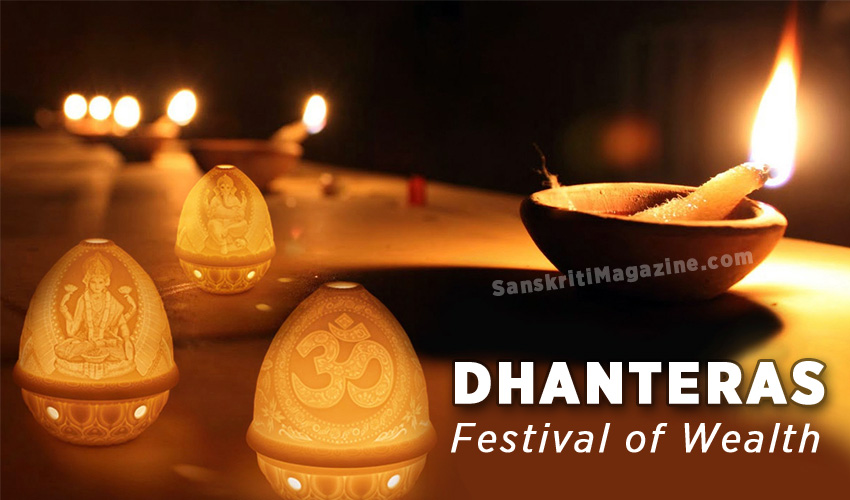 Kartik (Oct-Nov) on the thirteenth day of the dark fortnight. This auspicious day is celebrated two days before the festival of lights, Diwali.

How to Celebrate Dhanteras:

On Dhanteras, Lakshmi – the Goddess of wealth – is worshiped to provide prosperity and well being. It is also the day for celebrating wealth, as the word ‘Dhan’ literally means wealth and ‘Tera’ comes from the date 13th.

In the evening, the lamp is lit and Dhan – Lakshmi is welcomed into the house. Alpana or Rangoli designs are drawn on pathways including the goddess’ footprints to mark the arrival of Lakshmi. Aartis or devotional hymns are sung eulogizing Goddess Lakshmi and sweets and fruits are offered to her.

Hindus also worship Lord Kuber as the treasurer of wealth and bestower of riches, along with Goddess Lakshmi on Dhanteras. This custom of worshiping Lakshmi and Kuber together is in prospect of doubling the benefits of such prayers.

People flock to the jewelers and buy gold or silver jewelry or utensils to venerate the occasion of Dhanteras. Many wear new clothes and wear jewelry as they light the first lamp of Diwali while some engage in a game of gambling.

Legend behind the Dhanteras and Naraka Chaturdashi:

An ancient legend ascribes the occasion to an interesting story about the 16 year old son of King Hima. His horoscope predicted his death by snake-bite on the fourth day of his marriage. On that particular day, his newly-wed wife did not allow him to sleep. She laid out all her ornaments and lots of gold and silver coins in a heap at the entrance of the sleeping chamber and lit lamps all over the place. Then she narrated stories and sang songs to keep her husband from falling asleep.

The next day, when Yama, the god of Death, arrived at the prince’s doorstep in the guise of a Serpent, his eyes were dazzled and blinded by the brilliance of the lamps and the jewelry. Yam could not enter the Prince’s chamber, so he climbed on top of the heap of gold coins and sat there the entire night listening to the stories and songs. In the morning, he silently went away.

Thus, the young prince was saved from the clutches of death by the cleverness of his new bride, and the day came to be celebrated as Dhanteras. And the following days came to be called Naraka Chaturdashi (‘Naraka’ means hell and Chaturdashi means 14th). It is also know as ‘Yamadeepdaan’ as the ladies of the house light earthen lamps or ‘deep’ and these are kept burning throughout the night glorifying Yama, the god of Death. Since this is the night before Diwali, it is also called ‘Chhhoti Diwali’ or Diwali minor.

Another legend says, in the cosmic battle between the gods and the demons when both churned the ocean for ‘amrit’ or divine nectar, Dhanavantri – the physician of the gods and an incarnation of Vishnu – emerged carrying a pot of the elixir. So, according to this mythological tale, the word Dhanteras comes from the name Dhanavantri, the divine doctor.