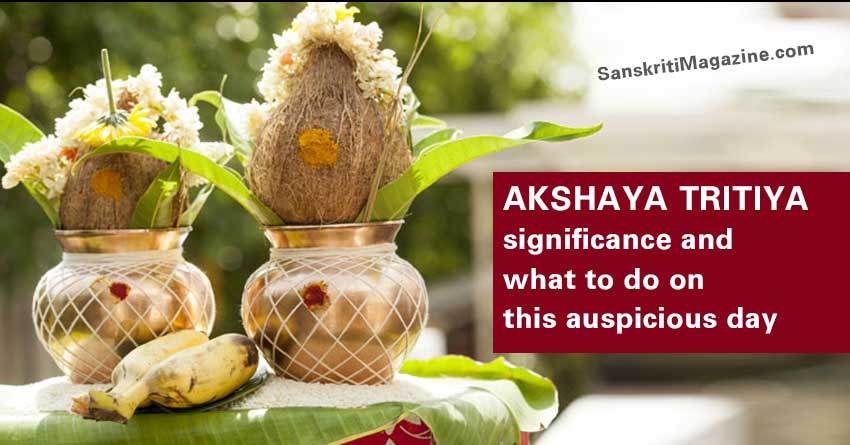 Unlike the popular belief that inspires people to invest in gold, Akshaya Tritiya is actually a day to share or donate food with the poor and the needy and helping those who are less privileged than us. It is not mandatory to buy gold today. A good deed like donating clothes or feeding the poor will serve the purpose and help you observe the symbolic day in the most sacred way.

Akshaya Tritiya, also known as Akha Teej, is a highly auspicious and holy day for Hindu and Jain communities. It falls on the 3rd Tithi (lunar day) of Bright Half (Shukla Paksha) of the Indian month of Vaishakha and this day is one of the brightest and luckiest days for Hindus. On this day the Sun and the Moon are at the height of their brightness. In 2016 Akshaya Tritiya falls on the 9th of May. It is one of the four most important days for Hindus. (Akshaya Tritiya is considered very auspicious if it is on the Rohini Nakshatra day of Wednesday).

Lord Parasurama, the sixth incarnation of Lord Vishnu was born on this day and hence this day is highly auspicious. It is said that Veda Vyas and Lord Ganesha started writing Mahabharata on this day. For Jains, this day commemorates the ending of the one-year fast by Tirthankara Rishabha by consuming sugarcane juice. Akshaya Tritiya is an auspicious day to start new ventures as it is believed that any endeavor started on this day will continue to grow and bring prosperity. The benefits of performing rituals such as Jap, Yagya, Pitra-Tarpan, Dan-Punya also stays with the person till perpetuity.

Akshaya means “Endless” that which never diminishes. As per Hindu Electional Astrology the three lunar days, Yugadi, Akshaya Tritiya and Vijay Dashami do not need any Muhurta to start any new ventures as these three days are free from all malefic effects. So there is no need to check the auspicious time to do any good deeds (kaarya) because each and every moment of these days are propitious. The jewelers also keep their shops open till late at night in the belief that their belongings are well protected.

Significance of this Day

What to Do On Akshay Tritiya:

Akshaya Tritiya is considered as one of the most auspicious festivals by Hindus. It marks the setting of Treta Yuga among the other three Yugas (Satya, Dwarpa and Kali).

On this auspicious day, one may perform Madhusudhana ritual, with Tulasi archan and also chant Sri Vishnu Sahasranaamam. Also, one may perform charities during this day which will certainly bless the donor.

Following are the charities (Daanam) one can undertake:

Apart from the above donations, one can also donate wheat which is believed to please the King of Heaven, Lord Indra who is in charge of rains. And the sufficient rains help grow plants and vegetation on Earth.

You may select the donation of your choice or may do all of them. The end results would be cessation of bad karma’s impacting the existing life which a gift from the Lord to realize one’s own self and their relationship with the Creator.

Holy Bath: Taking bath in the holy river rids one of all inauspiciousness and bad karmic reactions. One may take bath before sunrise in one of the Holy Rivers; Ganges, Yamuna, Godavari, Sindhu, Saraswati, Narmada, Krishna, Bhagirathi, Gandaki, Gomathi, Kaveri and Phalgu.

Narasimha Jayanti
Happy Vishu – Significance; how and why is it celebrated?
Comment