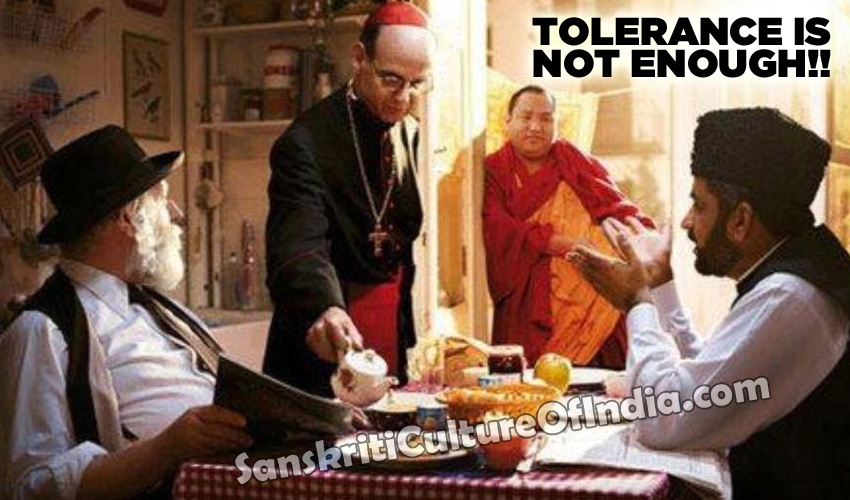 Is being tolerant good enough in Interfaith Relations?

It is fashionable in interfaith discussions to advocate “tolerance” for other faiths. But we would find it patronizing, even downright insulting, to be “tolerated” at someone’s dinner table. No spouse would appreciate being told that his or her presence at home was being “tolerated.” No self-respecting worker accepts mere tolerance from colleagues. We tolerate those we consider inferior. In religious circles, tolerance, at best, is what the pious extend toward people they regard as heathens, idol worshippers or infidels. It is time we did away with tolerance and replaced it with “mutual respect.”

Religious tolerance was advocated in Europe after centuries of wars between opposing denominations of Christianity, each claiming to be “the one true church” and persecuting followers of “false religions.” Tolerance was a political “deal” arranged between enemies to quell the violence (a kind of cease-fire) without yielding any ground. Since it was not based on genuine respect for difference, it inevitably broke down.

My campaign against mere tolerance started in the late 1990s when I was invited to speak at a major interfaith initiative at Claremont Graduate University. Leaders of major faiths had gathered to propose a proclamation of “religious tolerance.” I argued that the word “tolerance” should be replaced with “mutual respect” in the resolution. The following day, Professor Karen Jo Torjesen, the organizer and head of religious studies at Claremont, told me I had caused a “sensation.” Not everyone present could easily accept such a radical idea, she said, but added that she herself was in agreement. Clearly, I had hit a raw nerve.

I then decided to experiment with “mutual respect” as a replacement for the oft-touted “tolerance” in my forthcoming talks and lectures. I found that while most practitioners of dharma religions (Hinduism, Buddhism, Jainism and Sikhism) readily espouse mutual respect, there is considerable resistance from the Abrahamic faiths.

Soon afterwards, at the United Nation’s Millennium Religion Summit in 2000, the Hindu delegation led by Swami Dayananda Saraswati insisted that in the official draft the term “tolerance” be replaced with “mutual respect.” Cardinal Joseph Ratzinger (now Pope Benedict), who led the Vatican delegation, strongly objected to this. After all, if religions deemed “heathen” were to be officially respected, there would be no justification for converting their adherents to Christianity.

The matter reached a critical stage and some serious fighting erupted. The Hindu side held firm that the time had come for the non-Abrahamic religions to be formally respected as equals at the table and not just tolerated by the Abrahamic religions. At the very last minute, the Vatican blinked and the final resolution did call for “mutual respect.” However, within a month, the Vatican issued a new policy stating that while “followers of other religions can receive divine grace, it is also certain that objectively speaking they are in agravely deficient situation in comparison with those who, in the Church, have the fullness of the means of salvation.” Many liberal Christians condemned this policy, yet it remains the Vatican’s official position.

My experiments in proposing mutual respect have also involved liberal Muslims. Soon after Sept. 11, 2001, in a radio interview in Dallas, I explained why mutual respect among religions is better than tolerance. One caller, identified as a local Pakistani community leader, congratulated me and expressed complete agreement. For her benefit, I elaborated that in Hinduism we frequently worship images of the divine, may view the divine as feminine, and that we believe in reincarnation. I felt glad that she had agreed to respect all this, and I clarified that “mutual respect” merely means that I am respected for my faith, with no requirement for others to adopt or practice it. I wanted to make sure she knew what she had agreed to respect and wasn’t merely being politically correct. The woman hung up.

In 2007, I was invited to an event in Delhi where a visiting delegation from Emory University was promoting their newly formed Inter-Religious Council as a vehicle to achieve religious harmony. In attendance was Emory’s Dean of the Chapel and Religious Life, who happens to be an ordained Lutheran minister. I asked her if her work on the Inter-Religious Council was consistent and compatible with her preaching as a Lutheran minister, and she confidently replied that it was. I then asked: “Is it Lutheran doctrine merely to ‘tolerate’ other religions or also to respect them, and by respect I mean acknowledging them as legitimate religions and equally valid paths to God”? She replied that this was “an important question,” one that she had been “thinking about,” but that there are “no easy answers.”

It is disingenuous for any faith leader to preach one thing to her flock while representing something contradictory to naive outsiders. The idea of “mutual respect” poses a real challenge to Christianity, which insists that salvation is only possible by grace transmittedexclusively through Jesus. Indeed, Lutheran teaching stresses this exclusivity! These formal teachings of the church would make it impossible for the Dean to respect Hinduism, as opposed to tolerating it.

Unwilling to settle for ambiguity, I continued with my questions: “As a Lutheran minister, how do you perceive Hindu murtis (sacred images)? Are there not official injunctions in your teachings against such images?” “Do you consider Krishna and Shiva to be valid manifestations of God or are they among the ‘false gods’?” “How do you see the Hindu Goddess in light of the church’s claim that God is masculine?” The Dean deftly evaded every one of these questions.

Only a minority of Christians agree with the idea of mutual respect while fully understanding what it entails. One such person is Janet Haag, editor of Sacred Journey, a Princeton-based multi-faith journal. In 2008, when I asked her my favorite question — “What is your policy on pluralism?” — she gave the predictable response: “We tolerate other religions.” This prompted me to explain mutual respect in Hinduism wherein each individual has the freedom to select his own personal deity (ishta-devata, not to be confused with polytheism) and pursue a highly individualized spiritual path (sva-dharma). Rather than becoming defensive or evasive, she explored this theme in her editorial in the next issue:

Haag explained that the Latin origin of “tolerance” refers to enduring and does not convey mutual affirmation or support: “[The term] also implicitly suggests an imbalance of power in the relationship, with one of the parties in the position of giving or withholding permission for the other to be.” The Latin word for respect, by contrast, “presupposes we are equally worthy of honor. There is no room for arrogance and exclusivity in mutual respect.”