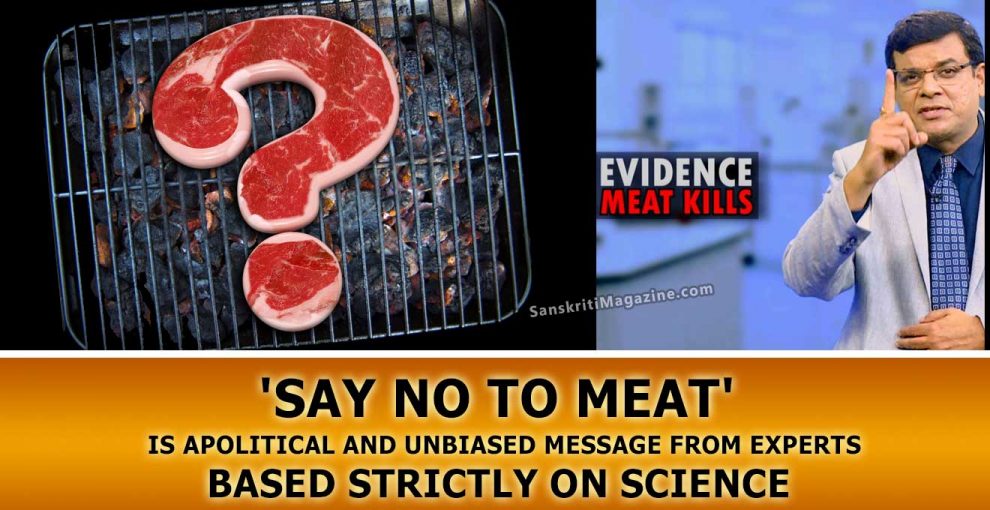 “To consume meat or not to” — has been a never-ending debate between those supporting non-vegetarian lifestyle and those opposing it. And the recent religio-political dash added to slaughter of animals has only accentuated the debate among people.

However, a soon-to-be-released documentary that hinges on scientific evidences from top medical institutions and experts from within and beyond India will possibly bury much of the “to eat or not to” confusion.

“The Evidence – Meat Kills”, a documentary by Mayank Jain, puts forth scientific facts to prove that animal-based food like meat and eggs can cause irreparable damage to human health. However, milk is not part of the debate.

“The world over, a movement is going on to drastically reduce consumption of meat, eggs and other animal-based food for better health and longevity. The documentary is a sincere attempt to educate the masses on why they must abstain from non-vegetarian lifestyle,” Jain told IANS.

The 75-minute documentary, which will soon be released here by a group of globally-acclaimed medical experts, features views of senior professors from the All India Institute of Medical Sciences (AIIMS), Delhi; Tata Memorial Hospital, Mumbai; and foreign research institutes based in Canada and America, among others.

The film shows that owing to increased intake of animal-based food and fast foods, there is an abnormally high increase in the spread of colorectal cancers, heart problems, kidney failures and type-2 diabetes throughout the world.

Rakesh Tandon, former HoD, Gastroenterology, AIIMS, says in the film: “I as a gastroenterologist see an increase in colonic cancer in the country… This kind of cancer was more common in the western world than among the oriental people. I think this is because of the change in our dietary habits… Meat-eaters tend to have a higher incidence of colonic cancer.”

On the culture of changing food habits with the advent of fast foods, S.C. Manchanda, Senior Consultant Cardiologist, Sir Ganga Ram Hospital, Delhi, says: “It is very unfortunate that in our country more and more children are becoming non-vegetarian, whereas in the West, more and more people are turning to vegetarianism — because there is lots of scientific evidence that you avoid many diseases and remain healthy if you are a vegetarian.”

Eating meat can have adverse effects not only on the health of the person but also on their offspring, especially in case of women.

According to Brijesh Arora, Professor – Pediatric Oncology at Tata Memorial Hospital, Mumbai, if mothers take a lot of red meat and processed meat and do not take adequate amount of vitamins and minerals, there is a chance that babies born to them, compared to a vegetarian mother, would have greater chances of having congenital abnormality, including some degree of lower sperm count and infertility in long term.

The prevalent western diet results in consumption of huge amounts of animal proteins, dietary cholesterol, saturated fats and harmful chemicals, which play a key role in the spread of life-threatening disorders. “Such diet, unlike a whole-foods plant-based diet, lacks “good health protection agents” like dietary fibre, anti-oxidants and phyto-nutrients,” says an expert.

David Spence, Director – Stroke Prevention & Atherosclerosis Research Centre, Robarts Research Institute, Canada, advises even against the intake of eggs based on fact that every single egg contains a huge amount of cholesterol: “One large egg yolk has 213 mg of cholesterol, which is nearly as much as a 12-ounce monster burger.”

Spence also cites an example of how high-cholesterol food items are being marketed on falsehood: “There is a company in the States called Hardies that markets this 12-ounce burger with beacon and cheese and their website said this burger had less cholesterol than one egg yolk.”

A senior kidney specialist has been shown as saying: “?first thing we tell the patients is ‘stop non-veg’ and ‘shift to vegetarian diet’. That is our first prescription…any kidney disease… because meat and other non-veg proteins definitely put load (on kidneys) and (increases) hyperfiltration (sic).”

“Use of antibiotics and hormones has become almost routine in not only poultry but also in the meat industry in general, and the types of antibiotics used are very often not fit for human consumption. Although not approved for human use, these are given to animals and indirectly the same antibiotics get into human beings when we consume meat,” says Ramesh Bijlani, former HoD – Physiology, AIIMS.

“Animals taken to the slaughter houses sense there is a danger to their lives. (Due to this fear) their stress hormones are released and animals become aggressive, violent and want to run away from that place. These neuro-transmitters get accumulated in their tissues… Consuming their meat or meat products can lead to some behavioural changes,” he points out.

With the help of scientific data, the film concludes that some of the most dangerous chronic diseases could not only be controlled but even reversed with help of a low-fat whole-foods plant-based diet.

So, rising above the emotive issue of “animal slaughter” and not being carried away by the religiosity of eating or not eating animal-based food, perhaps it is time we said say no to the non-vegetarian lifestyle. At least that’s what the documentary suggests.