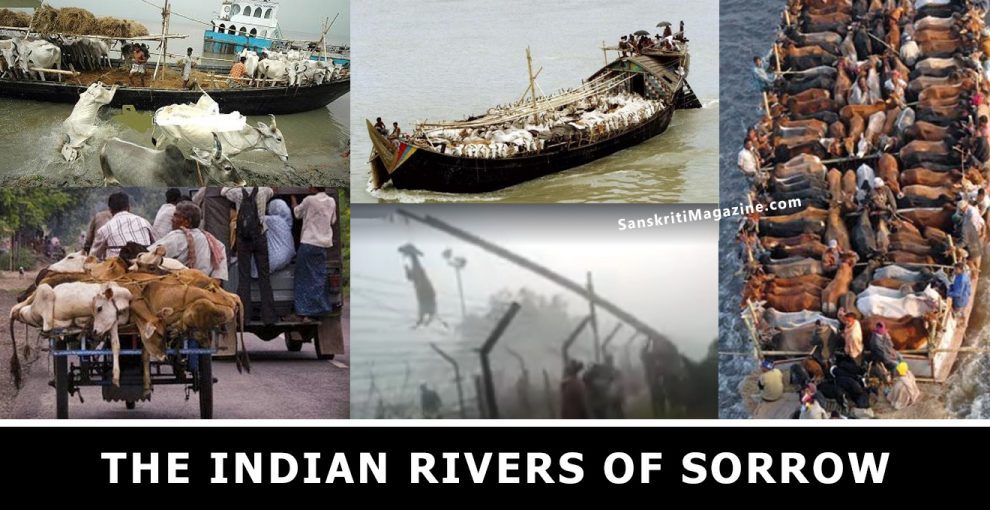 The recent pictures of the rivers of blood flowing through Bangladeshi streets presents the most obnoxious facet of the word ‘Humanity’. The ruthless and merciless slaughtering of cattle transported through the length and breadth of India into Bangladesh still does not seem to be of any significance to the state Governments and the Central Government of this country.

Each day thousands of cattle are smuggled into Bangladesh from India through an organized racket. Whether young calves or old bulls, whether from the western most parts of India as far as Rajasthan, Gujarat, or from Punjab, Haryana and Uttar Pradesh, or some of the neighboring states as West Bengal and Orissa, the distance does not matter. And the state governments seem oblivious of the facts and cannot see the rampant trade.

Stuffed upon each other mercilessly into trucks, the trucks pass from one state to another suffocating them, breaking their horns and tails and fracturing their limbs. The cattle are deliberately made to go without food and water for their entire last journey lasting for 3-4 days. For those who happen to survive still, a gruesome death awaits them.  They are then transported across the riverine border, and all parties whether it is the bureaucrats in the local governments, local politicians, local police, border security force from the Indian side and the Bangladesh revenue Board on the other side are all hand in glove with the smugglers.

There remains nothing sacrilegious, nor anything seems to be a legal or moral crime. The greed driven traffickers are highly upbeat about their business. Transactions are done through hawala, the buyer pays cash locally to an agent in Bangladesh, and the payment is obtained in India via another agent. Some slaughterhouse owners in Uttar Pradesh give monthly bribes up to Rs 60 lakhs to all concerned.

The traffickers hire gang of local thieves to troll the streets at night to catch the animals at night. The complete connivation of all parties involved through the Indian subcontinent spanning a distance of 1500 kms results in the most horrific spell of doom to Indian cattle in Bangladeshi abattoirs.

The life of an ordinary Indian cow begins with misery, continues through in misery and ends in an even more dreaded miserable and treacherous death. As a young calf is born, he is separated from his mother. Some are not fed a drop of milk, while are fortunate enough to be fed mother’s milk for a few days thanks to the owner’s magnanimity.

The young calf is then either straight away sent to the butcher house, or left on the streets to search for food in the filthiest of the garbage bins, or to manage the life on streets with the traffic, other animals, or the weather.

They die of hunger and thirst, or are hit by the traffic, or are scratched by dogs, and some cattle owners tie them in the scorching sun till they die of sunstroke and thirst.

And this all because so called humans can feed their children the milk and ice creams made from the milk that belonged to this particular young calf.

Meanwhile the mother cow keeps looking for her young one, and no value is attached to those tears that turns black while waiting for her newborn, who never happens to come back. And this is not the story for once, because cattle in this country has attained the same status as poultry and each time the cow gives birth, the same story is repeated.

For young bulls and calves, old non milk yielding cows in the outskirts of cities of Uttar Pradesh and Hyderabad, the slaughterhouses have great preparations. The trucks that have transported the cattle through the length of the country, the overloaded trucks arrive with the cattle, half of them have died due to suffocations, other have died due to the weight of other cattle on them, others have died due to starvation and thirst. On reaching their destination, they are unable to get up and walk on their limbs. Then they are whipped and are forced to walk towards their ultimate death. The final walk leads them to a very large room where they can finally sit for the last time. Then their leg is tied with a clover leaf, and are suspended upside down.

Hot water at a burning temperature of 200 degree Celsius is then poured onto them while they are still alive to make their skin soft.

And all this so that some so called fashion vistas can have their bags, purses and shoes made of soft calf leather, attend parties and enjoy the fruits of  the most cruel, gruesome death existing in the pertinents of the planet Earth.

Half of the cattle become unconscious after this major step, but are still alive. And for those who are conscious, there still remains the final blow of death.

The skin is then first torn off while they are alive, because at this juncture it is the softest. And then the throat is slit. From one side blood is oozing out, leading to rivers of blood flowing in the country where cattle was supposed to be worshipped, and on the other side the skin is being torn apart. Finally this marks an end of the journey of living hell on earth, and the cow can finally ‘breathe’ a sigh of relief because the soothing hand of ‘death’ has finally arrived. The misery, the sorrow, the wait, anguish and suffering is finally over. Life has given the cattle of this country a ‘Living Death’ and what seems to relieve them is their final death.

Slow comes the miserable death, such a death that does not exist even in the legendary descriptions of “hell’ in any religion.

And then the so-called “human beings’ eat their flesh, get foreign exchange from the export of their flesh, skin and blood, and call themselves ’Progressive’ after spending this money on the construction of malls, highways and theatres.

This is an utter shame that India calls itself a “progressive’ nation after ignoring the existence of such brutal acts on a most noble, simple and pious animal who was once worshipped in this country. The rivers of milk that flowed in India are replaced by the Rivers of Blood.

No country can be called “Humane” who treats their cattle with such ruthlessness. We seem to have forgotten the roots of our country and our soil, the great glorious culture.

It is said that the Muslim invasion of India is unparalled in human history. The rampage of the Indian soil, the breaking of Hindu temples, the moot of treasures, great inhuman treatment meted out to cows and Indian Hindu women at that time has transgressed the passage of time. No matter that a thousand years have passed, but the wounds remain afresh in the souls of those tormented at that time. But inspite of the independence from foreign invaders whether the Muslim rulers or the British, many legislations still remain the same as made by the Mughal rulers or those made by the British, for instance cow slaughter in West Bengal.

As India ‘progresses’ in modern age, the time has come to revive the original culture and heritage of India, the foremost being ‘Cow Protection’.