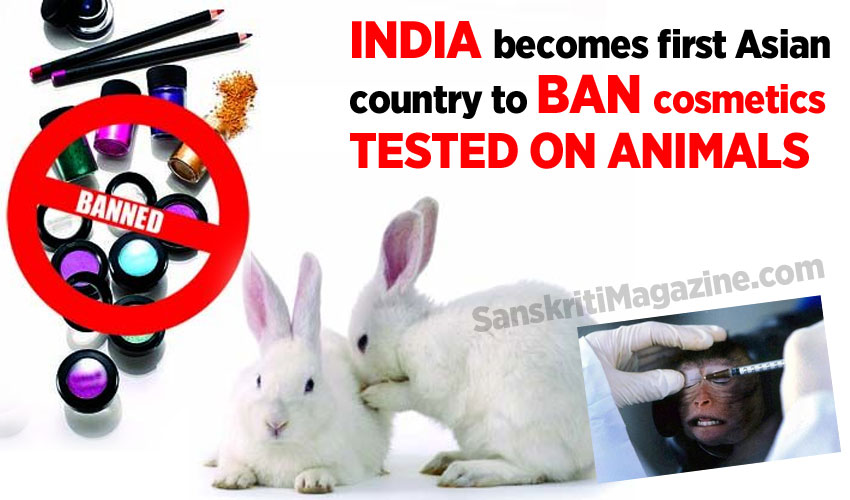 Nearly five months after banning cosmetic animal testing within the country, India has now also imposed a ban on importing such products that test on animals and thus become the first country in south Asia to do so.

The government on Monday notified a rule to this effect, prohibiting “import of cosmetics tested on animals” from November 13.

This amended Drugs and Cosmetics Rules, imposing dual ban (test and import), has now put India in the league of European Union and Israel that had imposed such ban long ago.

The gazette notification, issued by the ministry of health and family welfare on Monday, said that no cosmetic that has been tested on animals after the commencement of this notification would be imported into the country.

It gave 30 days for this notification to be effective, allowing the enforcement authorities to strictly go for the import ban from November 13.

Welcoming the decision as a historic move, India’s chapter of the Humane Society International (HSI India) that has been campaigning for this ban for long said, “Coming just few months after implementation of a ban on cruel cosmetics testing in India’s labs, the import ban now makes India the first cruelty-free cosmetics zone in South Asia and an example for other nations to follow”.

Alokparna Sengupta, HSI India’s ‘Be Cruelty Free’ campaigns manager, said, “This is a huge achievement that could not have been possible without the compassion of our government, consumers and industry. We feel confident that if this vision is applied to other areas of product testing, this can be a defining moment in the modernization of India’s safety science”.

Gauri Maulekhi, trustee of the People for Animals, said: “India has shown outstanding leadership by so swiftly advancing first a ban on cosmetics animal testing and now a ban on animal-tested cosmetics imported from overseas. By working so diligently with the ‘Be Cruelty Free’ India campaign, our policymakers have put India on the map as a country transforming its laboratories and regulation from outdated test methods to state-of-the-art science”.

The HSI India has been following up the issue with successive governments for long. It had in June presented a petition of more than 70,000 signatures, supporting an import ban, to the new Union health minister Harsh Vardhan and apprised him of the cruel practice of testing for cosmetics on animals.

Noting contributions of Union minister Maneka Sanjay Gandhi and senior BJP leaders LK Advani and Murli Manohar Joshi in getting the dual test and import ban, the HSI India said, “India’s dual test and import ban mirrors that of the European Union and is the latest victory in a string of achievements for the ‘Be Cruelty Free’ campaign globally”.