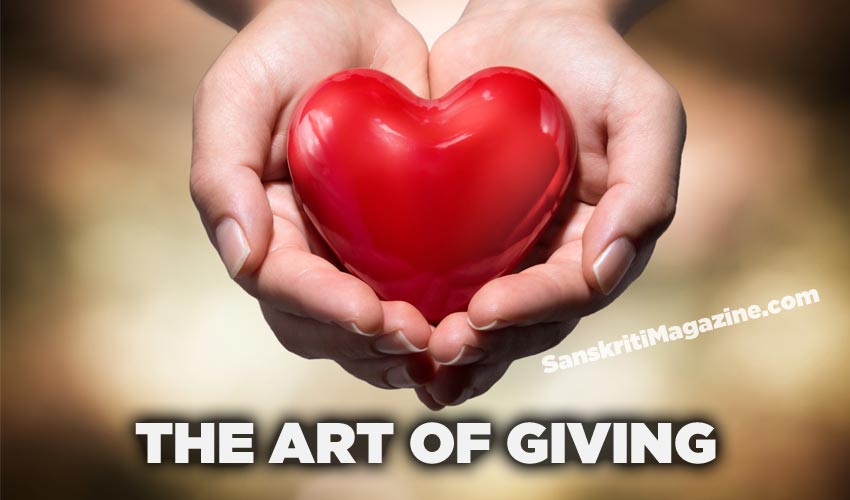 “Rivers do not drink their own water, nor do tree eat their own fruit,

nor do rain clouds eat the grains reared by them.
The wealth of the noble is used solely for the benefit of others?

Even after accepting that giving is good and that one must learn to give, several questions need to be answered.

The first question is when should one give ?

Yudhisthir asks a beggar seeking alms to come the next day.
On this, Bhim rejoices , that Yudhisthir his brother, has conquered death!
For he is sure that he will be around tomorrow to give. Yudhisthir gets the message.
One does not know really whether one will be there tomorrow to give!

The time to give therefore is  NOW.

The next question is ‘how much to give ?

One recalls the famous incident from history.
Rana Pratap was reeling after defeat from the Moghals.

At that time in his darkest hour, his erstwhile minister Bhamasha came seeking him and placed his entire fortune at the disposal of Rana Pratap.
With this , Rana Pratap raised an army and lived to fight another day.

The answer to this question how much to give is ” Give as much as you can !

The next question is what to give ?

It is not only money that can be given.
It could be a flower or even a smile.
It is not how much one gives but how one gives that really matters.

When you give a smile to a stranger that may be the only good thing
received by him in days and weeks!

“You can give anything but you must give with your heart !

One also needs answer to this question whom to give ?

Many times we avoid giving by finding fault with the person who is seeking.

However, being judgmental and rejecting a person on the presumption that he may not be the most deserving is not justified.

“Give without being judgmental !

Next we have to answer ‘How to give ?

Coming to the manner of giving , one has to ensure that the receiver does not feel humiliated , nor the giver feels proud by giving.

‘Let not your left hand know what your right hand gives?
Charity without publicity and fanfare, is the highest form of charity.

While giving let not the recipient feel small or humiliated.

After all what we give never really belonged to us.
We come to this world with nothing and will go with nothing.
The thing gifted was only with us for a temporary period.
Why then take pride in giving away something
which really did not belong to us?

Give with grace and with a feeling of gratitude.

What should one feel after giving ?

We all know the story of Eklavya.
When Dronacharya asked him for his right thumb as “Guru Dakshina”.
He unhesitatingly cut off the thumb and gave it to Dronacharya.

There is a little known sequel to this story.
Eklavya was asked whether he ever regretted the act of
giving away his thumb when he was dying.

His reply was “Yes ! I regretted this only once in my life.
It was when Pandavas were coming in to kill Dronacharya who was broken-hearted on the false news of death of his son Ashwathama and had stopped fighting.
It was then that I regretted the loss of my thumb.

If the thumb was there, no one could have dared hurt my Guru?

The message to us is clear.

Give and never regret giving !

And the last question is  ‘ How much should we provide for our heirs ?

Ask yourself , ‘Are we taking away from them the “gift of work?
– a source of happiness!’

The answer is given by Warren Buffett:

I would conclude by saying:
let us learn the Art of Giving,
and quoting Sant Kabir:

“When the wealth in the house increases,
When water fills a boat,
Throw them out with both hands !

This is the wise thing to do!

It is time India had a Good Samaritan law
Raju the elephant cries after 50 years of captivity, abuse
Comment