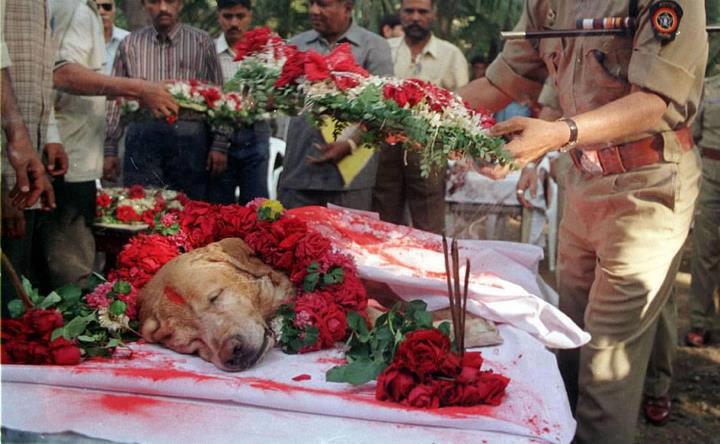 Zanjeer was a detection dog who spotted weapons and ammunition used in 1993 Mumbai serial explosions. This lab helped detect 57 country-made bombs, 175 petrol bombs, 11 military bombs, 242 grenades, and 600 detonators. He was most known for his contribution to the police force for detecting 3,329 kg of RDX.

Without Zanjeer’s contribution, the death toll would have skyrocketed to a very high number. His training in sniffing and detecting explosives definitely paid off. Many people owed their lives to Zanjeer for all he had done for their city.

The nine-year-old Labrador was admitted to the hospital after it developed swellings in the lungs and paws.

Among the eight dogs with the squad, Zanjeer was regarded as a hero. He was cremated with full state police honour…

In the photo above, a senior police officer lays a wreath of flowers on Zanjeer as he was buried with full police honors at a widely-attended ceremony.

Mumbai’s police dog squad has been operational since December 1959, the Times of India reported. It began with just three Doberman Pinschers, who were used for tracking criminals.