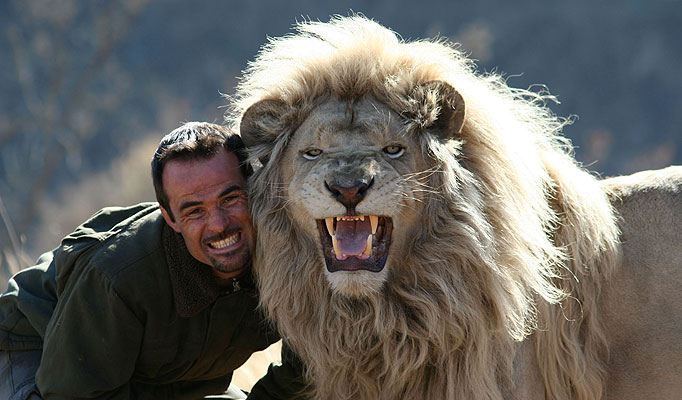 A breathtaking video reveals one man’s unique bond with one of the world’s most feared animals as he is seen hugging and cuddling lions and hyenas in South Africa.

In the video, originally posted in November, Kevin Richardson teamed up with GoPro to provide an inside look at his wildlife sanctuary just outside the town of Pretoria, South Africa.

Richardson, the self-proclaimed “lion whisperer,” can be seen calling the lions by name as they each take a turn wrapping their massive paws around him, giving him a hug before knocking him to the ground.

“I lie down there next to them and I just think, ‘you are so beautiful,’” Richardson said. “If you give them a good chin scratch, they are very happy, content cats.”

Based in Johannesburg, Richardson is a self-taught animal behaviourist who has spent the past 16 years developing his unique relationship with lions to help raise awareness to the plight of lions and their diminishing habitat.

“People around the world still think Africa is this place teeming with game, it just doesn’t happen,” he said. “You can drive for days and see nadda, not a single animal.”

According to The Kevin Richardson Wildlife Sanctuary, the lion population currently occupies less than 20 per cent of its former range in Africa.

It’s the sanctuary’s mission “to provide a self-sustaining African carnivore sanctuary for the purposes of wild species preservation through education, awareness and funding, especially pertaining to the rapid decline of large carnivores in Africa due to habitat loss, human-predator conflict, unscrupulous hunting, disease and their illegal trade.”

We are all the same…

Animals have wisdom beyond our understanding!