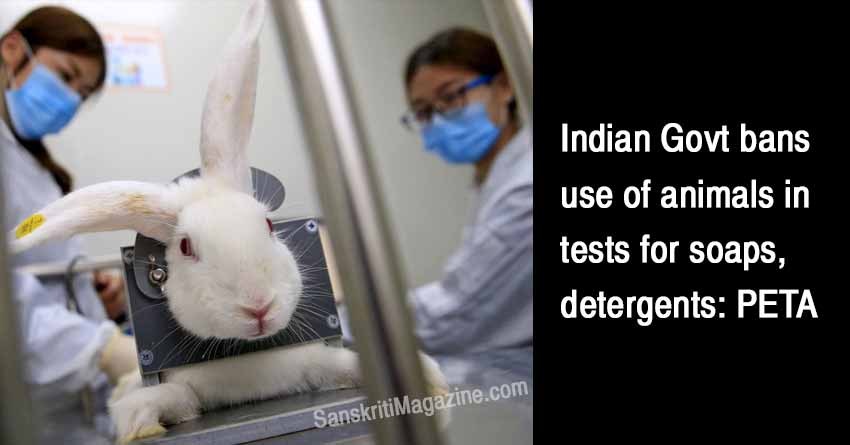 NEW DELHI: A ban has been imposed with immediate effect on the use of animals in tests for manufacturing soaps and detergents, an animal rights body said on Monday.

People for the Ethical Treatment of Animals (PETA), India, claimed to have received a circular, through an RTI, issued by the Committee for the Purpose of Control and Supervision of Experiments on Animals (CPCSEA), under the Environment Ministry in this regard.

“Through a Right to Information (RTI) request, PETA India has received a circular recently issued by the Committee for the Purpose of Control and Supervision of Experiments on Animals (CPCSEA) to manufacturers and industry associations that prohibits the use of animals in tests of soaps and detergents, effective immediately,” it claimed.

The circular, PETA said, is the “final” step in the process initiated by it in 2014, when the animal rights group had successfully worked with Bureau of Indian Standards (BIS) to remove tests on animals from the testing standards for household products such as soaps, detergents and other surface active agents – an effort supported by now-Union Minister Maneka Gandhi and other MPs.

“Consumers will be delighted to know the production of soaps and detergents manufactured in India will not involve harming rabbits, mice or guinea pigs.

“However, household products manufactured abroad can still be tested on animals. We continue to urge consumers only buy from those companies listed as cruelty-free on PETA’s website,” said Dipti Kapoor, PETA India research associate.

PETA said more than 2,000 companies around the world have banned all testing on animals in favour of effective, modern non-animal methods, but many still choose to subject animals to painful tests in which substances are “dripped into their eyes, sprayed in their faces or forced down their throats”.

“Before PETA India succeeded in ending household-product tests on animals in India, one mandatory test under BIS requirements called for harsh chemicals to be rubbed onto the sensitive skin of guinea pigs.

“Because of the vast physiological differences between humans and the animals used in these tests, the results are often misleading,” it claimed.

We are all the same…

Amma – Ragpicker by the day. By Night She Is Mother To 400 Of Delhi’s Stray Dogs
Comment