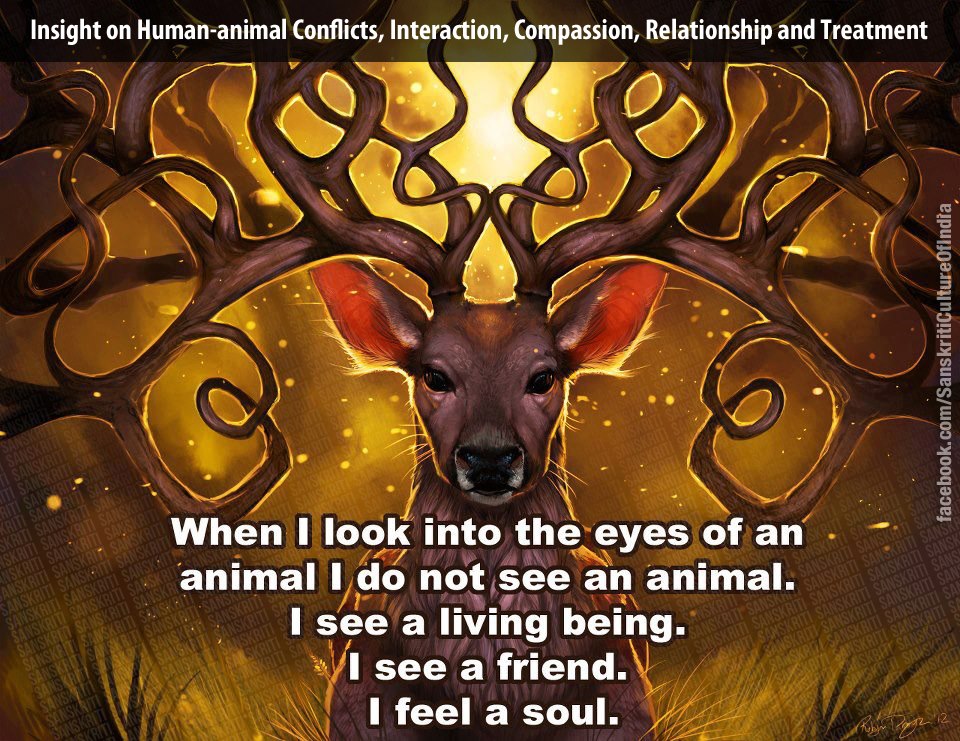 A man can live and be healthy without killing animals for food; therefore, if he eats meat, he participates in taking animal life merely for the sake of his appetite. — Leo Tolstoy

In India, though we worship animals, we don’t treat them well. Why?

Do you think animals help us become more compassionate?

Animals touch us in a special way. Our relationship with animals can lead us to that which is true within us and, through the discovery of that truth, we can find direction. Animals teach us how to love and how to enjoy being loved. They also make us realise how loving itself is an activity that generates more love. The human-dog relationship is the finest example of this sharing of love. Through our contact with animals, we can learn how to overcome our limitations and differences. They can even help us discover new frontiers of consciousness.

The relationship between animals and human beings been further enhanced by religious beliefs. The human-animal bond is a mutually beneficial and dynamic one that is influenced by behaviours that are essential to the well-being of both.For many, nature is a source of spiritual inspiration. I wouldn’t say that the relationship has weakened — though there have been frequent clashes!

What is the reason for increasing human-animal conflict?

Unlike other animals, man changes the environment around him instead of adjusting himself to it and ends up disturbing the life of other animals. This leads to conflict. Because of his intelligence, man thinks that he has the right to control everything.

For animals, though, it is a question of survival. If an elephant tramples a man, you cannot call it a murderer. With increase in population numbers, we are encroaching space that is part of animal habitat. When an animal strays from the forest and into human-occupied territory, we say that the animal is encroaching!

In the Yercaud forest, there is a track which bisons use to reach the watering hole. Some property owners have built compound walls, unknowingly blocking their path. Now the animals don’t know that they have to take a different route. Instinctively, they will try to break the wall to remove the obstacle.

Pollution and global warming, both human made problems, have endangered many species because of the unnatural change in atmospheric temperature and its effect on the environment.

Zanjeer the detection dog
Lesson of the wild…
Comment