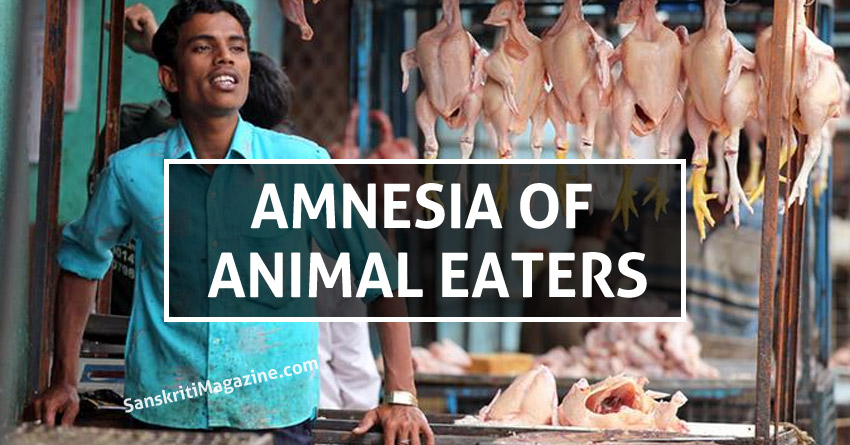 Some time ago, a man in the US was sentenced to 6 months in jail for tying his dog to his car and dragging him to death. The dog had ‘barked too much’ which made his owner furious. Neighbours chased the man. They were rightly upset by his cruel act and, except for some perverse and pathological misfits, every human being who deserves this label will surely condemn brutal treatment of animals.

This new item, however, reminded me of a German saying, which means: “What I don’t know does not agitate me.” In all likelihood, the neighbours of that American are meat eaters. Are they aware of the heart-breaking life and finally slaughter of all those chicken, cows, pigs, sheep or goats in the so called meat industry? Probably they vaguely are, yet somehow it does not get at them. It seems one needs to be personally involved with one chicken or one cow, see the suffering, look into her anguished eyes, to realise the cruelty and resolve not to partake in it anymore.

It happened to a young German couple who had been on a camel safari in Rajasthan. They told me about the safari, yet their narration centred only on one thing: the chicken. “Do you want chicken for dinner”, the agent had asked. “Okay”, they had answered, not guessing what this would entail. They started on their camel ride with great anticipation. Yet soon they noticed that a chicken was tied to one camel, legs up, head down. The chicken was clearly miserable and as the day progressed it lost feathers, turned bluish, and was half dead yet still alive. My friends could think of nothing else but the chicken. They felt so sorry for it. Their safari was spoilt. In the evening the chicken was “made” but they could not eat it. “I don’t think I can ever eat a chicken again”, the woman said.

In India, animals are out in the open, in contrast to so called developed west where most people even in small towns see only pet dogs or cats and never come face to face with a cow or even a hen in their whole life.  In India everyone comes close to cows, goats, pigs, monkeys, dogs, hens, elephants… and foreign tourists get sometimes very incensed at their treatment. They feel pity for the stray dogs, condemn the neglect of the cows wandering the streets and are furious at animal sacrifice at some temples. And I agree, it is terrible to see on the road side low cages crammed with hens that can’t move or a goat tied in front of a butcher’s shop or being led to a temple where it will be killed soon after or a picture in the local paper of a truck that had been caught packed with pitiable cows intended for slaughter.

Yet India is still the one country standing out in the world: it has the greatest percentage of vegetarians and is therefore comparatively good to animals. By far the greater (legal) crime of even unimaginable proportions is committed in the western world, only – there it is hidden and euphemised in language. It is a clever business strategy, because who would like to know that he chews on a cadaver of an animal that had a pitiful life? So, the meat is made to appear as if it is not connected to a formerly living being. Nobody, except those who work in the ‘meat industry’, is confronted with the brutality involved. Those who eat meat, and in the west almost everyone does, betray a total amnesia about the torture and slaughter of ‘live stock’.

Swami Chidanand of Parmarth Ashram in Rishikesh wrote a small book titled “Vegetariansm: for your body, your mind, your soul and your planet” and gives chilling facts: in USA alone some 20 million chicken and 90.000 cows are butchered every day. In a year over 10 billion animals are slaughtered in USA alone. The numbers are inconceivable and don’t convey the suffering and fear of each single one of those creatures who have done no harm to us. We might condone the killing with the argument that in nature, too, one species feeds on another. Yet the human species is certainly the worst. In the majority of cases we don’t need the meat. In fact we would be healthier without it. We eat it for pleasure and don’t even think about what it entails. Swami Chidanand mentions that the national news network in the US broadcasted videotapes of the world’s biggest meat packing company.

“The tapes showed struggling, conscious cows hoisted upside down and butchered… fully conscious cows were skinned alive, their legs cut off while struggling for freedom. Cows were shown being hit repeatedly with stunning devices that did not work. Other cows were tortured and repeatedly shocked with cattle prods and workers were shown shoving an electric prod into a cow’s mouth.”

There would be much more to quote from his book about the miserable lives and terrible treatment of calves, pigs, geese, turkeys and hens by big agriculture. It churns one’s stomach reading about it and thanks to books like the one by Swami Chidanand or email forwards with photos, people do become more aware nowadays. Small farms are coming up where animals are treated better and vegetarianism is on the rise in the west.

Unfortunately, in India, meat eaters are on the rise. Alone the number of chicken eaters in India has doubled from 2000 to 2007 according to a study by Newsweek. Maybe eating chicken or a hamburger is considered cool and modern, like drinking cola or eating chips. In India it is known, unlike in the west, that what one eats, influences the mind. Just think of the sad life and fear the animal experienced before being killed. Do you really want to eat it? Besides, digesting meat takes up to 72 hours. Just imagine it rotting in your system for three days at a heat of 37 degrees C. It is acknowledged that vegetarian diet is healthier for body and mind. It is also better for the planet, as animal foods industries cause almost half of the greenhouse gas emissions worldwide and it helps to feed many more people, as across the world, an average of 40% of the grain harvested is used to ‘produce’ meat. And it is better for one’s spirit if one does not indirectly support that colossal bloodbath that is happening day in day out hidden from our eyes. Probably most people could not eat meat anymore if they saw what had happened to the animal that is on their plate.

Campaigning for animal rights is incomplete and insincere if it includes only those animals that are out in the open and excludes our animal brothers and sisters who are mercilessly pushed into slaughterhouses and brutally butchered and then eaten up by animal eaters in a ‘civilised’ manner.