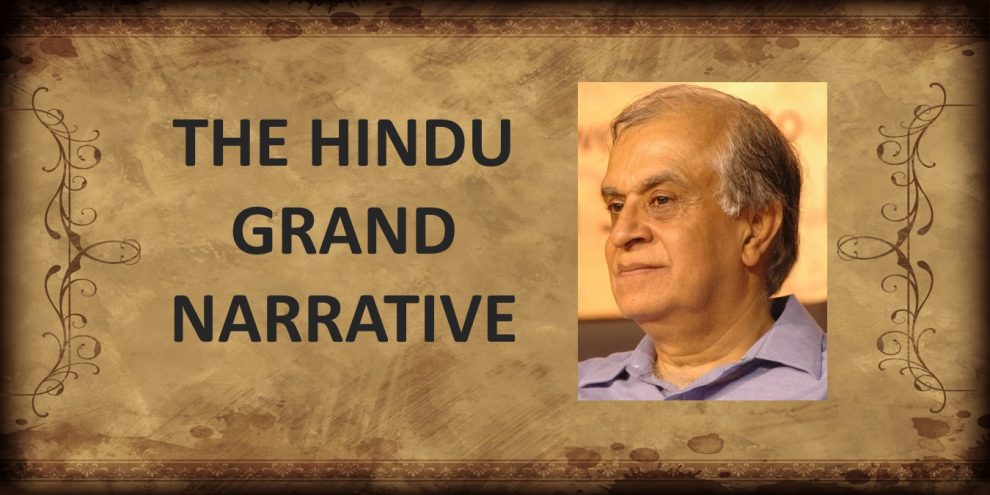 Intro: Without the Hindu grand narrative as the anchor and foundation, it is difficult to develop a viable narrative for India as a unified country.

Most major countries have a well-defined grand narrative that projects who they are as a collective identity. This is invariably a positive self-image based on carefully selected historical facts, mixed with exaggerations and even outright falsehoods. For examples, US students learn with great pride of their founding fathers – but Thomas Jefferson’s lifelong practice as a slave owner is not mentioned. Similar narratives of pride are the staple of education and media portrayals in France, Britain, China, Japan and Russia, to name a few. Besides modern countries, the Abrahamic religions each have their own clear-cut grand narratives, each premised on a singular historical event recorded in the corresponding holy book. Such narratives serve an important function in establishing collective identities, the ideals worth aspiring, and a broad trajectory—both for interpreting the past and guiding the future.

Unfortunately, I find Indians, especially Hindus, confused about this matter, often in denial about its significance, and even outright hostile to the very idea of having such a narrative. Many elites in Delhi have criticised my suggestion for narrative debates and discussions, calling such an activity divisive. They see India through the lens of fragments, with separate and conflicting narratives, and Hinduism as the scourge inflicting our society’s health and viability.

I have written extensively about the Hindu grand narrative as an open architecture. It is adaptive and fluid, accommodating to fresh ideas and new members. It is based on the discoveries made by rishis in their inner laboratories through adhyatma-vidya (inner sciences). The Hindu inner sciences are now at the cutting edge of research in neurosciences in the West, where the Hindu sources tend to be erased as part of the frenzy for appropriation. The fields of medicine, self-improvement and management are each benefiting in major ways from the goldmine of Hindu ideas. Sanskrit is a language of the future, not a museum relic from the past.

Such a profound narrative is more like science (of the inner domain) than like a typical “religion” in the Abrahamic sense. It is free from aggressive mandates by an angry God demanding violence against non-believers. It is free from claims of exclusivity that have caused much of the world’s violence for several millennia. Rather, the open architecture is a network that hosts a multitude of smaller narratives introduced by diverse communities.

For instance, the notion of ishta-devata (“my deity”) is a powerful foundation that supports Hinduism’s broad spectrum of deities and paths in a harmonious manner. I can worship the ultimate reality through my ishta-devata, and I have no issue with someone else worshipping through their different choice of deity. However, such respect must be mutual: the other party must also respect people’s right to choose different deities and paths. This means that exclusivity claims of religions are to be rejected as dangerous devices that invariably bring tensions, and eventually turn violent.
The open-architecture of Hinduism is an example of Hinduism’s unique and valuable contributions to the modern world. It is not only the fabric for India’s pluralism, but is also exportable as a model for harmonising various other world religions and ideologies.

For instance, neither Christianity nor Islam has the internal resources to reconcile their theological conflicts with one another, without one side defeating the other. Only through an open architecture could they ever expect to achieve the much needed harmony between them. Of course, this would necessitate reinterpreting their holy books without dependence upon exclusivity claims or hostility towards infidels.

Another vital quality of Hinduism is its openness to critiques and change. New smritis are to be developed for each epoch, and old ones reinterpreted and adapted to different contexts. Unlike other major religions, Hinduism has never had a conflict with scientific discoveries. It has not fossilised into fixed dogmas of the kind that enslave the members of many other faiths. Hindus have been able to get out of dilemmas and predicaments by creatively applying their own internal resources.

It is a common misunderstanding that Hinduism does not engage the external world in a positive way. It is alleged to be “world negating” and a form of escapism from the challenges facing society. Hence, the criticism goes, Hindus neglect their poor, sick and other suffering fellow humans, because they are only interested in pursuing an escape from empirical reality. Such interpretations are false. Prominent Hindus have always been deeply concerned about alleviating suffering, and have pursued the development of society in practical ways. That is why there was so much advancement in medicine, sophisticated architecture and civil engineering, as well as in social and political thought. Artha (material prosperity), kama (legitimate desires) and dharma (engagement at various levels) are all included as parts of Hinduism. Moksha is only of the legitimate pursuits.

The name “Hindu” might be relatively modern, but the entity it represents is very ancient and has a long history of continuity. I am writing a book on how Hinduism has already impacted other major faiths profoundly, even though these appropriations tend to get disguised.

We need to introduce texts like Mahabharata, dharma-shastras, artha-shastras and raj dharma discourses into mainstream teaching and debates. Sadly, Hindu leaders have limited themselves too much in what they teach. Much of the vast repertoire of resource material is being neglected.

Without the Hindu grand narrative, it’s difficult to build a viable narrative for India as a unified country. There are many divisive narratives at work in the opposite direction. My book, Breaking India, explains the dangerous nexus between internal fragments and certain foreign entities, which are operating as centrifugal forces pulling India apart.

Meanwhile, the West, China and Islam each have their own powerful grand narratives that are competing for global market share. India is a prime target for each of these nexuses competing to export its own grand narrative worldwide. In fact, India is the largest soft target available to them for expansion. Because India lacks a sufficient consensus on what its grand narrative is, it is highly vulnerable to these forces. Though aspiring to be a global power, India has not invested in the development and public discourse of its core narratives. In fact, there is not enough appreciation among its elites on the importance of this issue.

While China controls the discourse on its civilisation, India has largely abandoned the fields of India Studies and Hinduism Studies to outsiders. The British Orientalists dominated such research in the colonial era. Now it is American Orientalists who have taken over this role. Indian scholars have been bought off as junior partners in this enterprise, supplying their foreign sponsors with data that fits into American theories and agendas. The most prestigious journals and university degrees on Indian civilisation are located outside India, and are under the control of Westerners. The Indians involved tend to be appointed and supervised by Westerners. Many Indian universities take great pride in importing Western models into the humanities and social sciences. This is not a recipe for becoming a superpower, but a recipe for the mental re-colonisation of India. It will produce a nation of mental coolies looking to impress others as a way to feel legitimate.

Far too many Indian intellectuals are basically regurgitating and parroting Western thought which they have been trained to disseminate. Suffering from inferiority complexes, some Indians are uncomfortable articulating publicly what bothers them privately. Those who raise such issues and call for open debates typically get branded in Indian mainstream forums.

I see this as a crisis of Hindu leadership. Many of our leaders lack the intellectual sophistication that comes from purva-paksha (reversing the gaze) of the West, China and Islam, and from years of encounters. They thrive in cocoons with “like minded” people. They fail to get out of their comfort zones to get the required experience in the intellectual kurukshetra. As a result, there is shoddiness and lack of rigor in research on civilisations. Such leaders tend to be bombastic and dismissive of opponents, rather than studying them seriously. I find our youth searching for mentors and leaders, and becoming restless about the present state of affairs. Such youth are our hope, provided we can upgrade the caliber of our leaders.

The Hindu grand narrative must become a major topic for forums, such as conclaves, literary festivals and television discussions. It is a serious discipline and not a matter of chasing the latest sensational news item. It requires competent intellectuals and think tanks with a long-term commitment to pursue the issues professionally.