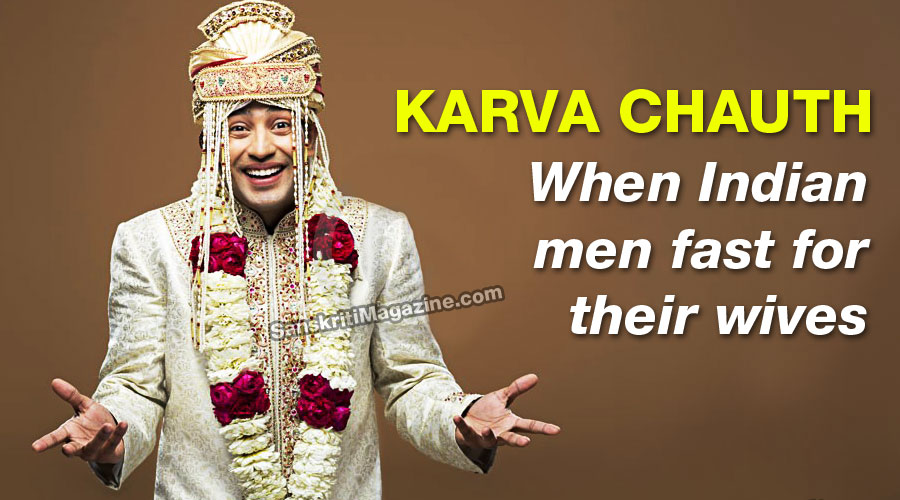 Although the popular tradition involves married women fasting through the day and praying for the good health and longevity of their husbands, the celebration of this festival has several other layers to it.

If you are a Bollywood buff, or a Hindi television soap addict, you will definitely be familiar with Karva Chauth.

This festival, which is celebrated with great gusto in many parts of the country, especially North and Central India, falls on the fourth day in the month of Kartik according the Hindu calendar. This means it usually takes place in October or November.

On this day, women fast from sunrise to moonrise and pray that their husbands be blessed with a long life.

Though one may argue about how the festival originated, the katha (story/fable) that is read during the prayers said on this day revolves around Queen Veervati.

There are many variations to this tale — some from the Mahabharata and a few that revolve around Shiva and Parvati — but their focus remains the same.

These legends, however, don’t seem to hold much attraction for Generation X.

No longer is Karva Chauth a fast where the wife prays for her husband’s health and long life. It has evolved into a ritual that celebrates and honours the marital relationship.

‘I am a great believer in the equality of the sexes’

With the changing times, it is inevitable that rituals undergo a metamorphosis as well.

Today, Karva Chauth is not limited to women.

Thanks to movies like Dilwale Dulhaniya Le Jayenge and Kabhi Khushi Kabhie Gham, the popularity of the festival has increased multifold.

Men too display their love and appreciation for their partners by joining them in this fast.

Karva Chauth is no longer a traditional compulsion; it has become a day during which married couples celebrate each other.

Anuj Khurana, a 33-year-old entrepreneur from Goa, says, “I fast during Karva Chauth because I feel strange that my wife Avanti is not eating while I am. We keep telling each other not to keep the fast and we both end up doing it.”

Avishek Das, 35, who works with a global alcohol brand in Bengaluru, is Bengali but keeps this fast. He says his love for his beautiful model Punjabi wife urges him to give her company on this day too.

Avishek smiles, “I am a great believer in the equality of the sexes. It is sad that the woman (wife) has to make a sacrifice (remain hungry) for her husband’s long life. Why can’t it be the other way round? In a society that is already patriarchal, it would be lovely if the husband gave his hungry wife company and they broke bread together at the first lunar glimpse. That’s why I do it.”

“Of course, I don’t believe it will help either of us live longer. It’s just a tradition that she likes to follow and I simply join in rather than feasting while she remains hungry. It’s my way of showing gratitude,” says Avishek.

‘In ancient times, people would observe fasts as penance for their karma’

While some, like Anuj, join their wife in a visit to the temple on this day, Anant Berry, 30, who got married only last year has different reasons for following the Karva Chauth fast.

The Delhi-based Anant explains, “I fast because, all through the year, we eat everything that is placed in front of us without giving our system a break. This way, I give my system a forced break and let it relax for a day.”

“In ancient times, people would observe fasts as penance for their karma. I believe in that as well. I have been observing fasts since five years without any intent. After I got married last year, I fast on Karva Chauth,” he smiles, seemingly pleased at the double benefit.

During Karva Chauth, the women usually observe the rituals and do the puja.

The men, even as they go about their business, conserve their energy and try to avoid having too hectic a day.

Although Sikhism does not endorse fasting, Karwa Chauth is popular among Sikhs as well

Love transcends boundaries, as is evident by the love that literally shines all the way from Melbourne, Australia.

On condition of anonymity, a Gujarati wife gushes about her Sindhi husband who keeps the fast with her twice a year — once on Karva Chauth and once on Sindhi Karva Chauth.

This is a private pact between them, and like many other couples, they don’t talk about his involvement and display of unwavering affection.

Though Karva Chauth is a Hindu tradition and Sikhism is strictly against any ritual or fasting, it is surprisingly popular amongst Sikhs as well.

Binwant Singh, who owns an HR consultancy in Delhi, maintains the Karva Chauth vrat every year.

The 62-year-old wakes up at 5 am every Karva Chauth and gorges on food that keeps him going through the day as he fasts for his wife.

His best image of Karva Chauth, he says, is of his beautiful wife draped in a red sari with a bindi on her forehead.

The trend of men joining their wives for the Karva Chauth fast is becoming increasingly popular.

However, it still remains a private pact between the couple; it is not something they tom-tom from the rooftops.

“I don’t really do this for anyone’s approval. I fast for my wife’s happiness. That is, perhaps, why I don’t tell people I do this,” says Rahul Tiku, a 27-year-old Kashmiri trader.

“Some of my friends also fast, but they don’t want to share this fact with their family or friends. Men displaying affection so openly is not something our society is used to.”