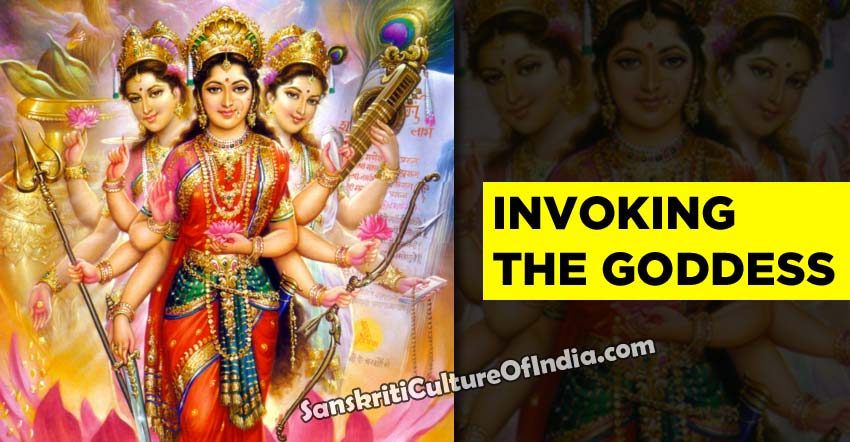 According to the Puranas, when Brahma creates the world, the Goddess appears as Saraswati, embodiment of knowledge, serene and aloof, dressed in white, holding a lute and a book, riding a heron. When Vishnu sustains the world, the Goddess appears as Lakshmi, stunning and alluring, dressed in red, bedecked in jewels, holding a pot that pours out gold and grain, riding an elephant that rises from a lotus lake.

When Shiva destroys the world by shutting his eyes to it, the Goddess becomes Shakti – alternating as the naked and bloodthirsty Kali, who danced on his still body, and as the demure and maternal Gauri, who made him open his eyes with her affection.

Now observe carefully. The Goddesses are associated with nouns: knowledge, wealth and power. The Gods are associated with verbs: creating, sustaining, destroying. Knowledge/wealth/power can be created/sustained/destroyed. Knowledge/wealth/power provides the capability to create /sustain/destroy. Action is with the Gods — the result of the action is the Goddess who in turn provokes more action.

God is the subject; Goddess the object. Before we jump to outraged gender-based conclusions (“ the scriptures are patriarchal and that is why they portray God, hence men, as active and Goddess, hence women, as passive” ), note that Gods and Goddesses are embodiment of non-gender based concepts that seek to enlighten, enrich and empower. A leader, whether it is a man or a woman, is God — the organisation is the Goddess.

God and Goddess, leader and organisation, cannot exist without the other. Without either there is neither. He or she can only create, sustain or destroy . What is created, sustained or destroyed is knowledge , wealth and power, which in turn offers more opportunities to create, sustain and destroy.

We often find fly-by-night operators in the business world who find validation in making that quick buck. These are the Brahmas of the world, desperate to get rich quick, without thinking about sustainability.

A good leader is a Brahma who creates Saraswati — knowledge. Knowledge manifests as innovation and ideas and inspiration . That is why Saraswati holds not just books and memory beads but also the lute with which she makes music. Knowledge appearing as insight provokes a systemic transformation in people. A good leader is constantly seeking wisdom, within himself and others.

Once Chandragupta was very hungry. The moment rice was served, he put his hand right in the centre of the pile. His fingers got singed and he withdrew instantly. “Never from the centre, child,” said his guru, Chanakya. “Always from the sides where it is cooler.” Chandragupta realised his master was not telling him about rice alone. He was warning him against his planned attack on Pataliputra , the capital of the Nanda Empire. It was a well guarded fortress. Better to go from the sides, conquer the surrounding , less formidable territories and gradually move in on the centre of power.

This insight made Chandragupta a great general. He was able to overthrow the Nandas and become ruler of the Magadhan Empire. It was knowledge that made him king of a prosperous king. His hunger for wisdom made knowledge appear before him. By becoming Brahma, he discovered Saraswati and so was able to become Vishnu with Lakshmi manifesting as his crown and kingdom.

It is said that Vishnu keeps Saraswati on his tongue. This makes Lakshmi jealous. She rushes towards him and plants herself in his heart. Vishnu knows that the fickle Lakshmi will leave as soon as Saraswati leaves his tongue. Thus to sustain Lakshmi, he needs Saraswati. Good leaders know that to sustain their business they constantly need to inspire, motivate people and at the same time innovate new products and services that will delight the customer. Lakshmi will come into the company where Saraswati thrives.

With knowledge and wealth, comes power and arrogance. The belief that one is invincible and capable of doing anything. When this happens, the organisation becomes naked and bloodthirsty – provoking the leader to act rashly and indiscriminately, indifferent to all rules of conduct, making him believe that he is above the law. In other words, the organisation becomes Kali. A good leader recognises this rapidly and becomes Shiva.

He has to destroy the rising ego and arrogance that blinds good judgement. He shuts his eyes and lies still, allowing the Goddess to dance on him but refusing to respond to her. Only then the Goddess becomes Gauri — dressed in green, she becomes maternal and affectionate , and with gentleness she requests Shiva to open his eyes and become Shankar, the benevolent, boon-bestowing , wise ascetic. Thus a good leader has to be fully sensitive to the corrupting influence of power — and try hard not to succumb to it.

Ultimately to establish a knowledge, wealth and power generating organisation, a leader has to be a teacher, a king and an ascetic all rolled into one. When the three Gods thrive inside, the three Goddesses will thrive outside.