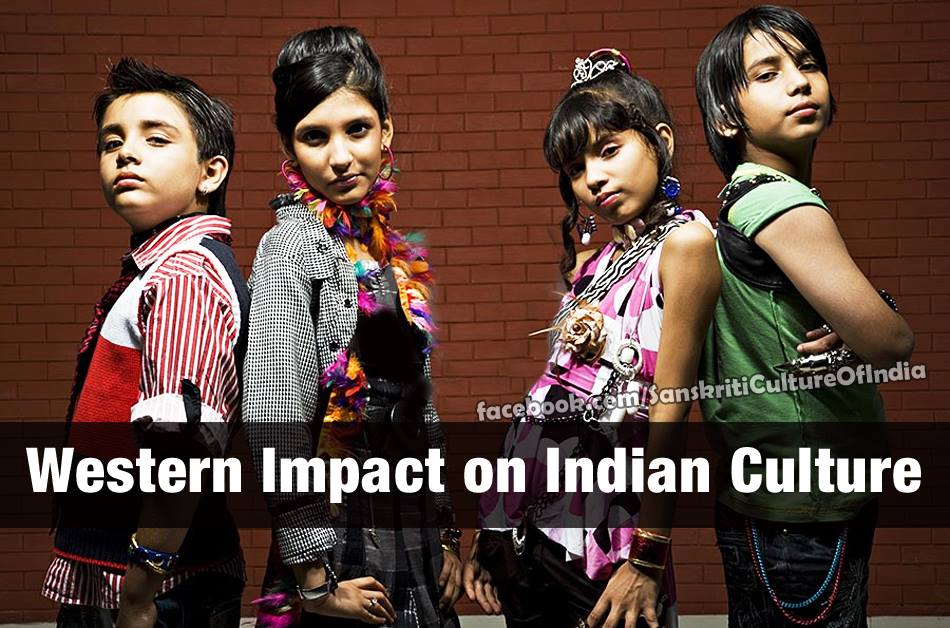 Indian Culture, which is one of the oldest & richest cultures, is now under serious threat as western culture is making its strong base in India and slowly and gradually wiping out the Indian culture. It had already made its presence in Metro’s & now slowly heading towards other parts of India. Westernization has greatly affected our traditions, customs, our family and our respect and love for others.

The concept of joint families is fading fast, and everyone wants to remain aloof. Now nobody is interested in other’s affairs and only cares for himself which is totally contradictory to our Indian culture that teaches us to be a part and parcel of the society, sharing each other’s Joys and sorrows. All our rich values and traditions are slowly dying down, Western Culture is taking its place. People are blindly following it without knowing the consequences.Westernization has given rise to single families.

Marriages are breaking & our tolerance and patience has exhausted. The most affected are our new blooms, which have yet to sprout. They find themselves stressed and isolated in this new atmosphere, since there is no one to take care of them. They no more get the care and love of their Grandparents. They find themselves in crutches to be taken care by others. It is very unfortunate that the new sprouts remain untouched and cut off from our great moral values and sanskaaras. In today’s Scenario both husband & wife are working.

There is no one at home to look after them and to cultivate the sanskaaras in them since our elders who use to give these sanskaaras to their grand children are no longer with them. In many cases it is not deliberate but in majority of cases the children prefer to remain away from their parents which is very unfortunate.

There’s no harm in taking good things from the west, but this does not mean that we should become slave to their culture, and misrepresent our identity. It is understandable that India is a growing country, so it is necessary of knowing all the cultures and their traditions. To some extent it is fine, but it is wrong to pretend and behave like Westerners and discard our own culture. We have to preserve our identity.

It is shocking to see that Indians are forgetting their culture. On the contrary westerners are looking towards Indian spirituality for solving their personal, social and national problems. They are coming to India to find peace through Yoga and Meditation. India has earned a good name in the field of Yoga and Meditation abroad. Our gurus are giving teachings to westerners how to relax & how to keep themselves fit and away from diseases.

It is very unfortunate that today’s generation has very little knowledge about their culture, traditions and roots. This is not their fault but the fault of their parents who do not enlighten them about their roots, rich cultural and heritage. Contradictory to it, Parents feel proud in giving their children western Sanskaras, and they are brought up in western atmosphere. Thus, they are kept miles away from Indian culture.

There is no harm in giving knowledge of other cultures and traditions as Indians have made their presence in every part of world, but it is necessary that they should have knowledge of their own culture, traditions and language. We should also take care that our new sprouts are well versed with Indian culture and its values. It is the responsibility of parents to cultivate our rich culture and heritage in their children.

No doubt the western culture is versatile and teaches self-dependence, but this does not mean that we should forget our culture and blindly follow the westerners. We should always feel proud that we, the Indians have such a rich cultural heritage which is very rare and should be carried forward and cultivated in the minds of our New blooms who are going to be our future.

Scientists Rediscover Benefits of Bhang Revered in Ancient India
How Old is the Word ‘Hindu’?
Comment