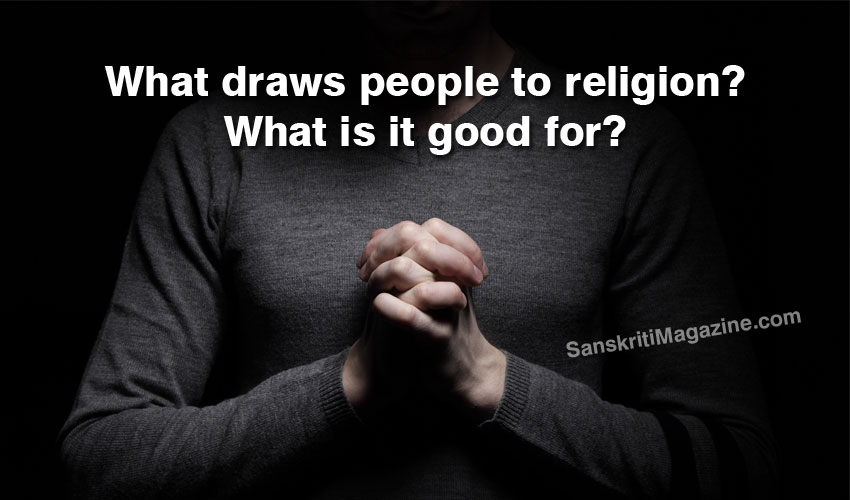 In many parts of Europe, religion has become an important topic only in the last few decades. In the 1970s, religion or rather Christianity, which used to mean religion then, seemed obsolete. It was considered something for children and old people. Ever since Christians got the freedom to leave the Church not so long ago (in the 19th century in northern Germany), many did so. And after cosmonaut Yuri Gagarin came back from space and declared that he had not come across God, the Church lost out further.

Just an example: when I was a child in the 1950s, in our small town mass was held every day at 6.30 a.m., at 7 a.m. and 3 times a week at 8 a.m. Since long now, there is no daily mass. Only the three services at 8 a.m. have survived. When I was a child, three hours of fasting were mandatory before taking Holy Communion. Now it has been scaled down to half an hour. Earlier, missing Sunday mass was a grave sin that would be punished with hell fire. Now one can attend it on Saturday instead of Sunday.

Religion seemed on its way out, yet suddenly it is back and very prominent in the public discourse. The main reason is the increasing visibility of Islam in Europe. When the first Turks came to Germany as “guest workers“, it was considered great that our boringly uniform society turned “multicultural”, with more interesting looking people on the streets. Meanwhile this enthusiasm has dimmed considerably. Chancellor Angela Merkel admitted that the multicultural experiment has completely failed.

It is for the first time, after Christianity had crushed the pagan faith in Europe, that the locals are confronted in their midst with a substantial population of followers of a different religion, which, as aggressively as Christianity, proclaims that it alone is the true religion, and whoever does not join it, is damned to hell forever. Moreover, many of those followers seem to take their religion really seriously.

This jolted Germans who did not identify foremost with being Christian anymore.Yet apparently, now they feel the need to counter Islam with Christianity. Angela Merkel exhorted Germans to go back to Christian values. In 2011, she invited the Pope to address the Parliament. While strolling through Munich city on a Sunday morning last winter, I saw many, including, fashionable youngsters, streaming into a big old church. Later I came to know that the priest of this church was verypopular.Yet even in the small town where my mother lives, I saw many young parents take their kids to church for the children’s service. It would have been an unusual sight in the 1970s, when those same parents would have opted for a picnic instead.

The most important point is in all likelihood an intuition in human beings that there is a higher, unfathomable power that is the cause for this vast universe and is also the cause for our own existence. Further, there is an intuition that this power somehow knows us and even guides us in life by this small voice of our conscience. There is an inner communion possible, be it through prayer or a feeling of awe.

This intuition makes sense. It is natural and does not require the label of “religion” and for many thousands of years it never had this label. The logical consequence of this intuition was to search for that power in oneself and outside. It prompted people to become mystic sand scientists who pondered on what is true. We know that this went on for ages in the Indian subcontinent as many invaluable ancient texts are preserved.

However, in the last 2000 years of the long human history, this intuition that there is a higher power was exploited to promote ideologies that claim supremacy and strive for world dominion. An elaborate story was invented about this higher power. It was called “God, the Father”, and it was claimed he had one son and had sent this son down to earth, etc.To make matters worse, it was declared that this story is the only truth, and everyone has to believe it. As soon as Christianity became state religion of the Roman Empire, its followers rolled over mystically inclined locals and forced their belief on the people of vast areas in Middle East, North Africa and Europe.

A few hundred years later, another story was woven around this higher power. It was claimed that this power has spoken again through a prophet, and this was for the very last time that it has made its Will known. No more direct message from the highest power in future. Unfortunately, here too, this story was declared as the only truth and everyone has to believe in it.

It did not take long and the followers of those two different stories were at each other’s throat with each one claiming that the highest power wants everyone to believe their story and not that of their rival. Obviously, the highest power was misused as a front for gaining world dominion.The second story got in many areas soon the upper hand “with fire and sword”, as we can unfortunately vividly imagine. And of course, it did not bypass the wealthiest land on earth at that time – India.

Both these stories were called “religions”. In fact, Christianity and Islam are the main religions that come immediately to one’s mind when one hears “religion”. Hinduism is often not even mentioned when religions are listed, and this should be taken as a compliment.

In the Indian tradition, the intuition that there is a higher power was not exploited to enforce belief in one story as the absolute truth and to rule the world. Here, not one story, but innumerable stories developed. These stories exist peacefully side by side. Devotees of Ram, Krishna, Shiva, Ganapathi, Devi, etc., are reminded that they must never be narrow-minded as Ram himself worshipped Shiva, etc.

In India the natural, mystical path was pursued. The Rishis pondered deeply and came up with profound insights. They defined absolute truth as That which is always – in past, present, future, and which shines out of itself. Is there anything that fits this definition, as the whole universe obviously does not qualify as being absolutely true? Yes, there is, the Rishis declare: Pure, thought-free consciousness is absolutely true. But to really know this as true, everyone needs to find out in himself.

Neither Christianity nor Islam has a solid philosophical basis. They consider as absolutely true what simply cannot be absolutely true: a story about the Highest does not qualify as That which always is, as it depends on thoughts. Further, the claim that the Highest, by whatever name it is called, is a separate entity apart from creation is scientifically not tenable.

Not surprisingly, those religions, which don’t have a solid philosophical basis, rely on force and on catching young, impressionable minds. They expanded their reach by violence and kept their flock in check by brainwashing children and by threatening the adults with severe punishment if they dared to disagree with the story/ dogma that had to be accepted blindly as truth.

Ever since Christianity lost its power to enforce blasphemy laws and punish heretics, it lost followers. Nobody knows how many Muslims would leave Islam, if heretics were not punished and there were no blasphemy laws in place.

In contrast, the Hindu tradition has no blasphemy laws and does not need any. Its philosophical basis is solid. Even in the face of danger to one’s life under Muslim rule and of being exposed to ridicule under British rule, most Hindus held on to their tradition.

However in independent India, an insidious teaching that “all religions are the same and deserve respect” did a lot of harm and enticed many to convert for some benefits. “Respecting other religions” was said to be in tune with Hindu values, not realizing that it meant respecting those whose explicit goal is to wipe out Hindus.

Clearly, something is wrong with religions that need to threaten their followers with grave consequences, whether in this life or in the afterlife, if they dare to question the story they have been told to believe as the only truth. Further something is clearly wrong with the claim that the Highest is partial towards one group and will be exceedingly cruel to all others in his creation – letting them burn in hellfire for ever and ever.

Some Christians realized this and also dared to say it. Voltaire suffered in prison for his outspokenness. One of his comments is still highly relevant. He said, “Those who can make you believe absurdities, can make you commit atrocities.”

Mark Twain also called the bluff of the organized, dogmatic religion. He said, “Religion was born, when the first conman met the first fool.”

However, dogmatic religions are still going strong. Too few people question. Too few dare to look closely. Too few object to the outrageous claims that are made. Is it not outrageous to claim that Hindus, Buddhists, Jains, Sikhs, will burn in hell if they don’t convert? If a cricketer is not allowed to say this on the field, why are preachers allowed to spread this “absurdity” all over? Does it not encourage those who believe it to commit atrocities?

Those who had the good fortune to grow up in the Indian traditions, which allow freedom of thought and a genuine enquiry into truth, need to be alert and guard this freedom. If this freedom is lost, humanity will be truly miserable.

Sadly, it is lost already in many places on this earth. Saddest of all, it is lost in what is today Pakistan and where thousands of years ago human civilization had reached great heights.