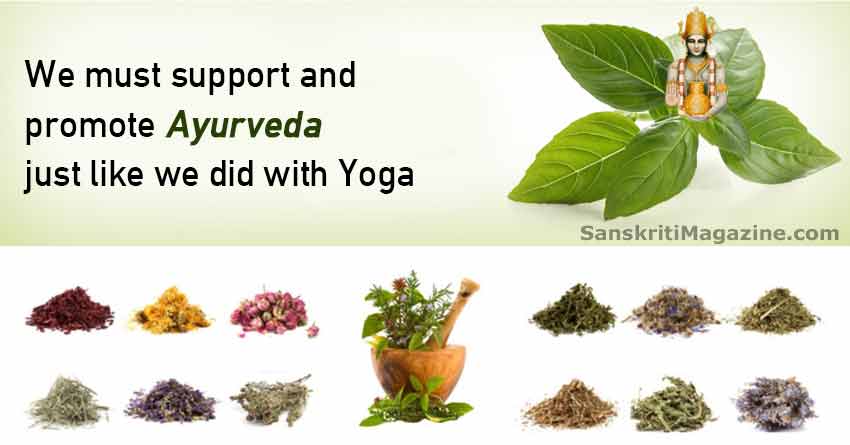 Today we see a Nobel Prize awarded for work in traditional Chinese medicine. This raises the question why ayurveda is not afforded the same consideration, not only worldwide but also in India?

Ayurveda is as profound and sophisticated as traditional Chinese medicine and shares a great deal with it, particularly relative to the role of prana (chi in the Chinese system), with both viewing the human being as an intricate system of energy patterns, much like modern physics and its view of the universe. Both recommend herbs as their main healing modality, including special tonic and rejuvenative agents to improve longevity, immunity and higher awareness. Both are based upon ancient medical texts and have in depth methods of diagnosis and treatment. The two are regarded as the oldest and most extensive natural healing traditions in the world.

Yet while the communist government of China supported the traditional medicine of the country as the medicine of the people, the government of India did not so favour ayurveda, until the current Modi administration, and instead emphasised modern medicine to the point where ayurveda was marginalised.

Meanwhile many Indians have taken up the study of modern medicine and immigrant Indians now represent a significant percentage of doctors in the US and UK. Yet while Chinese doctors usually support traditional Chinese medicine, few Indian medical doctors have seriously taken up the cause of ayurveda.

Yet ayurveda has spread in spite of all this, with ayurvedic books, programmes and treatment centres available in most countries of the world today. This has happened mainly because ayurveda has been promoted by independent groups – particularly those working in yoga, ayurveda and meditation fields, who have introduced ayurveda globally as a transformative and futuristic system of mind-body medicine.

Yoga in India is closely related to other traditional disciplines, particularly ayurveda. When yoga texts speak of health, they employ the ayurvedic terminology of doshas (biological humours), agni (digestive fire), the five pranas or types of vital energy, and related factors. Yoga by itself is not a medical system but a spiritual practice, such as is explained in the Yoga Sutras. Yoga has no disease theory or system of diagnosis of its own. For this it has relied upon ayurveda.

Ayurveda takes the yogic view of consciousness and applies it for healing purposes. It teaches a yogic way of life as an ideal means of both health and happiness. Ayurveda recommends the daily practice of yoga, not just asana but also pranayama and meditation, for harmony of body and mind. If we are looking for a yogic system of medicine in terms of both diagnosis and treatment, we find that already beautifully structured in traditional ayurveda.

The complication is that because of the suppression of ayurveda during the colonial era, when yoga spread worldwide during the 20th century, ayurveda was not usually part of it. And while India at Independence brought ayurveda back to some degree, it removed most of its connections to yoga in an effort to make it more acceptable to modern medicine.

The yoga and ayurveda connection only became popular during the last few decades when various spiritual groups, starting with Maharishi Mahesh Yogi, began to emphasise it. Swami Ramdev has recently revived yoga and ayurveda in a major way in India, making the connection widely known.

As someone who has worked in the field of yoga and ayurveda for over 30 years, I am happy to see this extraordinary progress of ayurveda, but it still has far to go to realise its full potential. Greater support is essential for ayurveda to gain the recognition it deserves, and to encourage more people to follow and benefit from its life-changing practices.

Health care is the fastest rising cost in the world today. Drug-based medicine is unaffordable for poorer countries like India and problematical in the West, with numerous damaging side effects. Drugs should be the last rather than the first means of treatment, beginning with natural healing methods like yoga and ayurveda instead. Special ayurvedic methods of oil massage and Pancha Karma, such as are popular in Kerala, can remove disease-causing factors before the disease even manifests.

India should not over emphasise drug-based medicine and be forced to return to ayurveda later. The country should honor its own great tradition of natural healing through ayurveda, which is helpful to everyone, just as it is embracing yoga.