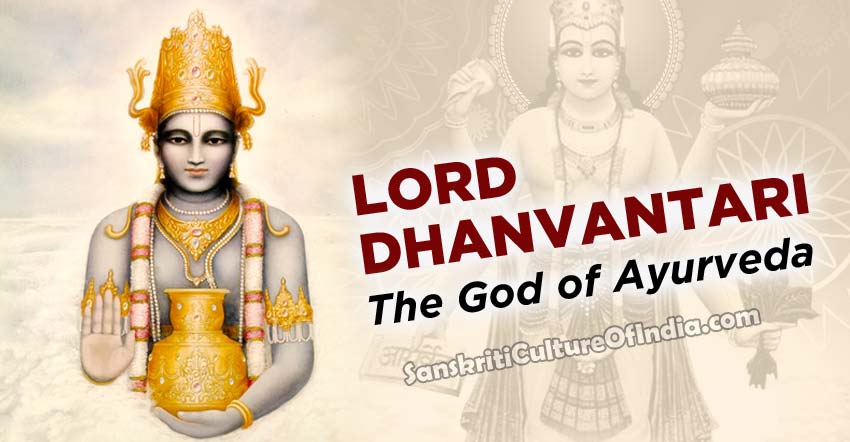 The origins of the ancient healing science known as Ayurveda are lost in cosmic antiquity. According to the ancient text ‘Charaka-samhita’, this “Science of Life and Longevity” is eternal and is revealed in each universe in each of its infinite cycles of creation and destruction. According to Hinduism, this healing science is generally revealed by great sages or Demigods and occasionally, the Supreme Lord Vishnu Himself who descends as the avatara (incarnation) Lord Dhanwanthari and re-inaugurates the tradition of Ayurveda. Information about this extremely rare appearance of the God is found recorded in the Vedic literature of ancient India.

The First Appearance of Dhanwanthari

According to Hinduism, he first appeared during the great churning of ‘Ksheera saagara’ (the cosmic milk ocean) to deliver Amritha (the divine nectar of immortality or Ambrosia) for the nourishment and rejuvenation (out of the ageing curse) of the Demigods. The churning of the ocean of milk is a famous episode in the Puranas that represents the spiritual endeavour of a person to achieve Self-realization through concentration of mind, withdrawal of the senses, control of all desires, austerities and asceticism (it is still celebrated in a major way every twelve years in the festival known as ‘Kumbha Mela’). The story is related in the ‘Srimad Bhagavatam’, a major work that describes the ‘avataras’ in great detail. Kalpavriksha (the wish fulfilling tree), and Shri Lakshmi (the Goddess of Wealth) also emerged from the churning of the Ksheer Sagar (the cosmic ocean of milk).

As they continued churning, a very wonderful male person appeared. The Bhagavatam tells us, “He was strongly built; His arms were very long, stout and strong; His eyes were reddish, and His complexion was black. He was very young, He was garlanded with flowers, and His entire body was fully decorated with various ornaments.” Lord Dhanwanthari was “dressed in yellow garments and wore brightly polished earrings made of pearl. The tips of His hair were anointed with oil and His chest was very broad. His body had all good features, and He was stout and strong as a lion. In His four hands, He carried an ‘Amrutha kumbha (jug of holy nectar) along with ‘Sankhu’ (a holy conch shell), ‘Sudarasana Chakra’ (The divine weapon-disc of energy) and ‘Jalooka’ (leech used for treatments)”. The story ends with the Demigods taking the nectar, drinking it and getting invigorated with the eternal energy.

Around 600 BC, Lord Dhanwanthari took incarnation again as the son of the King Dirghatamas of Kasi in the royal household and became known as Kasi-raja Dhivodasa. He developed ascetic tendencies even as a young boy and started teaching Ayurveda seeing the misery of human beings afflicted by disease on earth. He taught Ayurveda to the sages and rishis (seers) who became his disciples. Later He prepared the ‘samhitas’ (the great texts) on Ayurveda in eight divisions (Ashtangas) for the benefit of humanity.

Lord Dhanwanthari’s teachings are recorded in the Agni Purana 279-289, as well as through the teachings of His disciple ‘Susrutha’ – one among the two master scholars of Ayurveda (along with ‘Charaka’) and who is still revered to as the ‘Father of Surgery’. The ‘Bhagavatam ‘states “smritha-matrarti-nasanah” – one who remembers the name of Dhanwanthari can be released from all disease. Even today, in India, Deepavali (Diwali) – the Festival of Lights, inaugurates with remembrance of Lord Dhanwanthari. For such, during dusk time, a lamp pointing toward North by North-East is lit at the entrance of the door step. Such is the welcome to Lord Dhanwanthari to bestow on all for the health and the happiness in ensuing life.